Akilian Butler turns to "Boss" for help after injury

Akilian Butler spent most of his sophomore season on the sideline after tearing his ACL against Washington State. To help in his recovery, he decided to turn to man's best friend. 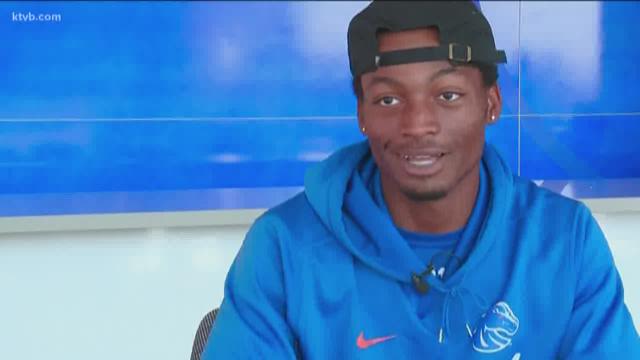 As he watched his teammates win the Mountain West Conference title and beat Oregon in the Las Vegas Bowl, Butler says he decided to do something a bit out of the ordinary, to put a nine-month-old in charge of his recovery.

A nine-month-old puppy, that is.

"He's in control," Butler says. "When I went to go pick him up, he came right to me, like he already knew I was going to buy him."

Butler says he decided to get a puppy to help keep his spirits up, to help him keep positive during a difficult time.

"It's good to come home and see someone that's happy to see you."

When he was finally cleared to run for the first time in February, it was Boss that Butler ran to.

"The first time I got cleared to run, that day, we went outside and we ran."

Fast forward seven months to Boise State's season opener at Troy. Suited up in full gear, Butler not only played for the first time in nearly a year but scored his first receiving touchdown.

"It felt really good," Butler says. "It's been a long time coming, and there's going to be more plays where that came from."

Just one week later against UConn, Butler again found himself in the end zone.

"For him to come back and have the touchdown, I think you could feel, when he scored, you could feel there was a lot of emotion on that," head coach Bryan Harsin says. "It wasn't just a score, it was 'I'm back.'"

Two games into the 2018 season, Butler says his torn ACL ended up giving him a new perspective on playing football.

"A good competitor loves a challenge. With those injuries and stuff, it's made me grind harder. It's made me want more."