What’s under the tree this morning for Andy Avalos? A more populated quarterbacks room, a less populated linebackers room, and, of course, COVID concerns. 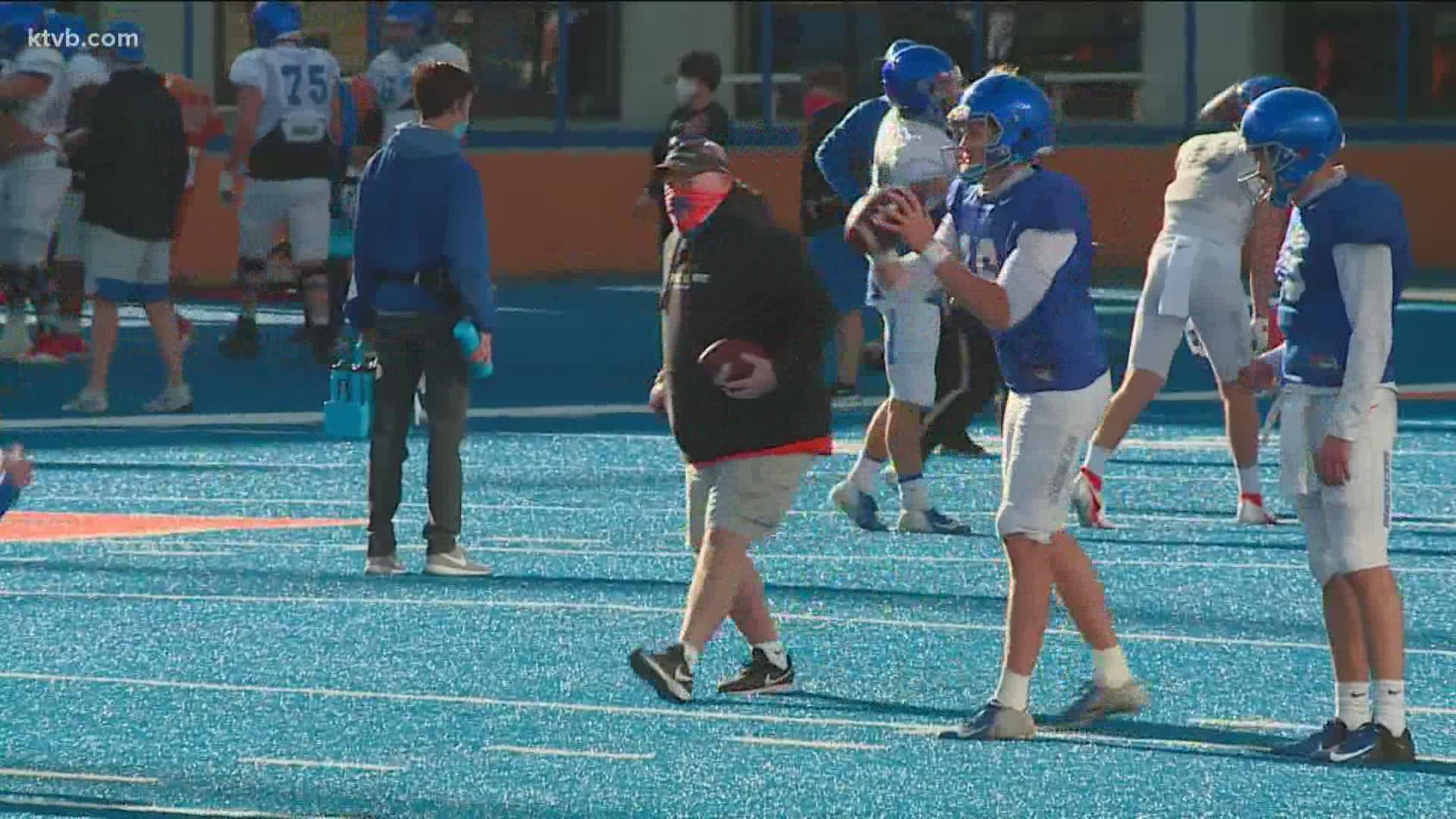 The nervous excitement was evident as Andy Avalos prepared to open his first fall camp as Boise State’s leader. The team convenes this morning for practice No. 1, 29 days before the season opener at UCF. Is this day strange now that he’s a head coach? “Through everything, it’s not a whole lot different,” Avalos said at his Tuesday press conference. It’s COVID that could put coal in the Broncos’ stocking. Avalos said the program is not yet operating the way it was before the pandemic. “Not even close,” he said. “The biggest opponent we’ll have this year is making sure we handle our COVID protocols.” Avalos added that Boise State’s vaccination numbers “are continuing to improve.” They weren’t good two weeks ago.

Avalos has been a lot more media-friendly than Bryan Harsin so far. But in one area, Avalos is going to batten down the hatches even more than Harsin did. When asked if there’s anyone missing due to injury at the outset of fall camp, Avalos said last season’s pandemic procedure would become the norm. “We are not going to speak about availability—or COVID (absences),” he said. “We’ll release that information 45 minutes before the game.” Ironically, Boise State announced last night that today’s practice has been closed to the media “due to positive cases of COVID-19 within Boise State athletics programs."

Talk surrounding Boise State position groups has been dominated by the quarterbacks (the competition between Hank Bachmeier and Jack Sears) and the cornerbackers (reloading after the departures of Avery Williams and Jalen Walker). But with word that transfers Brock Miller and Andrew Faoliu have left the program for personal reasons, it’s time to focus on the Broncos’ linebackers. That appears to be the thinnest position on the team now. The Broncos have two stalwart starters in Zeke Noa and Riley Whimpey. But everything beyond that is unknown. One of the heralded recruits of the 2018 class was D.J. Schramm out of Fresno. He’s now a redshirt junior with just 12 career tackles (although he does have a touchdown after scooping up one of Williams’ blocked punts last year). The time is now for Schramm.

There are two new quarterbacks on the roster—one we already knew about and one we didn’t—both from Southern California. The QB previously reported by B.J. Rains of the Idaho Press is Colton Fitzgerald from Saugus High in Santa Clarita, and the new reveal is Colt Fulton from Rancho Santa Margarita. There are now six quarterbacks on the roster. The other two are true freshman Taylen Green and Timberline High walk-on Andy Peters. The entire QB room has to be intrigued by a massive new Power 5 transfer: 6-5, 322-pound offensive lineman Will Farrar, who comes from Texas Tech. Sounds like Farrar has some protection skills.

GOODBYE TO THE ‘DECKS’ FOR NOW

Boise State’s summer conditioning wrapped up last Friday with the final running of the decks—the brutal scaling of the upper deck at Albertsons Stadium. This year the Broncos had to do it during the hottest stretch in the city’s history. “Decks” started just before the 100-degree streak that began in June, and the average high in July was 98.6 degrees. In the days of former strength and conditioning coach Jeff Pitman, the team would work its way up to as many as 20 reps on the decks. This year Avalos said the Broncos made it to 14, but there was an asterisk. The decks were timed for the first time. Ouch. Star wide receiver Khalil Shakir wasn’t keeping score. “I don’t even count ‘em anymore,” said Shakir at Mountain West Media Days. “I just keep running ‘em until they tell me to stop.”

Justinian Jessup’s first live action in front of Golden State Warriors note-takers didn’t go so well initially Tuesday night. Jessup started for the Warriors in the 3rd annual California Classic Summer League against the Kings in Sacramento and went 0-for-4 from the field (0-for-3 from three-point range) over the first 7½ minutes before coming out of the game. He finished with 11 points on 5-for-16 shooting (1-for-8 from deep) as well as six rebounds and four assists in the Warriors’ 89-82 overtime victory. Former San Diego State star Jordan Schakel also started for Golden State and put up 13 points. The Warriors play the Miami Heat’s entry tonight. Incidentally, fellow former Boise State standout Derrick Alston isn’t on the Sacramento squad; he’s slated to play for the Warriors in the Las Vegas Summer League.

PATTY EYES THE PODIUM IN TOKYO

Let’s stretch it here for a fringe Idaho tie in the Tokyo Olympics. Patty Mills, who made his professional debut in Boise with the Idaho Stampede in 2010, is representing Australia in the Summer Games in a big way. Mills is the fifth-leading scorer in the entire tournament, averaging 20.8 points per game going into the Aussie’s semifinal showdown against the USA on Thursday. The San Antonio Spurs guard played five games with the Stampede 11 seasons ago. In his pro debut, Mills scored 38 points with 12 assists on New Year’s Day 2010 in Qwest Arena. He followed two days later with a put-back with 1.2 seconds remaining to give the Stampede a one-point win. Mills was called up by the Blazers for the first time later that night.

At long last, Jerry Kramer is known for more than one of the most famous blocks in NFL history, as the former Idaho Vandal great is inducted into the Pro Football Hall of Fame in Canton, OH. Kramer, remembered for what was essentially the game-winning block for Green Bay against Dallas in the famed Ice Bowl in 1967, was also named to the NFL’s 50th Anniversary team, the All-Decade Team of the 1960s and the Super Bowl Anniversary Team. But he had been a Hall of Fame finalist 10 times and had never been voted in. was the 13th—and probably the last—of Vince Lombardi’s Packers to enter the Hall.