'We don't know the best-case scenario:' Central District Health on the risks of high school sports in Ada County

While CDH acknowledges the importance of youth sports, they also said believe there is a risk that comes with an attempt to practice and play. 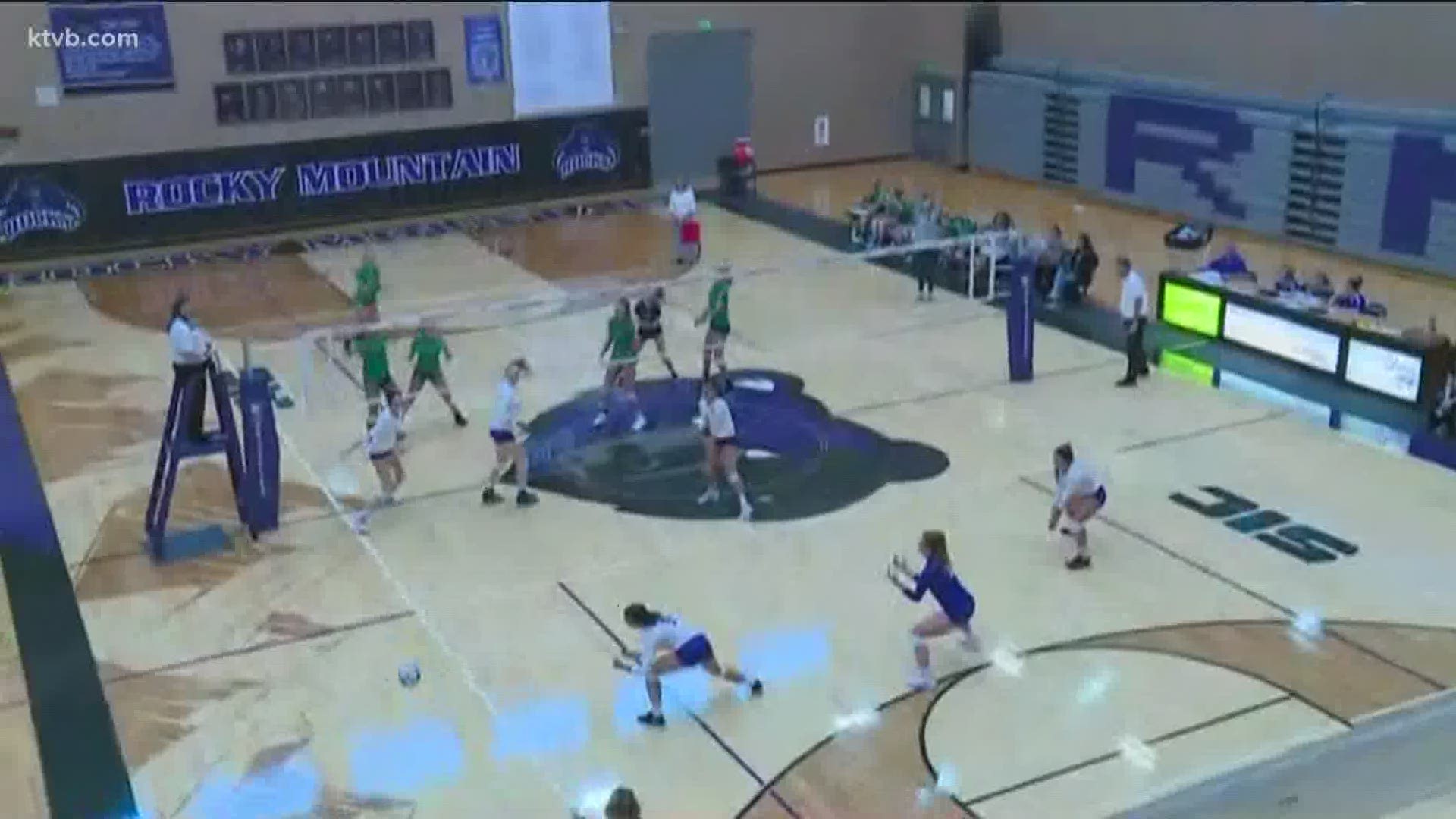 BOISE, Idaho — As the high school sports season attempts to ramp up in Ada County, the three school districts within the county are all operating at a different return to play pace.

In the Kuna School District, programs have been allowed to practice for weeks. The Kavemen football team is scheduled to host Lewiston this Friday.

Meanwhile, in the Boise School District, teams haven't logged a single practice together, and it wasn't until recently that they were even allowed to work out, so as long administrators limited interaction to groups of 10 or less. At a recent board meeting, members determined that practice won't actually begin until the threat of community spread COVID-19 disease decreases.

Then there is the West Ada School District, which is currently split between the two; they can practice, but games are currently on hold.

Central District Health (CDH) revealed their recommendations to each school district earlier this month and highlighted a message from Governor Brad Little's Idaho Rebounds Plans: "Until we have targeted, case-based interventions for each infectious person, an effective vaccine, or effective treatment, we must maintain some level of community interventions to slow the spread of COVID-19.”

While CDH acknowledges the importance of youth sports, they also said believe there is a risk that comes with an attempt to practice and play.

"By their nature, youth sports bring together children and adults from different neighborhoods and communities," CDH wrote in their return to play guidelines. "This can lead to increased risk of COVID-19 spread and introduction or reintroduction of the virus into new areas."

RELATED: 'If we want to play sports, we need to take every step we can to make that happen': West Ada prepares to return to play

Ada County is currently in Phase 3 of its re-opening plan. CDH has determined that the threat of community spread COVID-19 disease is still high, placing it in the red category.

Given those designations, that means that team practices are advisable but games are prohibited, according to CDH.

After talking with various coaches and activities directors in Ada County, sports director Jay Tust spoke with Brandon Atkins of Central District Health to discuss some of the larger questions that currently loom over athletic programs.

WHY ARE SCRIMMAGES APPROVED BUT NOT ACTUAL GAMES: CLARIFICATION IS ON THE WAY

This specific guideline has been interpreted differently, and some administrators suggest it requires a more specific recommendation. Atkins acknowledges that the spirit of the guideline was to provide a path for inter-squad scrimmages only and limit the risk of potentially transmitting the COVID-19 disease between programs.

"I think that a lot of people have interpreted that to think that they could bring in a bunch of other sports teams and scrimmage several other teams," Atkins said. "That really doesn't meet the criteria that we're looking at reducing the risk of transmission in individuals. I know that they haven't made some clarification on that, but I would look to that coming soon because it really was the heart of keeping people who are practicing together, have the ability to scrimmage together, but not necessarily playing a full-on game against an opponent."

WHY IS IT IMPORTANT TO WAIT UNTIL COMMUNITY SPREAD LEVELS DROPS TO YELLOW: "LESS TRANSMISSION RISK."

This appears to be a significant factor before both the Boise and West Ada school districts can proceed forward. The Boise School District is limiting athletic participation to groups of 10 or less at the moment, and they won't allow team practices until Ada County moves into yellow.

Factoring in required practice times, that means that teams in the Boise School District won't be able to play games until two weeks after that designation is announced.

As for West Ada, most of their teams have either fulfilled their practice requirement or are close to do so. That means their programs could begin competition as soon as CDH approves a move from red to yellow, pending the approval of the West Ada school board next week.

"The difference between those is the number of cases that we're seeing and what those cases are indicative of is the rate of transmission in the number of cases that we see within our communities," Atkins said. "Red obviously has a very high widespread community spread of disease. We're seeing a downward trend in our cases and we're very hopeful that at some point in the very near future, with continued guidance and adherence to the to this recommendations, we're going to be able to get to yellow and what we will see with that, and the criteria that we're looking at to make that recommendation would be fewer cases, a smaller amount of burden within our community, and less transmission risk because there are fewer cases that are happening within the community."

HOW CLOSE ARE WE TO YELLOW: "A COUPLE OF WEEKS."

CDH continues to evaluate the data and monitor trends, and each Monday they provide an update to determine the current level of community spread disease in the local area. On that note, as this time, there is no specific metric that determines whether Ada County - or even specific school districts - will transition from the red to yellow categories. While CDH is working toward developing that metric, right now they evaluate recent data and make a decision.

"I know everybody would like for us to have a finite answer and the truth is, we're trending downward," said Atkins. "We're hopeful that that trend and the statistics that we're seeing coming in are going to stay true to form and that we'll continue to see that over the next couple of weeks. If they do stay on that trajectory, we do anticipate that we could make that recommendation in as soon as a couple of weeks."

Atkins reiterated that in order to maintain the recent trends, people in the community must continue to follow CDH recommendations when it comes to mitigating the transmission of COVID-19.

RELATED: Some Treasure Valley high school teams back on the practice field for the first time since March

"We're gonna have to continue to do what we've been doing and continue to reduce risk to stay at that measure," he added.

IS COMPETITION OF ANY KIND ADVISABLE IN RED: "NO."

While practice plans have been approved for local high school teams, Atkins doesn't believe that competition, in any sport, is advisable in Ada County at the moment.

"I know that teams are doing a lot to be able to practice their sports and they're separating [athletes] so that they're not all playing together, which can be done," said Atkins. "To have those people in an isolated context where they're practicing together in a known group versus introducing a bunch of different groups into the area until we have less transmission risk within our area, I don't see that as a viable option."

HOW ARE LOCAL SCHOOLS HANDLING COVID-19 PROTOCOLS: “THEY ARE TRYING TO DO THE BEST THAT THEY CAN.”

These are the recommendations CDH revised on August 10:

Each school district says they are following protocols, and Atkins recognized those efforts.

“I do think that they are trying to do the best that they can, and we have to help them do that,” he said.

The flow of information and constant communication between the schools and CDH is something that helps identify the best practices during a pandemic.

“I would say that our school districts are really trying to work with the health department to make best practices applicable within their sports and within every aspect of the school, not just their sporting events. They want to make the environment for their students and for those participating as safe as possible,” said Atkins. “As you mentioned, it's a learning curve for all of us, we don't know the best-case scenario. We look at other models that are happening and we try to take those best practices and implement them. But we're our own unique jurisdiction. We have our own unique elements that we have to take into account. And I think that our school boards are really trying to do that, they really do have the teachers and students at their heart.”