Some on social media may have given up on them 15 minutes into the game, but the guys in the white unis never gave up on themselves. 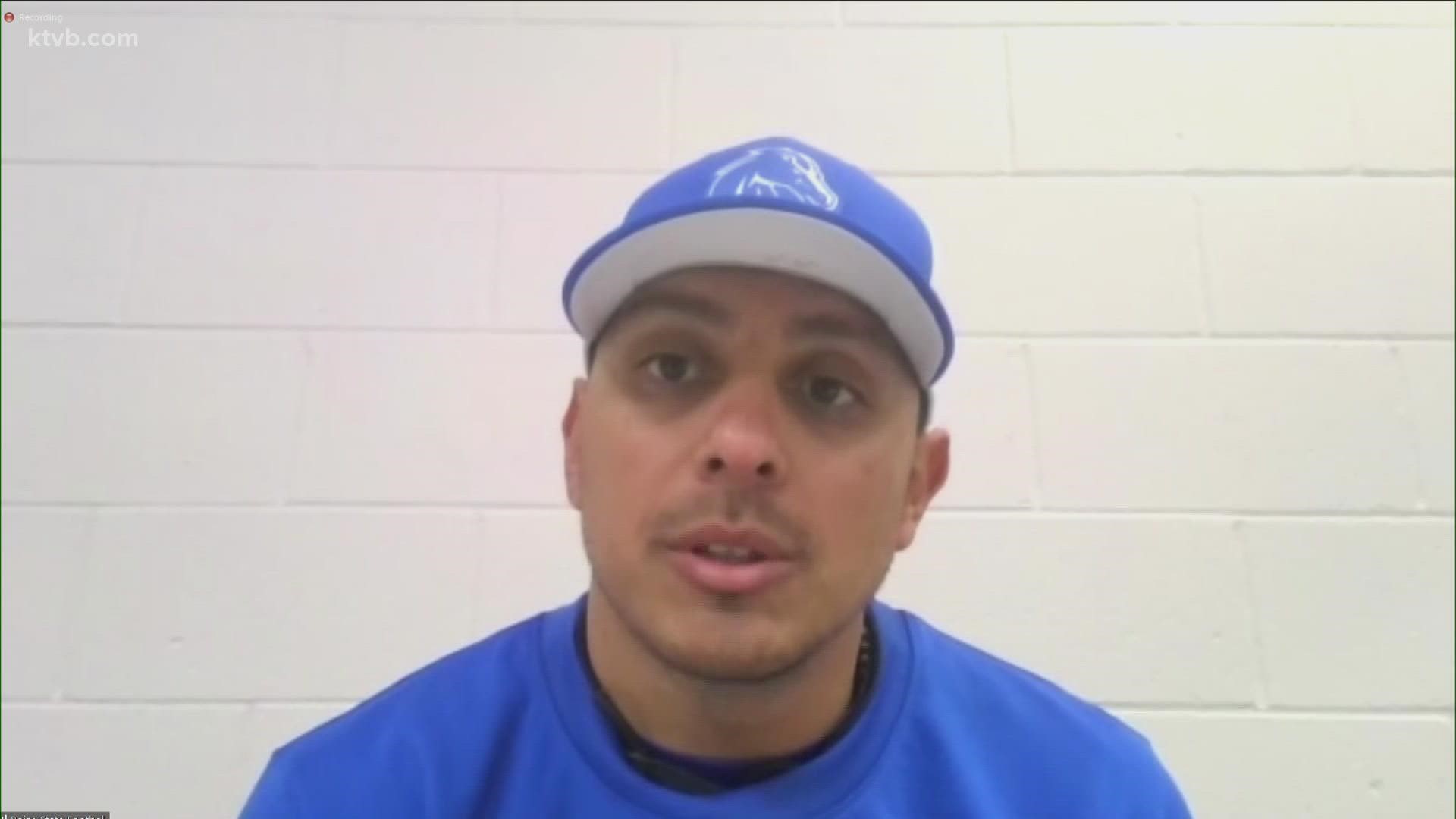 Boise State’s first quarter at Colorado State looked a lot like the one at BYU three weeks earlier. And the script flipped this time, too. The Rams dominated and got out to a 13-0 lead. The Broncos didn’t get their initial first down until 15 seconds remained in the first period and were outgained by 150 yards. All-universe CSU tight end Trey McBride had six catches for 75 yards, and quarterback Todd Centeio scrambled four times for 49 yards. You saw the reaction on social media—things to the effect of the Broncos learning nothing during their bye week, the team mailing it in, and fire Tim Plough, of course. Then came the second, third and fourth quarters, and a team that kept the faith with an incredible defensive red zone performance and an offense that peeled off two 97-yard touchdown drives, and you had a 28-19 Boise State win.

The Broncos' numbers over the first 15 minutes were just not good, but they took off the rest of the night. Rushing went from 18 yards in the first quarter to 159 over the final three. The 177 yards rushing for the game were easily a season high. Hank Bachmeier's passing went from 15 yards to 238, and total offense from 33 yards to 397. and you've gotta like those third downs...0-for-2 in the first period and 9-for-15 thereafter. Colorado State’s en fuego first quarter produced 183 yards—the Rams were on pace for a 700-yard night. But CSU netted only 33 rushing yards the rest of the way. Third-down conversions were tell-tale: after going 4-for-6 in the first quarter, Colorado State was 1-for-9 after that.

BENDING BUT NOT BREAKING

It behooves us to delve into the red zone thing here. It was the difference in the game. Three times in the first half the Rams got inside the Broncos’ five-yard line, and each time they had to settle for a field goal. At the end of the third quarter, when CSU had a chance to retake the lead, another drive stalled at the Boise State 10, another field goal ensued, and the Rams still trailed 21-19. All the while, the Broncos were scoring touchdowns. They tacked on another one with 9½ minutes left in the game on a 51-yard pass from Bachmeier to Tyneil Hopper (the longest catch by a Boise State tight end since an 80-yarder by Jeb Putzier in 2001). It was the first time this season that kicker Jonah Dalmas did not attempt a field goal.

The CBS Sports Network crew named Bachmeier as its player of the game Saturday night. And why not? Bachmeier is the second-most pounded-upon quarterback in the country, according to the CBS graphic, and there he was throwing for 253 yards and three touchdowns with no interceptions while constantly picking himself up off the carpet. But let’s call it a tie between Bachmeier and Khalil Shakir. There was a lot put on Shakir’s shoulders at CSU, including a set of snaps at tailback. He had 18 touches for 199 all-purpose yards—nine catches for 119 yards, seven carries for 43 yards, and two punt returns for 38 yards. Shakir now has 11 consecutive games with at least 65 yards receiving, tied for the second-longest streak nationally.

There’s a new “best team in the Mountain West” this week, and it’s one that also held the crown earlier in the season. Just in time for Boise State’s visit to the San Joaquin Valley this week, Fresno State took down No. 21 San Diego State 30-20 Saturday night in Carson, and it wasn’t that close. Bulldogs quarterback Jake Haener threw for 306 yards and a touchdown and Fresno State defense grabbed three turnovers. And voila! The ‘Dogs are back in the rankings at No. 25 in the AP Poll. Fresno State is 7-2; its losses are to Oregon and Hawaii (the latter one was fluky).

Mike Beaudry returned to his quarterbacking chores at Idaho Saturday and threw for 306 yards, but his third interception of the game ended the Vandals hopes with a minute left in the game in a 38-31 loss to Northern Arizona. The Lumberjacks rolled up 470 yards a week after being shut out 44-0 by Sacramento State. The defeat ensures Idaho’s 20th losing season in the past 22 years. Meanwhile, College of Idaho edged Southern Oregon 17-15 after a two-hour lightning delay to move into a tie for first place in the Frontier Conference. The Coyotes had just 209 yards of total offense, but they set up one touchdown by recovering a muffed punt and got another on a blocked punt. The winning points came on Nick Calzaretta’s 40th career TD.

STEELIES WIN THE LIGHTNING ROUND

It was the fastest overtime goal in Idaho Steelheads history, and it earned them a split in their weekend series with the Rapid City Rush Saturday night. Forward Yauheni Aksiantsiuk tied the game 1-1 with a goal late in the second period, and Aksiantsiuk won it with a tally just seven seconds into the OT. That also ties him for the third-fastest overtime goal in ECHL history. The two-goal night marked the Belarus native’s fourth multi-point game in the Steelies’ five contests this season.

Boise State women’s soccer hosts the Mountain West Tournament beginning today at the Boas Soccer Complex, and the Broncos are fortunate to be part of it. They got in last Thursday by beating Utah State 2-1—then waiting for three other things that had to happen. And they all did. Sixth-seeded Boise State meets third-seeded San Diego State this afternoon. If the Broncos beat the Aztecs, they’ll face No. 2 Fresno State in the semifinals Thursday. The championship match—with an NCAA Tournament berth on the line—is scheduled for noon this Saturday. Also, Boise State senior Dario De Caro won the Mountain West individual men’s cross country championship Friday. De Cario ran the second-fastest 8K time in conference history.

The Kansas City Royals win the World Series for the first time in 30 years after rallying for a 12-inning 7-2 Game 5 victory over the New York Mets. The Royals trailed at one point in each of their four victories, becoming the first team since the L.A. Angels in 2002 to come from behind in all four World Series wins. In fact, Kansas City overcame a deficit eight times in its 11 postseason triumphs that year. It was the first Fall Classic ever to match two teams that were originally expansion franchises. The Mets had been seeking their first title in 29 years.