Nobody knows how much better Boise State can be (and needs to be) than those in the locker room. But everybody has an opinion. 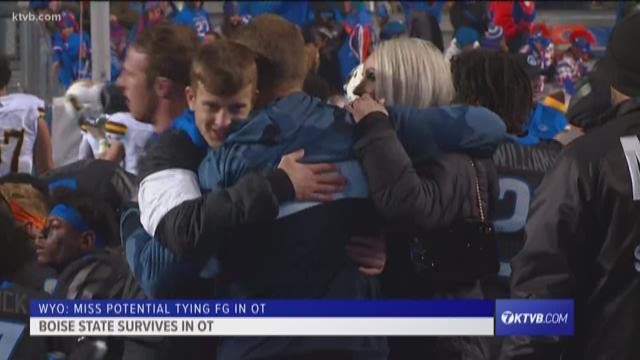 Boise State coach Bryan Harsin probably should have left well enough alone Monday.  But since he didn’t, addressing the griping on Twitter and coining the now-viral term “Twittiots,” here we go.  I think the best perspective comes from former Broncos, especially those from a 50-3 stretch that will never be repeated anywhere in the Group of 5.  This from Hunter White, who played for a certain Chris Petersen and is no Twittiot:  “I would never wish ill on my Broncos but sometimes I wish you ‘fans’ would experience a 6-6 season.  So you can calm TF down.  Harsin is 60-16, I’m sorry Pete ruined it by going 92-12 w/ 4x the NFL players.  Winningest program of this century and we at 8-1!  You guys are exhausting!”  At this point of White’s senior year in 2011, Boise State was 8-1.

AT LEAST FOUR STARTERS UP IN THE AIR

Harsin opened his Monday press conference with this: “No updates for you injury-wise.  That may change by the end of the week.  No season-ending injuries.”  That means quarterback Hank Bachmeier’s status for this Saturday’s game against New Mexico is to be determined.  And the status of running back Robert Mahone and defensive end Chase Hatada, for that matter.  But there’s another player who was added to the list in the Wyoming game.  Safety DeAndre Pierce was injured at the end of the third quarter and crawled off the field.  That’s a big one.  The past two seasons have been an ordeal for the junior from Long Beach, CA.  Pierce missed the last two-plus months of last season with a lacerated spleen—then a leg injury in the opener at Florida State this year saw Pierce miss the next four games.

Bruce Feldman of The Athletic takes a look at Arkansas’s options for a new coach after the axing of Chad Morris.  After the Razorbacks were pummeled in Fayetteville 45-19 by Western Kentucky on Saturday, they fired Morris, who was 4-18 in his second season and 0-14 in the SEC.  Feldman brings up this name:  “Boise State’s Bryan Harsin has some experience in the state from his one season coaching Arkansas State.  He also spent two seasons on Mack Brown’s staff at Texas.  Harsin is considerably more established than Morris was and has a sterling 60-16 record.  He’s been pretty selective about what he’d consider.  Would he want in at Arkansas and the SEC West?  We’ll see.”  Probably not, with the shape that program’s in.

Interestingly enough, veteran college football insider Brett McMurphy of Stadium lays 3-to-1 odds that former Bronco offensive coordinator and current Appalachian State coach Eli Drinkwitz gets the job.  He went to school at Arkansas Tech and was Harsin’s co-offensive coordinator at Arkansas State before coming to Boise State with him.  Drinkwitz is from the Gus Malzahn coaching tree, going all the way back to the high school ranks in Arkansas.  Oh by the way, his App State Mountaineers won 20-15 at South Carolina on Saturday.

The Mountain West’s four games over the weekend were decided by a total of 11 points, and the West Division race was affected in a big way.  San Diego State’s shocking 17-13 loss to Nevada meant that Fresno State was able to afford its 37-35 last-second defeat at the hands of Utah State.  And Hawaii stayed in the race with a 42-40 victory over San Jose State.  The West Division champion this year will have two conference losses.  At least.  The Aztecs are the only team left with just two.  “Misery enjoys company, I guess,” said coach Rocky Long Saturday night after finding out Fresno State also lost.  “I don’t know what that saying is.  So they are pretty miserable and we are pretty miserable and we get to play each other next week.  One of us will feel much better and one of us will feel just as bad or worse.”

THE PLAY-CALLER AND THE DEFENSIVE STOPPERS

When the Dallas Cowboys win, Kellen Moore is the kid genius offensive coordinator.  When they lose, he’s in over his head.  Mac Engel in the Fort Worth Star-Telegram writes that Moore and coach Jason Garrett “undercut their quarterback” Sunday night by not letting Dak Prescott win the game in the Cowboys’ 28-24 loss to Minnesota.  Okay.  Meanwhile, the Boise State products on the Dallas defense were highly visible, as Leighton Vander Esch went sideline-to-sideline with 13 tackles, DeMarcus Lawrence added eight with two for loss (no sacks, though), and Darian Thompson made five stops.  On the other side, Alexander Mattison had eight carries for 52 yards for the Vikings, including a 16-yarder that was originally a 17-yard touchdown before it was overturned on a video review.

After being hamstrung by a hamstring problem for a month and a half, things are looking up for Chandler Hutchison.  The former Boise State star has played in the last three Chicago Bulls games and started for the first time in Saturday’s 117-94 loss to Houston.  Hutchison scored 13 points in 23 minutes and is now averaging 9.0 points per game.  He’s also shooting just under 56 percent from the field.  “Hutch is a big wing; Hutch is what the league is,” Bulls coach Jim Boylen told the Chicago Tribune late last month.  ”You know, a 6-7 guy that can guard multiple positions, he can handle the ball, he can get out and run.  Our multiple-ballhandling system was put in with him in mind, him involved in it.”

Tonight it’s Game 1 of the home-and-home United Heritage Mayors Cup series between College of Idaho and Northwest Nazarene, hosted by NNU in Nampa.  The Coyotes are now 4-0 after winning their 33rd annual Taco Bell Shoot-Out over the weekend.  The finale Saturday night was a thriller—a 76-74 win over Montana Tech.  This is the Nighthawks’ season opener after a couple of exhibition games.  NNU routed California Miramar 98-58 last Friday, but the eye-opener was a narrow 62-56 loss at Wyoming a couple weeks ago.  By C of I’s count, this is the 207th renewal of the Battle of Canyon County, the oldest hoops rivalry in the state of Idaho, dating back to 1933.  The teams split their two matchups last year.

There’s a lot of intercollegiate competition these days between Boise State and BYU.  The next one will be a first—and it’s a big one, as the Broncos women’s soccer team has drawn the 18-0-1 Cougars Friday night in Provo in the first round of the NCAA Tournament.  BYU is ranked No. 4 and is the only unbeaten team left in the country.  And in American football, College of Idaho is No. 6 for the third straight week in the NAIA Coaches Poll.  The 9-0 Yotes also nabbed two Frontier Conference Player of the Week honors on Monday, linebacker Forrest Rivers on defense and kicker Kyle Mitchell on special teams.  There’s one game remaining in the regular season—key word “regular,” as C of I is in line to host a first-round game in the NAIA Playoffs.

The nation’s longest home winning streak ends at 35 games when TCU holds off Boise State in Bronco Stadium, 36-35.  The Broncos and Horned Frogs had become rivals through three meetings in bowl games and fought to the final play, a missed 39-yard field goal by Boise State’s Dan Goodale.  Frogs sophomore quarterback Casey Pachall stunned the Broncos with a 473-yard passing day and threw for the winning two-point conversion with 1:05 remaining.  It was the only conference game between the two schools, as TCU would depart the Mountain West for the Big 12 the following year.  The loss also ended Boise State’s 65-game regular season home streak, and its 47-game home streak in league play.