Migrants approaching the U.S. border from Mexico were enveloped with tear gas after a few tried to breach the fence separating the two countries. 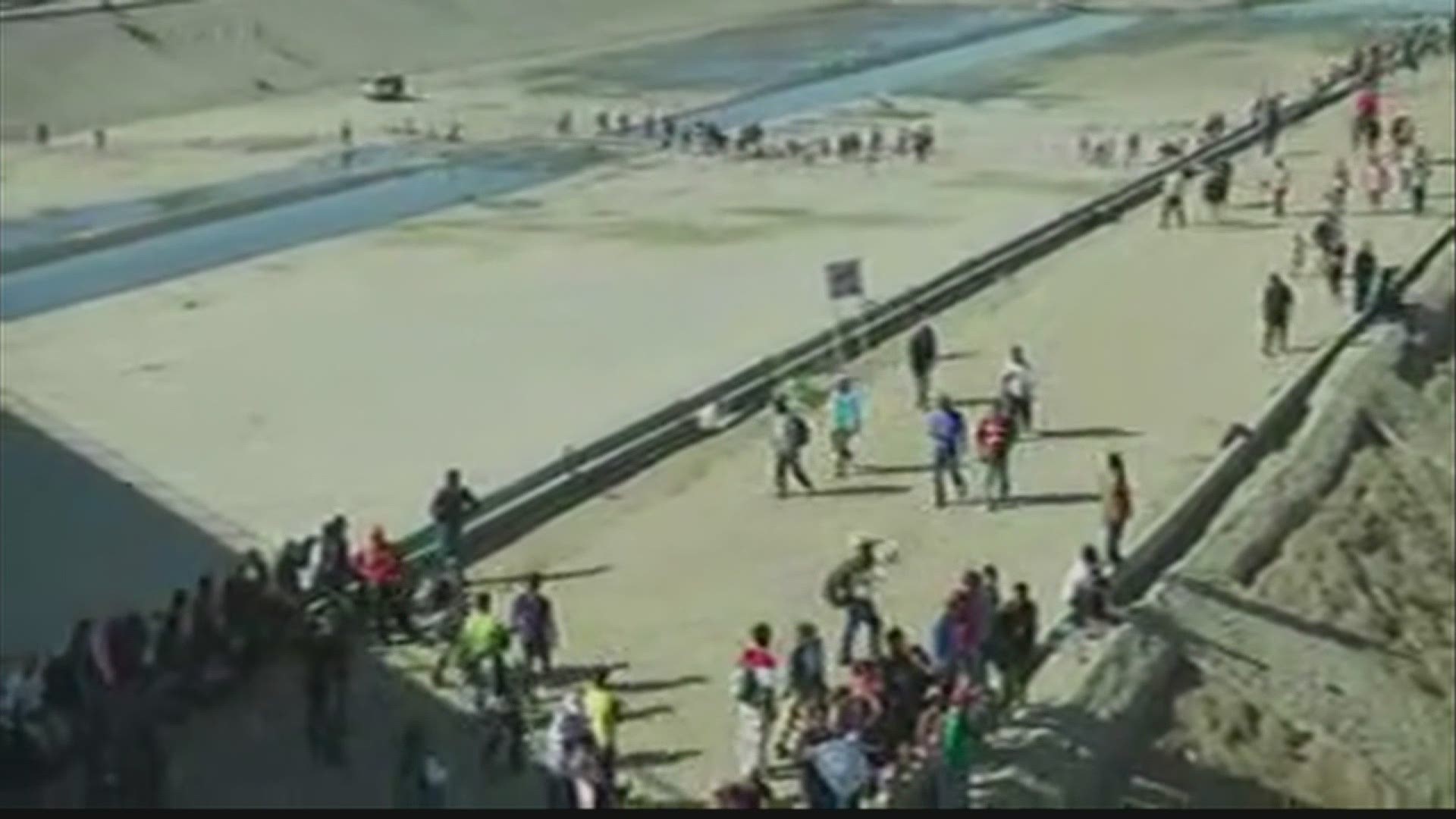 TIJUANA, Mexico — U.S. border agents fired tear gas on hundreds of migrants protesting near the border with Mexico on Sunday after some of them attempted to get through the fencing and wire separating the two countries, and American authorities shut down the nation's busiest border crossing from the city where thousands are waiting to apply for asylum.

The situation devolved after the group began a peaceful march to appeal for the U.S. to speed processing of asylum claims for Central American migrants marooned in Tijuana.

Mexican police had kept them from walking over a bridge leading to the Mexican port of entry, but the migrants pushed past officers to walk across the Tijuana River below the bridge. More police carrying plastic riot shields were on the other side, but migrants walked along the river to an area where only an earthen levee and concertina wire separated them from U.S. Border Patrol agents.

Some saw an opportunity to breach the crossing.

1 / 22
AP Photo/Ramon Espinosa
Mexican police run as they try to keep migrants from getting past the Chaparral border crossing in Tijuana, Mexico, Sunday, Nov. 25, 2018, near San Ysidro, California.

Honduran Ana Zuniga, 23, also said she saw migrants opening a small hole in concertina wire at a gap on the Mexican side of a levee, at which point U.S. agents fired tear gas at them.

Children screamed and coughed. Fumes were carried by the wind toward people who were hundreds of feet away.

"We ran, but when you run the gas asphyxiates you more," Zuniga told the AP while cradling her 3-year-old daughter Valery in her arms.

The ministry said in a statement it would immediately deport those people and would reinforce security.

As the chaos unfolded, shoppers just yards away on the U.S. side streamed in and out of an outlet mall, which eventually closed.

Throughout the day, U.S. Customs and Border Protection helicopters flew overhead, while U.S. agents held vigil on foot beyond the wire fence in California. The Border Patrol office in San Diego said via Twitter that pedestrian crossings were suspended at the San Ysidro port of entry at both the East and West facilities. All northbound and southbound traffic was halted for several hours. Every day more than 100,000 people enter the U.S. there.

Homeland Security Secretary Kirstjen Nielsen said in a statement that U.S. authorities will continue to have a "robust" presence along the Southwest border and that they will prosecute anyone who damages federal property or violates U.S. sovereignty.

"DHS will not tolerate this type of lawlessness and will not hesitate to shut down ports of entry for security and public safety reasons," she said.

.@DHSgov will not tolerate this type of lawlessness & will not hesitate to shut down POEs for security reasons. We'll seek to prosecute to the fullest extent of the law anyone who destroys federal property, endangers our frontline operators, or violates our sovereignty.

More than 5,000 migrants have been camped in and around a sports complex in Tijuana after making their way through Mexico in recent weeks via caravan. Many hope to apply for asylum in the U.S., but agents at the San Ysidro entry point are processing fewer than 100 asylum petitions a day.

Irineo Mujica, who has accompanied the migrants for weeks as part of the aid group Pueblo Sin Fronteras, said the aim of Sunday's march toward the U.S. border was to make the migrants' plight more visible to the governments of Mexico and the U.S.

"We can't have all these people here," Mujica told The Associated Press.

Tijuana Mayor Juan Manuel Gastelum on Friday declared a humanitarian crisis in his border city of 1.6 million, which he says is struggling to accommodate the crush of migrants.

U.S. President Donald Trump took to Twitter Sunday to express his displeasure with the caravans in Mexico.

"Would be very SMART if Mexico would stop the Caravans long before they get to our Southern Border, or if originating countries would not let them form (it is a way they get certain people out of their country and dump in U.S. No longer)," he wrote.

Would be very SMART if Mexico would stop the Caravans long before they get to our Southern Border, or if originating countries would not let them form (it is a way they get certain people out of their country and dump in U.S. No longer). Dems created this problem. No crossings!

Mexico's Interior Ministry said Sunday the country has sent 11,000 Central Americans back to their countries of origin since Oct. 19, when the first caravan entered the country. It said that 1,906 of those who have returned were members of the recent caravans.

Mexico is on track to send a total of around 100,000 Central Americans back home by the end of this year.