EAGLE - Students from Middleton High School are hoping to bring down the disturbingly high number of car crashes caused by distracted teen drivers. 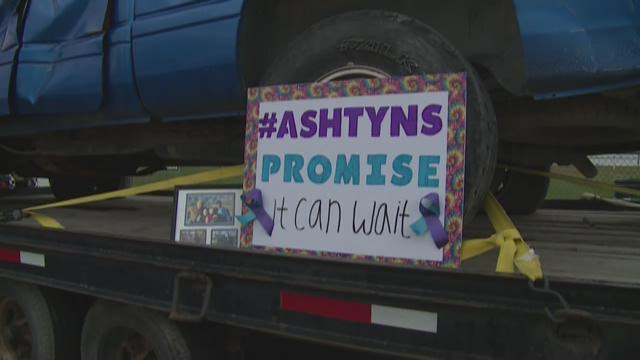 EAGLE - Students from Middleton High School are hoping to bring down the disturbingly high number of car crashes caused by distracted teen drivers.

According to a AAA report, six out of 10 teen car crashes involve some type of driver distraction, ranging from using a cell phone while driving to interacting with passengers.

On Sunday, Middleton High students were raising awareness of the problem in honor of a classmate who died in a distracted driving crash last year. They chose to spread their message to their peers at Firebird Raceway Sunday during the Spring High School Championships.

"We have a little motto it's 'Take it off the road and take it to the track,'" Madison Fetty, a student, said. "It's just a lot of high schoolers like to drive recklessly and, you know, drive fast and it's just a way to do it safe and competitively. It's just super fun."

Firebird promotes a message to teen drivers that drugs, alcohol and driving don't mix, but with the help from students at Middleton High, distracted driving was also covered at the track on Sunday.

"It is taking too many lives unnecessarily," said Randy Powell, the school's club advisor and driver's education instructor. "And the message just needs to be brought out and put out in front of everyone just like the car."

The truck their classmate, Ashtyn Scott Walsh, was driving when she got into a deadly car accident was at Firebird Sunday. Last November, friends and family said she was using a cell phone while driving, got into an accident and lost her life.

"When the accident happened and we lost Ashtyn, the entire community of Middleton was completely broken," Fetty said. "And it just really sucks to have something happen to somebody so close to you and to their family. So we just want to promote that, so that way it doesn't have to happen again."

The truck may be difficult to look at, but the students said that's what really pushes the message.

"It shows that it does happen, it's living proof," Felty said. "That you know, this is what happens and you're never too good at it and you just shouldn't do it."

"We hope the message continues and just doesn't last six months, a year," Powell said. "It's got to be a continued scenario or we'll keep seeing repetitiveness with the kids and other adults."