Downtown Boise Association Executive Director Lynn Hightower told KTVB that projects like Pioneer Crossing really speak to the success of the downtown Boise business community - and the community in general. 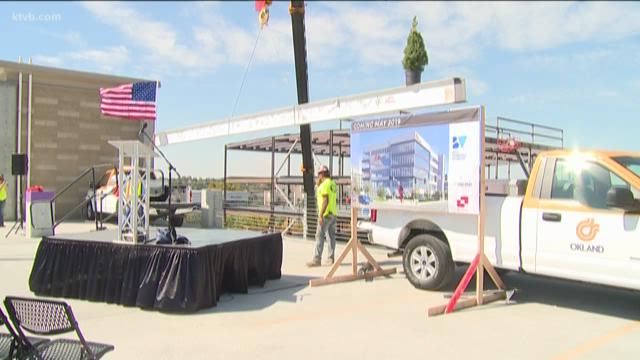 BOISE — The biggest day in the construction of any building is the day developers open the doors.

The second biggest day is the day crews place the final steel beam on the top floor.

A topping off ceremony for the new Pioneer Crossing office building was held on Wednesday in downtown Boise.

“This was an old, dirt parking lot for years, decades, sitting right here and I think to change that and have the entrance to downtown be our building, we're very proud of it.”

It will soon house an office building, which will include First Interstate Bank.

“The economy is really roaring right now and there's a lot of excitement around Boise," Ahlquist said. "We wanted to do a project that fit in with downtown,”

“Downtown Boise is in its sixth year now of what is really a noticeable building boom,” Hightower said. “The city is estimating between 2015 to 2020, between public and private investment, $1.3 billion in investment. We're standing in the middle of 40,000 jobs, that's a lot of vibrancy.”

“This economic activity that occurs in downtown Boise is a key revenue generator for local governments, the county, the city, the state, and that creates the opportunity for more investment in communities well beyond these few square blocks of downtown Boise,” Hightower said.

“I think it's just a sign of the health of our community, city and our state and what a great place it is to do business in Idaho and in Boise,” Ahlquist said.

The entire Pioneer Crossing building is expected to be completed in May 2019.