The Blessing Bike: A Boise family's idea for an adapted bicycle is now being enjoyed by others thanks to nonprofit

KTVB featured 92-year-old Rosemary Sorce's daughter and son-in-law who built a special bike so she could get out and ride with them again during a 7's Hero. The story quickly went viral, and now the family has started a nonprofit to build bikes for other families. 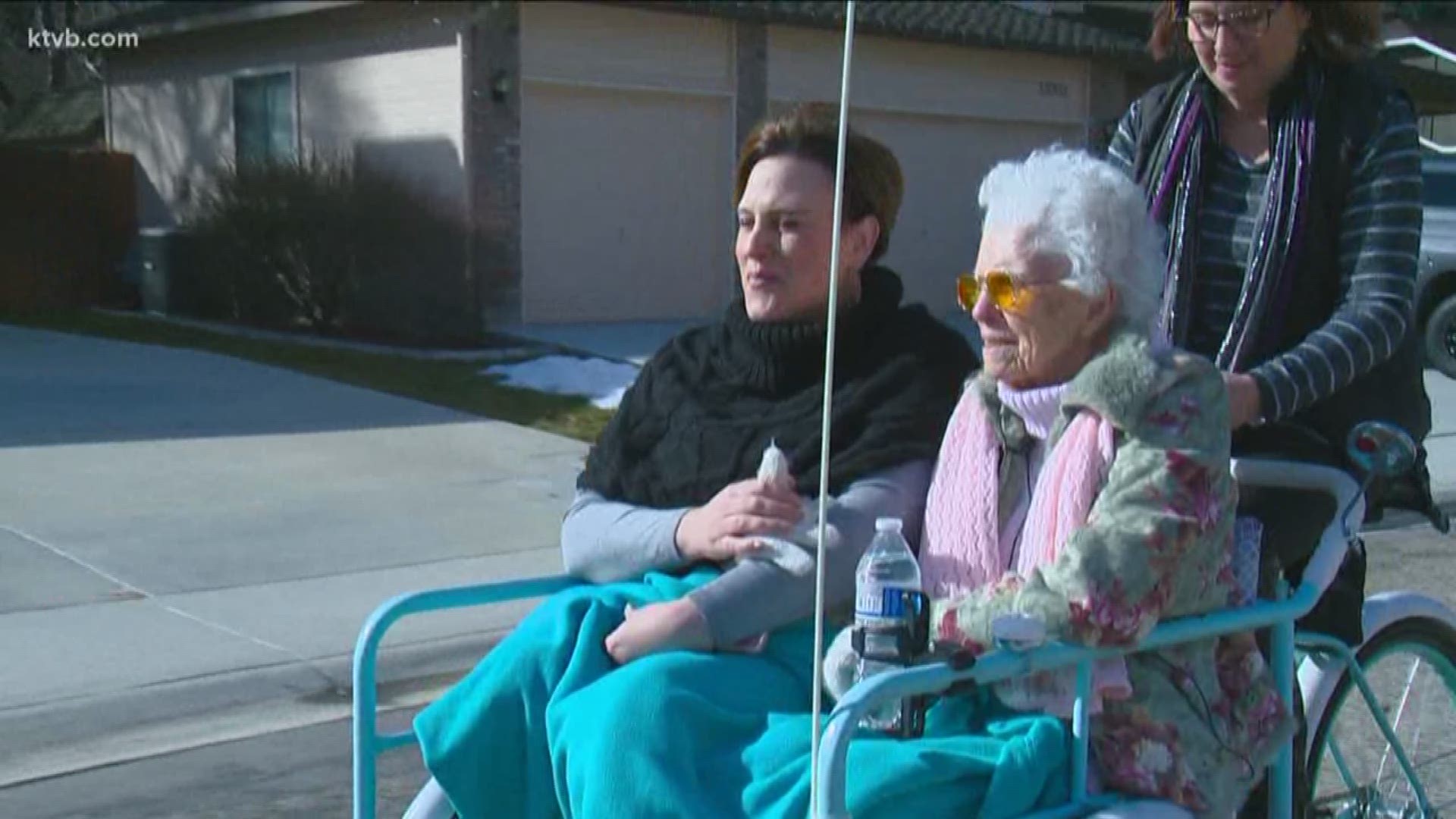 BOISE, Idaho — In November of 2018, we brought you the story of 92-year-old Rosemary Sorce and her bike. The story went viral on social media, raising awareness for the blessing bike.

Rosemary’s family built a specially adapted bike just for her, so she could get out and ride with them again. She sits in the front on a bench, and her daughter does the pedaling. They go on a bike ride every day, rain, snow or shine.

“I love it I love it, all I do is sit and smile and people say there goes that crazy lady again! I like the freedom to be able to go outside. It makes me feel young again,” Rosemary said.

Rosemary’s daughter Jill Houser saw a bike like this on Facebook and asked her husband Wade if he could build one. Wade Houser found an old cargo bike on Craig’sList and fixed it up just for his mother-in-law. They surprised her with it on her birthday.

It has only been four months since our original story aired on KTVB, and now major plans are in the works for what is lovingly called The Blessing Bike.

“Since the story aired, it went across the Pacific Northwest, across the nation. We've had people contact us from all over the world - Australia, Japan, England, Germany, inquiring about the bike. Families wanting to help their loved ones, people with disabilities, elderly people," Jill said.

Rosemary's story is inspiring people all over the world. People want to know how they can get their hands on a bike just like this one.

“We got together as a family and decided we can help more people, so we formed a non-profit called 'The Blessing Bike,'" Jill said.

They partnered with a bike mechanic in Boise and started ordering and modifying cargo bikes in their garage.

“He gets these bikes for us, they come in a box that's this big all folded up, takes us a few hours to assemble the bikes," she said. "We put in a floor, a diamond plate floor. We then make some benches.”

People can now buy The Blessing Bike for $1,600, which is the cost for Jill and Wade Houser to order and customize one. They don’t make a profit for selling the bikes.

Right now, they are financing all the bikes themselves. It’s a labor of love for the couple.

They say they are just trying to keep up with the demand. The orders for The Blessing Bike are rolling in from families with elderly relatives, children, adults with disabilities, and from local senior living communities.

Jill says the bike deliveries are the best part of it all. She shares those moments on their official Facebook page.

“I cry every time and I remember the name of every single person who purchases this bike and their stories," she said.

Jill says she had no idea this idea would blow up the way it has. She says this non-profit is her mother Rosemary's legacy.

“On one of our rides, we had a conversation, just about her life. She said, 'I never really did anything, I didn't have a career. In my generation, we got married and had kids and that was our life.' She said, 'I really feel like I'm living my purpose,'" Jill said.

Rosemary says it makes her happy to know her bike is bringing others so much joy. It’s also having a big impact on her health since she started riding, her doctor says she’s thriving.