Local restaurant employees, customers give back to charity

The Griddle, with four locations across the Treasure Valley, is doing more than just serving up tasty breakfast fare. 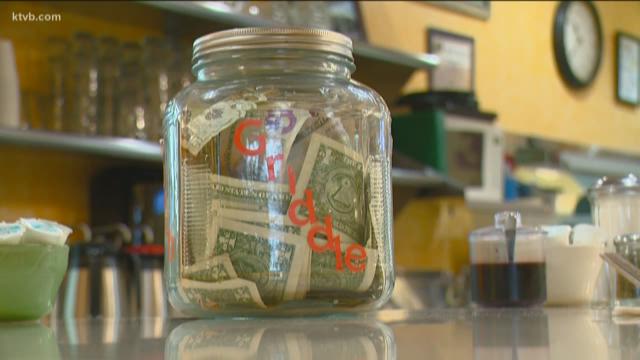 BOISE - A popular local restaurant is giving back to the community in a big way. The owners and employees are behind it all, and the customers seem to love it.

The big winner in all of this is the charities that benefit.

The Griddle, with four locations across the Treasure Valley, is doing more than just serving up tasty breakfast fare.

"Every month we pick a charity, and we try to raise money for it," explained Danika Aboud, an employee at the Meridian location. "This month it's children's diabetes, it's JDRF.

"Servers donate money on Tuesdays and Sundays to raise awareness for it," Aboud added. "We have our table tents on the table that tells them a little bit about it."

Customers at the Griddle are encouraged to leave money that will be donated to various local charities.

The Griddle's customers are excited to be a part of it.

"They love it," Aboud said. "A lot of guests will come back time after time to see what the new charity is."

The giving campaign began about four years ago.

"One of our owners has MS, so it started out with her trying to raise money for MS and she had such an amazing response to it that the staff really got involved and loved it so we decided to expand other charities as well," Aboud said.

Over the years, the Griddle tells us, its community outreach program has donated over $150,000 to charity, and that includes some of the company's monthly profits.

"We do the children's NF foundation, and that's our super hero charity that we love to do," Aboud said. "Right now we're doing diabetes, we did epilepsy, human trafficking, fuzzy paws animal rescue."

Customers we spoke to say they are impressed by the selfless nature of the entire Griddle staff.

"I think it's amazing that the staff is getting involved in it," Israel Carlos said. "It might be just an Idaho thing. I think everyone here is worried about community and wanting to pitch in."

For more information on what charity is next up on The Griddle's list, check out their Facebook page.