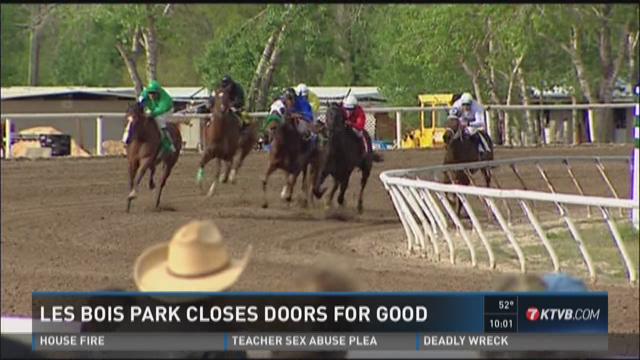 GARDEN CITY - After over 40 years of entertaining fans and creating jobs for horsemen and women, Les Bois Park closed its doors on Sunday.

The closure is the result of a long battle between the Idaho Legislature and the owners of the racing lease. The company that runs Les Bois says it can't afford to stay open without instant racing machines. The Legislature decided not to hear the appeal from horsemen who were asking lawmakers to take a closer look at their decision that the machines were unconstitutional.

Treasure Valley Racing is not giving any interviews about closing Les Bois, but those close to the industry tell us it's devastating not only for them, but the entire state. Myron Amsden is on the Idaho Horse Council and says now that racing is done at Les Bois it has a trickle down affect for the smaller tracks, because it was the purse generator for them.

"They relied on the funding from Les Bois to help their tracks," said Amsden.

The horse racing industry supports many other industries as well, Amsden said, and it's not just them suffering from the loss of this closure.

"It's the feed, the hotels, the traveling, eating... it's just a trickle down affect," he said. "Horses are going to be shipped out of state and that's income Idaho doesn't get. That's devastating for our horse economy."

Amsden also feels sorry for the kids who will not have the chance to grow up watching live horse racing and may have decided to get involved in the industry.

"We'll never have another Gary Stevens, a Hall of Fame jockey from right here in Boise," said Amsden. "The dreams of the youth, that's gone, it's never coming back."

Les Bois Park is owned by Ada County and has been leasing it to Treasure Valley Racing. No word on what's in store for the park now.

A recent Boise State University study showed the economic impact of Les Bois Park is about 50 million dollars a year and 536 jobs. Here is a breakdown of what the BSU Economics Department found at 2015 operating levels: