The current law says the threat must be made on school grounds. If it's made on social media, in most cases, nothing can be done. Lawmakers said this law is outdated. 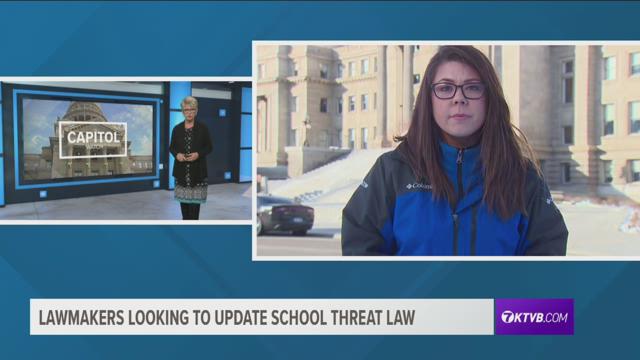 BOISE- Idaho lawmakers are cracking down on people making threats to schools.

The current law says the threat must be made on school grounds. If it's made on social media, in most cases, nothing can be done. Lawmakers said this law is outdated.

"We've got to do something,” said Rep. Patrick McDonald, R-Boise. “We've gone too many years and lost too many kids to this type of activity."

"With the recent situation in Florida it’s more important than ever to make sure that our statutes account for the modern threats that our schools are facing, " said Rep. Wendy Horman, R-Idaho Falls.

The current law hasn't been updated since 2006. It's limited to threats made on school grounds - it does not include electronics or social media. Lawmakers are reworking the law to include all electronic threats and threats even when they’re not directed at students, but at school property.

“We need to give law enforcement the tool that they need to protect the kids and protect the schools," said Rep. John Gannon, D-Boise.

“During testimony in committee we heard, I think it was from the Nampa Police Department, that said they had had a couple of incidents where there was a threat made, but they were unable to charge them with anything again because it was an electronic means," Horman said.

The request to update the law came from the Fraternal Order of Police.

House Bill 588 would also include a felony clause. If a person has a deadly weapon that is intended to be used to carry out a threat that can be charged with a felony.

“We're serious about this. It's an act of terrorism,” McDonald said. “It’s serious and so we want to get a head of the curve on this.”

Lawmakers on both sides of the aisle said this bill is one step in the right direction.

“It would be irresponsible not to. I mean we have to. We can't allow this to keep going,” Gannon said.