Dozens of road projects cause headaches for commuters in downtown Boise

The lane closures on Idaho Street are only making rush hour traffic worse in downtown Boise. 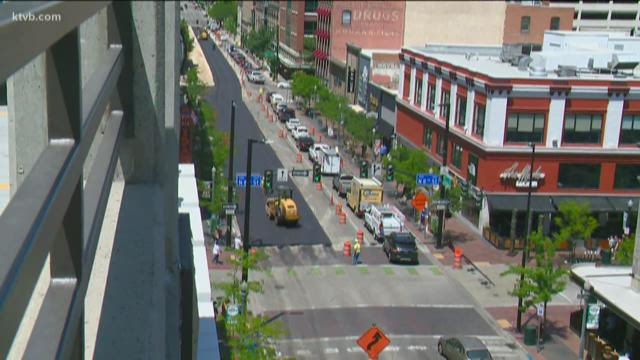 BOISE, Idaho — Boise is constantly growing in population but as the city grows in people, it also grows in traffic, pushing more crews out to preserve and fix the roads.

That includes laying asphalt in early summer when the temperatures are just right. Ada County Highway District started laying asphalt on Idaho Street in downtown Boise on Monday morning, leaving only one lane of traffic between the 8th and 11th street intersections. Drivers weren't too thrilled with the slow flow of traffic.

"It's super fun to go through," one driver sarcastically said.

"With the trailer, everything's really tight," another driver said while slowly hauling gear down Idaho Street.

It's not just affecting drivers, though. Pedestrians and cyclists had to deal with the noise and dust clouds the steamrollers created as they flattened wet asphalt.

If it seems like a lot is happening downtown in respect to construction, you're not wrong. ACHD has named their long list of summer roadwork the "Downtown Boise Maintenance Project."

Idaho Street is only one out of dozens of projects slated for the summer in downtown Boise alone.

"What we're doing is we're repaving [Idaho Street] and then in certain areas, depending on what's needed, upgrades are being made to pedestrian facilities," Natalie Shaver, a spokesperson for ACHD, said.

ACHD isn't trying to ruin everyone's summer fun with all the noise and commotion - blame the weather instead.

"We know it's tough," Shaver said. "We get that and we want to work with the public to make it as best as we possibly can and to just hang on through it. It will be worth it later on."