For teens, vaping epidemic is 'a huge issue', researcher says

Unlike cigarettes, the link to cancer of which is widely known, vaping products are new enough that long-term data on their health effects do not yet exist. 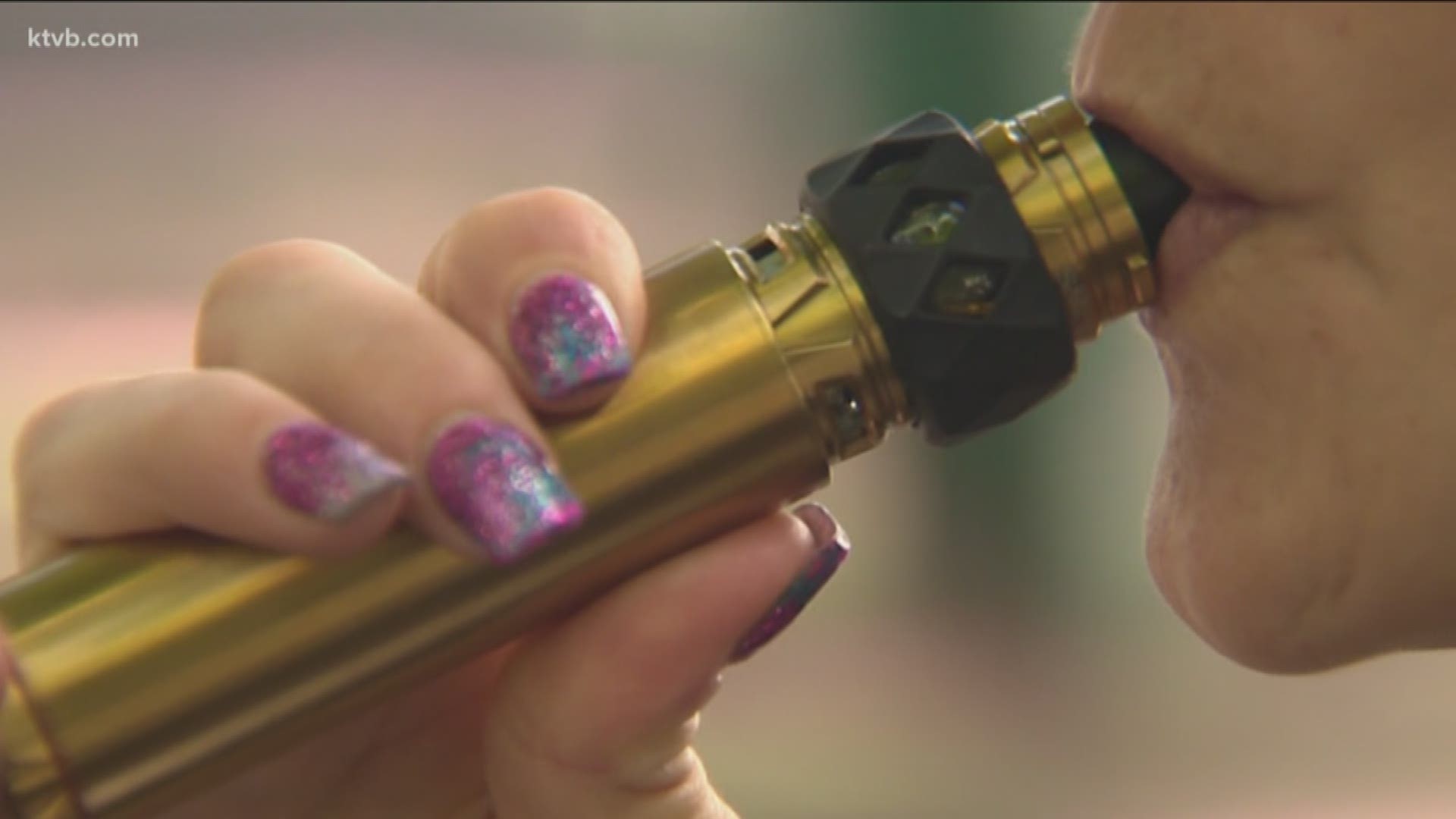 BOISE, Idaho — Editors note: This is Part Two of a three-part series looking at the many sides of vaping. For Part One, click here. Tune in at the News at Ten Tuesday for the final installment in the series, also available at KTVB.COM and the KTVB app.

As the deaths and hospitalizations linked to a vaping continued to tick up across the country, worried parents gathered in a conference room at Boise State. Some had brought their children - teenagers and even younger - along to listen. Others wielded notebooks to jot down information about the mysterious illness that everyone has heard about, but no one can seem to explain.

Not the Center for Disease Control, which says that although many of those sickened were using products with THC,  doctors have been unable to pinpoint a single substance or product that is connected to the outbreak.

Not e-cigarette companies, many of which claim their products are safer than traditional smoking.

Not even Dr. Bonnie Halpern-Felsher, a youth vaping research expert, Stanford University professor of pediatrics, and the woman they had all come here to see.

"We don't know if it's your traditional e-cigarettes, or JUUL, or other pods on the market, or if its black market," Halpern-Felsher said. "We don't even know if its vaping nicotine or THC, it's really unclear. The only thing we really do know is that the underlying cause is vaping."

That's a problem, she says, and particularly troubling when it comes to young people. Although nationwide data confirms that a quarter of teens report using vape products, Halpern-Felsher said that number is likely much higher: As much as 50 or 75 percent, according to educators who have spoken with her about the prevalence of vaping in their own schools.

"I think now it has just become so pervasive that it's hard for young people to say no," she said. 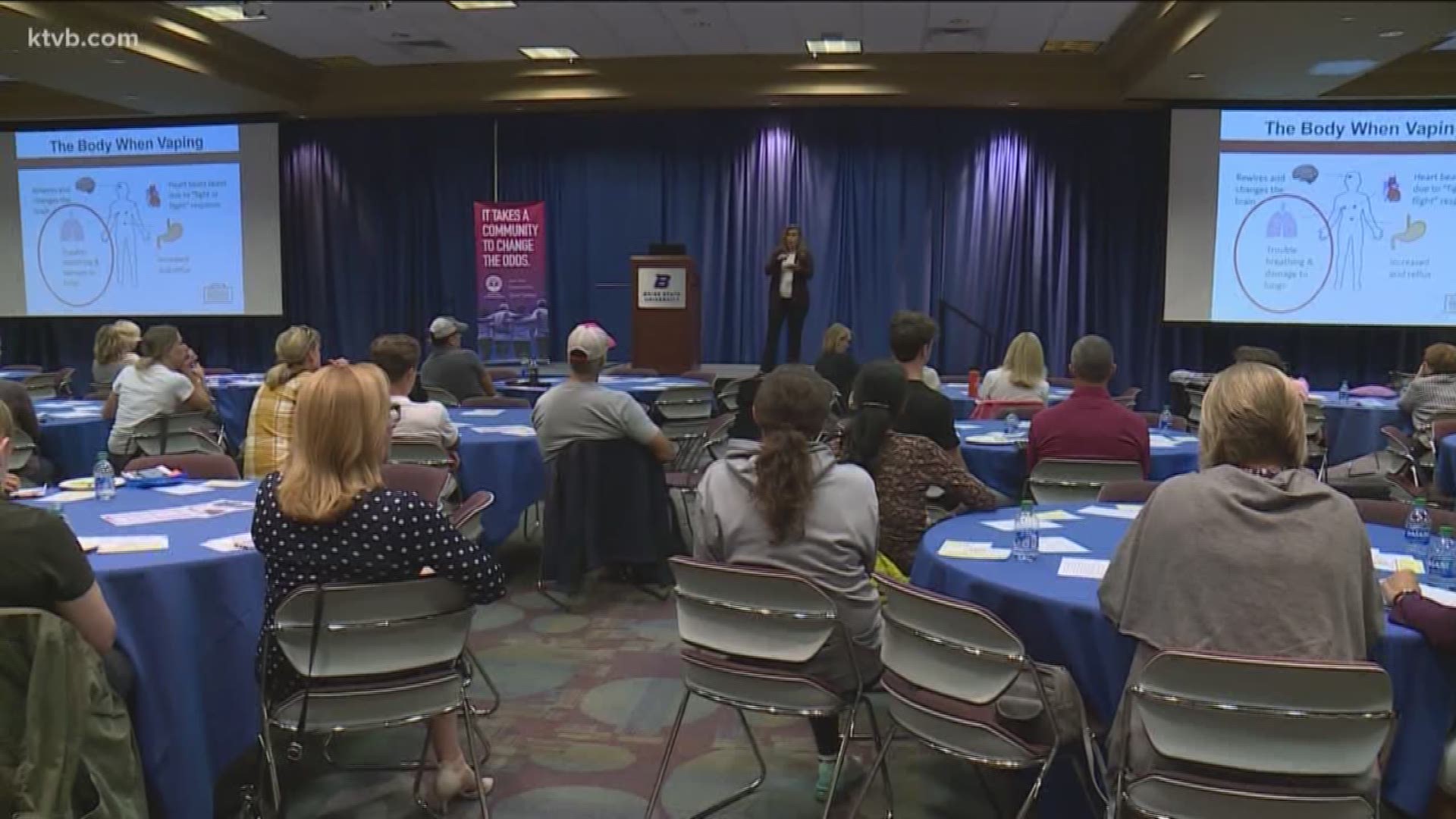 Brady Jones, whose preteen daughter attends a local school, said that older students even vape on the school bus while the driver steps out to change route numbers.

"She's too young to be having that kind of pressure," he said.

RELATED: 'We need to make sure he doesn't get caught up in it': Parents gather at Boise State to learn more about health effects from vaping

Jenn Halliday's kids go to Mountain View High School in Meridian. She said her son has told her about his friends vaping as well.

Unlike cigarettes, the link to cancer of which is widely known, vaping products are new enough that long-term data on their health effects do not yet exist. Although some who use vaping products - including E-Juice Boulevard co-owner Jeremy Forsee - say that vaping has helped them quit smoking and reduce their nicotine intake by steps, Halpern-Felsher says that's not a good comparison when it comes to kids, who are much more likely to pick up vaping without having ever smoked before.

Even those who use e-juice with no or very low nicotine levels are at risk, she said. E-cigarette aerosols also contain chemical flavorings and either propylene glycol or glycerin, ingredients that meet FDA standard of "generally recognized as safe" or GRAS. But that standard is meant for substances that are ingested in food, not inhalation. The health effects of inhaling those flavorings and other ingredients is unknown, according to Halpern-Felsher.

Idaho has not instituted any vaping bans, but other states including Washington, Michigan, New York, Massachusetts and Rhode Island, have rolled out temporary vaping bans. The majority of those regulations are aimed at e-liquid, which comes in flavors like cinnamon cereal, grape soda, and cotton candy that researchers say unfairly target young people.

President Donald Trump is also considering a federal-level ban on flavored e-juice products, although no nationwide restrictions have gone into effect.

But Halpern-Felsher says that's not enough.

"The first thing I would say is, to be blunt, the FDA needs to do its job," she said.

The Food and Drug Administration has the power to immediately pull all vaping products from the market until companies meet what is known as a premarket approval - a process of scientific review that determines whether a product is safe. To her knowledge, Halpern-Felsher said, not vaping device or e-liquid company has completed that review.

She also supports raising the age to purchase vaping and nicotine products to 21, banning all flavors, and increasing regulations on the state and local levels.

Forsee and others in the vaping industry say that banning their products across the board would be a mistake. But they agree that more needs to be done to keep children away from vaping.

"If you don't smoke or don't vape, we don't recommend you start," he said.

Ultimately, Halpern-Felsher said, the best thing parents can do get informed and start a conversation with their kids about vaping. She knows not everyone will be convinced to drop vaping or back more intensive regulation, but argues that it is critical to address the problem head-on.

"I get a lot of people saying, 'well isn't caffeine a danger' or 'what about flavored alcohol?' or other things. Well, first of all, yeah, those are harmful for young people as well, and we're not refuting that," she said. "We're not talking about one versus the other. But we're saying right now we have a huge issue across the country with young people and adults using these vaping devices and becoming sick."

Tune in to the News at Ten Tuesday night for Part Three of our series, about proposed legislation addressing vaping in Idaho, and how it could change the industry.