The center took over the building next door to house more services and help more victims. FACES, Ada County and the center's partners threw a block party and gave tours Wednesday evening celebrating the opening. 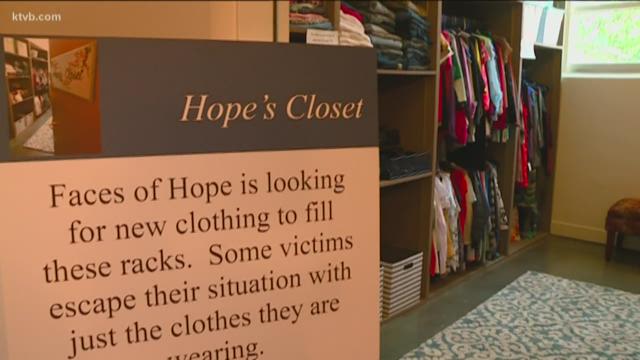 BOISE — As domestic violence becomes a growing problem in our growing population, FACES of Hope Victim Center is expanding their footprint and services.

The center took over the building next door to house more services and help more victims. FACES, Ada County and the center's partners threw a block party and gave tours Wednesday evening celebrating the opening.

They're calling it a "friendraiser" and opening up to the community as they cast an even wider safety net.

“Lots of partners in one building and that's the whole goal: we want to reduce trauma. And we know if we are having the victim tell their story over and over and over, they're being re-traumatized. But they can go under one roof and tell their story one time,” Dinger said as she guided a KTVB crew around the facility.

Now, FACES offers six to eight weeks of free crisis counseling for victims with one and a half full-time counselors.

"That's really an important, critical time for them because as they've made the decision to leave, a) it's the most lethal time for them so they need to feel that they're safe and made the right decision, and that they've got some support around them to work through these kind of big, heady decisions involving themselves and their family and what they should do," Fisher told KTVB.

“There is no waitlist for us, we have emergency spots open every single day,” Dinger added.

FACES is also housing their legal clinic in the new building, which they've been working for three years to land with the University of Idaho College of Law. There is a full-time legal clinician who will work with four third-year law students come fall semester.

“What we additionally get to do now is encourage folks to know there’s one place they can still come back to, see the same counselor initially, that they're going to get introduced to a lawyer or someone that can help them with those services."

"They are going to trust us a little bit more, trust the system, they're going to trust themselves that they've made the right decision. And so ultimately by providing these services we're able to help with accountability because we're keeping victims invested in their own future. By doing that it's a win-win for everybody," Fisher added.

FACES gave tours of their expansion and applauded the FACES Foundation board members who raised the money to help turn the dream into a reality.

There is now a large, open community room that serves a couple purposes: it provides a space for survivors to attend support classes, empowerment classes and self-defense classes; the room is also an area for staff, board members, donors and community partners to gather and hold events.

"I think this is the most exciting and most amazing room because you can't help but feel hopeful as you look at all of the artwork,” Dinger said.

Local spray paint artists Sector Seventeen created a colorful mural spanning the front wall, using it as a canvas to tell the story of hope and freedom.

"It really is just the story of a girl looking at a hopeful tomorrow. And that's what this place is all about: we want to bring people hope," Dinger added.

There's also now Hope's Closet, filled with new and used clothes and beauty products for victims who escaped their abuser with nothing but the clothes on their back.

"Some people come to just pick one item after a sexual assault exam and we've taken their clothing for DNA evidence. They come in here and get pajama pants and a t-shirt or they're going to court, or they're looking for a job," Dinger told KTVB on the tour. "We just want to empower people when they come in and make them feel hopeful and I think this really helps."

FACES is seeking more new clothes from the community to add to the room.

"So they have some dignity when they leave and feel like it's going to be OK, people have my back, I'm going to be able to do this," Fisher added.

As domestic violence, sexual assault, child abuse and elder abuse numbers rise, the demand for services swells. Fisher says 2,000 people - adults and children - came to FACES for support last year; so far this year, they have seen over 600 adults alone.

"We depend on our partners to help with that long-term care but as far as that 30-day immediate crisis and support care, this is it for Ada County," Dinger said.

"We have been flying under the radar for a long time and now that we have the community board that we do that's so supportive of our services, that raises all this money so victims can get all these free services, we want people to know we're here," Fisher added. "Our center is here, we're safe, this is a safe place to come. We'll take care of you."

Because FACES is that immediate safety net, their mission is to connect victims to other long-term supportive care services.

"We provide hotel and housing when we need to but our objective is to pass them on to the [Women's and Children's Alliance] for long-term shelter, long-term care. Maybe over to victims' comp when that kicks in so they can get long-term counseling," Fisher told KTVB. "Those things take time to kick in and during that critical time is when we're there filling the gap with that safety net."