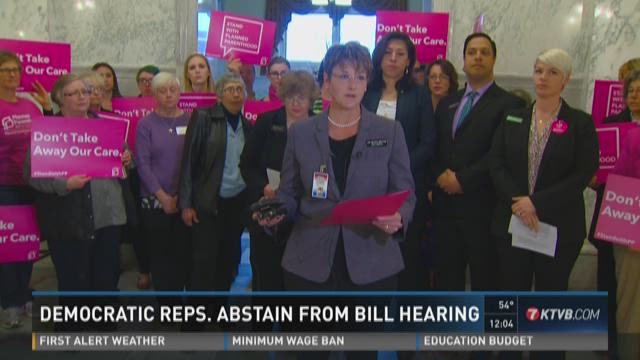 BOISE -- Democrats on the House State Affairs Committee reacted strongly to a fetal tissue bill that passed the Senate earlier this week, likening it to "campaigning on the public dime."

The four Democrats on the committee - Rep. Elaine Smith of Pocatello, Rep. Paulette E. Jordan of Plummer, Rep. John McCrostie of Garden City and Rep. Melissa Wintrow of Boise - did not attend the hearing for Senate Bill 1404, also known as the Idaho Unborn Infants Dignity Act.

The bill bans the sale or donation of fetal tissue from abortions, and stipulates that it is against public policy for a woman to get pregnant in order to make money off an abortion. Anyone who did donate or sell aborted tissue could be charged with a felony, under the proposed law.

Fetal tissue from abortions is not currently sold or donated in Idaho.

The bill would also have the state registrar of vital statistics office produce miscarriage certificates at the request of parents if the miscarriage was certified by a physician, physician's assistant or nurse.

Rep. Elaine Smith, in explaining the decision to abstain from Thursday's vote, said the bill was "not worthy of our time or attention."

"It is fraudulent to use our time here to run special-interest bills that are in bad public policy," she said.

Legislative Director for Planned Parenthood Hannah Brass Greer also dismissed the bill as "a solution in search of a problem at best, and offensive and harmful at worst."

"Let me be clear: Planned Parenthood does not facilitate fetal tissue donation in the state of Idaho, despite the fact that it is life-saving," she said. "The proponents of the bill know that, but they don't care."

She said the bill came in response to a nationwide tumult that followed the release of several videos created by anti-abortion activists that showed Planned Parenthood workers talking about the disposal of fetal remains.

Planned Parenthood officials have charged that the videos were heavily doctored to make it seem as though the clinics were breaking the law. Two people involved in shooting the undercover videos were indicted by a grand jury earlier this year.

"Planned Parenthood has been cleared of wrongdoing in every single investigation launched in 13 states in response to these videos," Brass Greer said.

Gov. C.L. "Butch" Otter declined to launch an investigation of Idaho's Planned Parenthood facilities, saying there was no evidence to suggest they had broken the law.

Brass Greer said the idea that women get pregnant in order to profit from terminating that pregnancy is incorrect and "does not happen anywhere in the country." She argued lawmakers should spend less time trying to legislate women's medical decisions and focus more on the session's unresolved issues like the healthcare gap and the push to add protections for gay, lesbian and transgender Idahoans.

"[Women] haven't ever and still today don't need the Legislature in the exam room telling them what they can and can't do," she said.

Despite the Democrats' opposition, the bill moved forward out of committee and passed the full house 54-14. The measure is now headed back to the Senate, where members will vote on whether or not to approve amendments. If it gets the green light on the Senate floor, the bill will go to the governor's desk.