The Idaho Department of Water Resources director said this is the sixth time water flow has ceased in 2019. 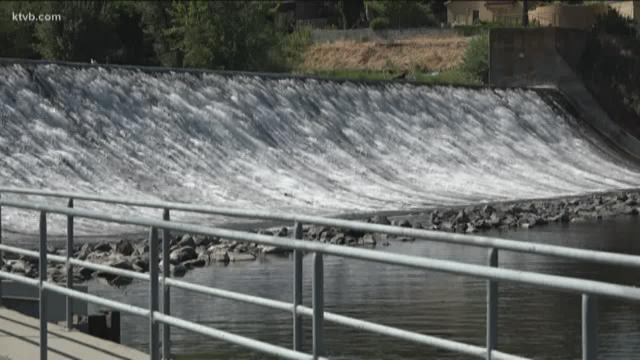 The Barber Dam malfunctioned in the early morning hours of August 2, severely slowing the flow of the Boise River.

According to the Idaho Department of Water Resources, this is a recurring problem - the sixth time it's happened in 2019.

Water Resources issued a notice of violation Aug. 14 against Ada County, who owns and operates the dam by Harris Ranch.

According to the notice of violation, Water Resources estimates that 1,665 cubic feet per second (cfs) of water had to be diverted around Barber Dam due the malfunction.

Water Resources director Gary Spackman told KTVB the true penalty for diverting that amount of water would technically be $832,000, but the statutory maximum civil penalty is $50,000.

IDWR says disruption in the flow of the Boise river that night negatively affected the schedule of irrigators along the river the next day, as well as "fish, maintenance and recreation flows."

Ada County spokesperson Elizabeth Duncan said it was a power outage that caused the hour-long malfunction at Barber Dam.

According to Spackman, the dates of all the incidents in 2019 were during a "water delivery period," depriving irrigators of the water they need to make a living. He wrote Ada County in December.

"The letter warned [Ada County] with this kind of activity, I would have to act to protect the senior water right holders on the river," Spackman said. "That's why I issued the notice of violation."

In addition to depriving irrigators along the river, Boise River Water Master Rex Barrie said the river also experienced a spike in water levels and flow.

According data from the Bureau of Reclamation, the Boise River's average flow at Glenwood Bridge stayed between 700 cfs and 800 cfs from July 29 to Aug. 1.

However, on Aug. 2, the date of the Barber Dam malfunction, the Boise River's flow was holding steady at 740 CFS until the power outage occurred at 1:00 a.m. Water flow began to rapidly decrease, until the Boise River bottomed out at 440 CFS at approximately 5:15 a.m.

According to Barrie, this caused disarray between the several canal operators along the river, creating an over-correction due to the decrease in cfs.

"Canal gates are primarily automated systems now, so whatever the canal operator has told that gate it needs to be at, that gate is opening to the level it was set to," Barrie said. "When you add 25 or 30 canals into the equation, the dominos are really beginning to fall."

Canal operators eventually resolved the water levels, but Spackman said farmers along the river saw the negative effects from the night before in their irrigation schedules the next day.

Ada County leaders plan to meet with the Idaho Department of Resources to discuss the $50,000 fine in the near future.