Meridian mom apologizes for trespassing arrest, says she wasn't there to make a political statement

Brady made statements that contradict what happened at Kleiner Park and blamed the stress of being stuck at home with her kids for what happened. 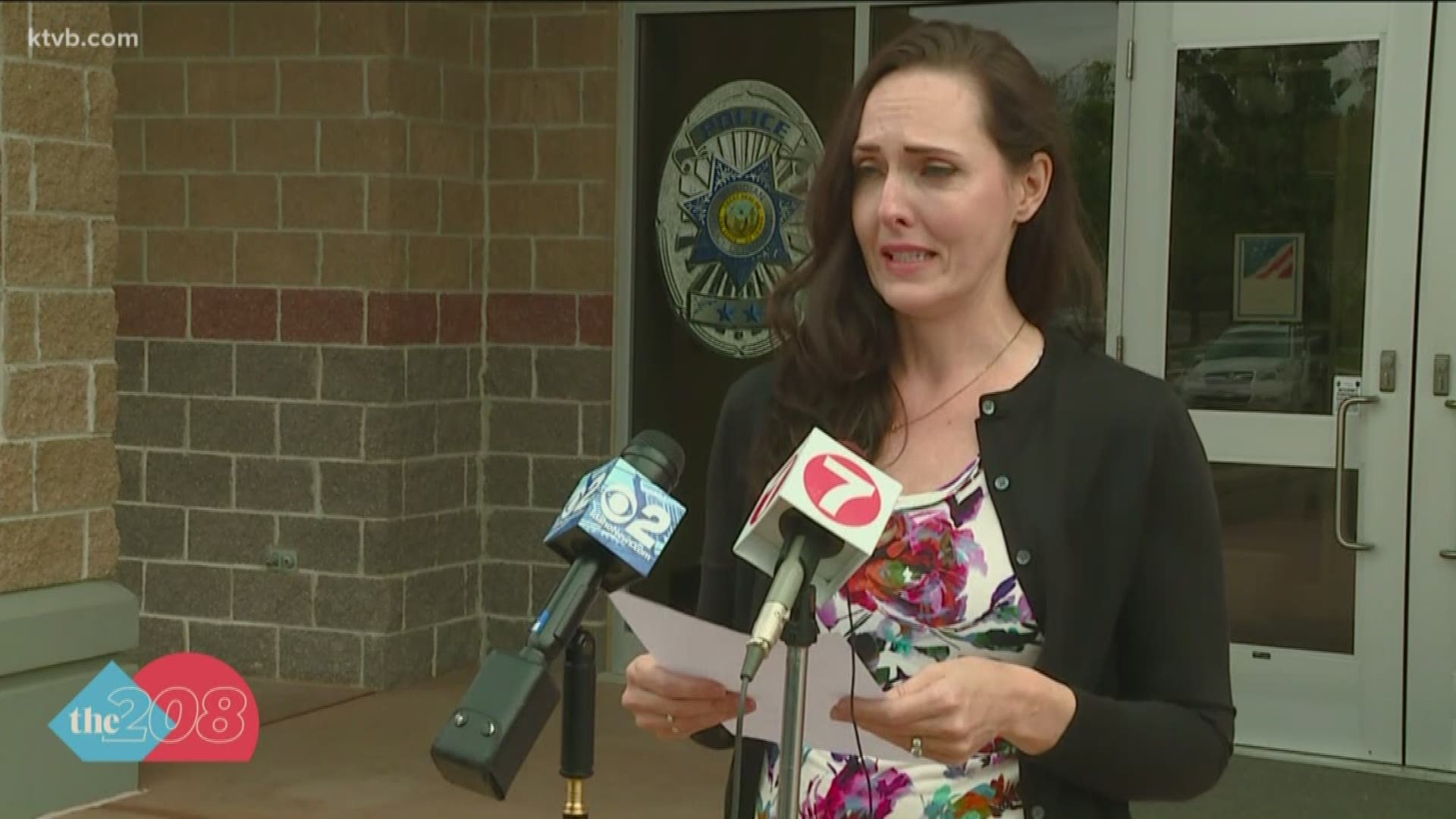 MERIDIAN, Idaho — Correction: A previous version of this story stated Sara Brady is currently affiliated with Health Freedom Idaho. The group contacted KTVB to clarify that Brady has not been a part of the organization since 2019.

The woman arrested on Tuesday afternoon for trespassing at a Meridian Park during Idaho's stay-at-home order has apologized to the police officer who arrested her. She also made statements that contradict what happened at Kleiner Park and blamed the stress of being stuck at home with her kids for what happened.

Forty-year-old Sara Brady spoke at Meridian City Hall on Friday afternoon, apologizing for the behavior that she displayed during the protest and subsequent arrest, which then lead to several other protests.

In her brief press conference, Brady immediately began crying as she read the letter she wrote for the officer that arrested her.

"I never thought a knee-jerk comment made to you out of frustration, by me wanting my kids to play in a park would create such a divide amongst our friends, family, community, the state of Idaho, the nation and the world, a divide that seems impossible for me to mend," Brady said. "The reality of the situation is that I've been stuck at home for the last five weeks and as the rest of America has so, watching this great nation and our god-given rights crumble before my eyes, I let the stress of me being in a house with my four young kids, one with special needs, got the best of me that day."

According to Boise State Public Radio, the Boise affiliate of NPR, reports that Brady is and was part of several anti-vaccine groups - Idahoans for Vaccine Freedom and Health Freedom Idaho until 2019.

The protest that Brady and others attended was a planned event, which Brady said wasn't the case.

"Please know I never had any intention of going to the park to protest or to make any type of political or public statement," she said. "I did not rip any of the tape off the ground and I did not see any signs that prohibited playing on the playground."

Credit: Ada County Jail
Sara Brady of Meridian was arrested on Tuesday afternoon after refusing to leave a closed playground.

MORE: Meridian woman arrested during protest after refusing to leave a closed playground

In this video posted to YouTube of her arrest, Brady and a large group of parents and children are seen at the playground at Kleiner Park in Meridian on Tuesday, with police tape that signaled the park was closed to the public due to the coronavirus pandemic visibly torn down and on the ground.

At the beginning of the viral video, Brady and others repeatedly asked the Meridian Police officers at the scene why they couldn't be there. They also told officers that the caution tape was already ripped down when they got there.

In the moments leading up to Brady's arrest, an unnamed city employee asked Brady and the woman filming it, "Were you guys organized to do this? So all of you just showed up at once?"

During Brady's confrontation with law enforcement, one Meridian Police officer said, "Ma'am, I've told you to exit numerous times, this is it. Exit the playground area now. I'm really trying to be nice about this."

When Brady refused to leave, the officer gave her to the count of five to leave. She then told the officer to arrest her for being in the park when the officer counted down to three and turned around to the officer with her hands behind her back.

As Brady was being handcuffed she said, "Someone call Idaho Freedom Foundation right now and get them on the phone."

During Brady's apology, she claimed she was not there for any protest or political statement, however, the Idaho Freedom Foundation, who she asked someone to call before anyone else when she was arrested, is a libertarian-advocacy group.

After her arrest, Ammon Bundy, a libertarian leader who has organized other protests against stay at home orders, doxxed the officer that was involved in her arrest, releasing his identity and his home address. Bundy then led a protest at the officer's home, which required several police officers to be there to ensure nothing got out of hand.

The City of Meridian closed their playgrounds down last month in order to lessen the spread of COVID-19, which can live on plastics, like a playground slide, for days.

"However, this is not an excuse for my behavior and my part in what happened," Brady said during her apology speech. "While I can't go back in time and change what's happened, but the truth is that I am very sorry that I let my frustrations get the better of me that day."

RELATED: Meridian mayor responds to playground arrest: 'I think that we can all learn from the situation'