Two pedestrians walking on a sidewalk in Fruitland were struck and killed by a vehicle Wednesday afternoon. (Photo courtesy: Argus Observer) 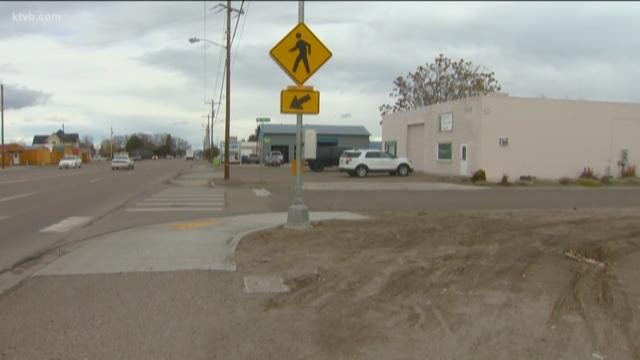 FRUITLAND - Two people are dead after they were struck by a passenger car as they walked on the sidewalk in Fruitland Wednesday afternoon.

According to Idaho State Police, the deadly collision happened at about 2:10 p.m. along U.S. 95 near milepost 64 in Fruitland.

Investigators say the vehicle was driving north "at a high rate of speed" when the the driver suddenly veered off the highway and onto the sidewalk, hitting the pedestrians. ISP said the preliminary investigation indicates that the act could have been intentional.

Authorities say the driver, Jason Verwer, 37, tried to leave the scene of the crash on foot, but was taken into custody by Fruitland Police blocks away. He is currently being held for a mental evaluation.

Autopsies were performed in Boise today at the Ada County Coroner's Office.

Payette County Coroner Keith Schuller, who was one of the first on the scene, says Matthew Parkinson, 22, of Kuna, and his wife, Amelia, 17, died from blunt force trauma due to being struck by a car. He says the couple was holding hands and was struck in the back while walking along the sidewalk about six feet away from the street. He added they had just got married in December.

The deaths are being investigated as homicides, according to ISP. It's unclear whether alcohol or drugs were a factor in the crash. We are told there were several witnesses and surveillance cameras near where the crash occurred.

This incident remains under investigation by Idaho State Police.