An Oregon military spokesman told KGW the guard members were activated Friday and will be fully operational in Salem by no later than Tuesday. 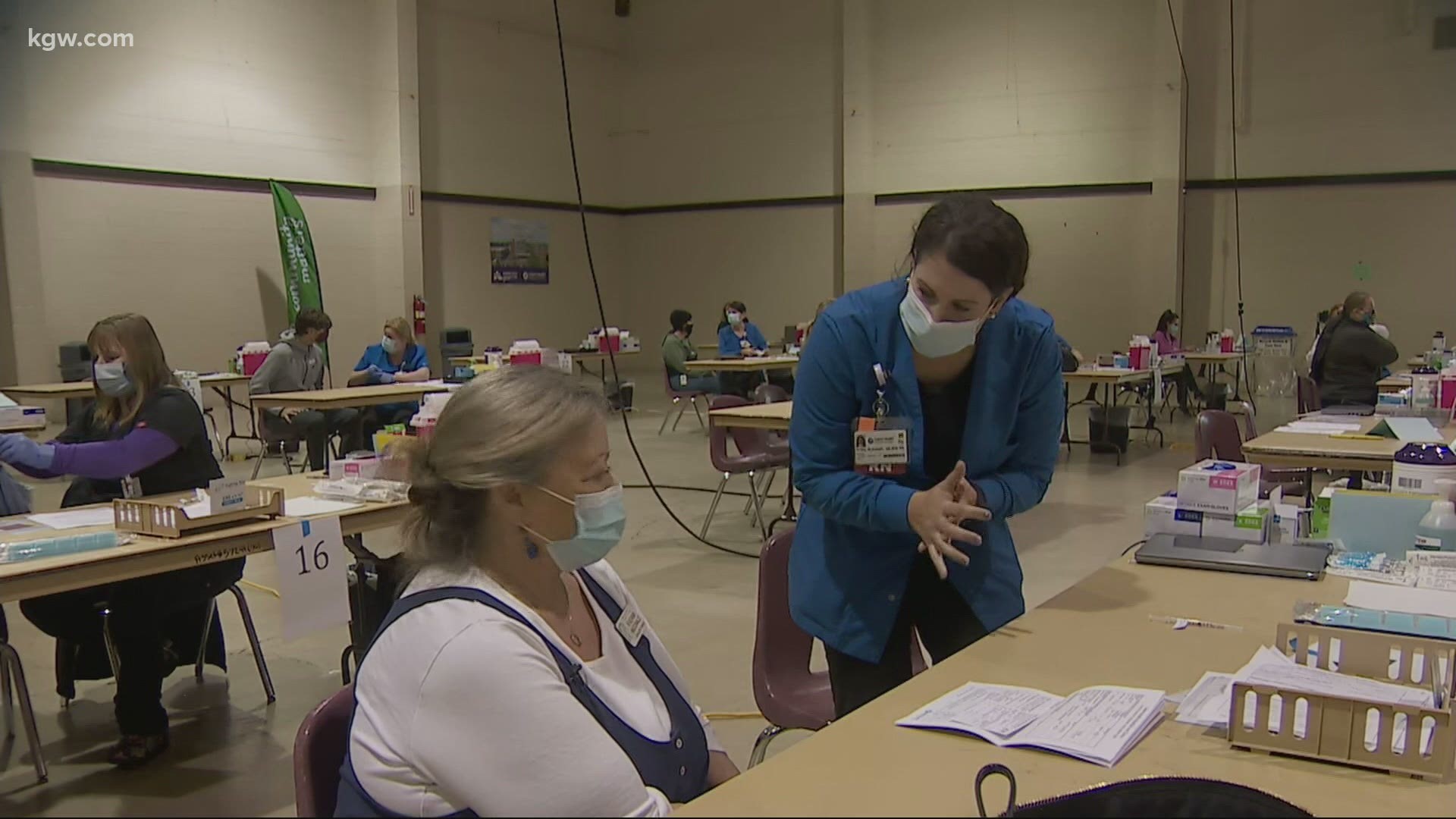 PORTLAND, Ore — The Oregon National Guard will join the effort to speed up vaccinations in the state, Gov. Kate Brown said Friday.

"Our guard members will be providing logistical and nursing support. The goal is to vaccinate 250 people per hour, vaccinating thousands of Oregonians," Brown said.

An Oregon military spokesman told KGW the guard members were activated Friday and will be fully operational in Salem by no later than Tuesday.

Brown made the announcement during a Friday morning news conference with state health and education leaders.

Oregon Health Authority (OHA) Director Patrick Allen said 1.5% of Oregonians are vaccinated and 24% of the state's vaccine doses have been administered so far.

Health leaders have been working to speed up Oregon's vaccine rollout. On Tuesday, Allen said anyone in the Phase 1a group of the state's COVID-19 vaccination plan is now eligible for to get a vaccine, meaning about 400,000 health workers are now eligible. Some health care providers, however, are confused and frustrated that they have not received any guidance on how to get a vaccine.

"We need to get vaccines to everyone in Oregon," Allen said Friday.

Asked when members of Oregon's general population could expect to receive a vaccine, Allen said that the fall of 2021 was "a reasonable target," but said it could be sooner or later than that.

On Thursday, Oregon’s COVID-19 Vaccine Advisory Committee (VAC) met for the first time to discuss how critical workers and at-risk populations will be prioritized in the state’s vaccine rollout. The OHA said that the VAC will co-create a vaccine sequencing plan to focus on prioritizing populations who are most at-risk and hardest hit by the pandemic.

Health officials said that following the Phase 1a group, educators and other staff at pre-kindergarten to grade-12 schools and early learning centers will be the state’s next immediate vaccination priority.

“It's absolutely vital to help our kids safely return to in-person instruction as soon as possible,” Brown said Friday. "We’ve seen across the world how schools can reopen with rigorous health protocols in place."

Last month, the governor said that she hopes more Oregon schools, especially at the elementary school level, will transition to in-person learning by Feb. 15. As of Jan. 1, the decision to bring students back into classrooms schools is being made locally by individual districts and schools.

Brown directed the OHA and Oregon Department of Education (ODE) to evaluate the current metrics and update them if needed by Jan. 19.

At the beginning of Friday's news conference, Brown shared her reaction to Wednesday's violent mob riot at the U.S. Capitol in Washington, D.C., calling it "horrifying and heartbreaking."

"I’m appalled and saddened. The peaceful transition of power is a bedrock of our democracy," Brown said. "We must never, ever take our democracy for granted."