The motion comes as the U.S. Supreme Court is considering, for the first time, whether it is unconstitutional for states to ban the insanity defense, as Idaho has.

BOISE, Idaho — Prosecutors have asked the Idaho Supreme Court to weigh in on the case of a man accused of stabbing a 76-year-old in November 2018 in Southeast Boise.

On Dec. 24, attorneys from the Idaho Office of the Attorney General filed a motion for permissive appeal with the Idaho Supreme Court in the case of Ruben Diaz, 37, who is charged in the attack and has two prior aggravated battery convictions, according to a report in the Idaho Press.

The victim, Gary Vinsonhaler, survived the stabbing and later testified in court against Diaz.

Prosecutors are arguing that evidence about Diaz’s mental state at the time of the attack shouldn’t be used at trial, because they say it amounts to an insanity defense — and Idaho is one of four states in the country where the insanity defense is not allowed.

However, when sentencing, judges can consider a defendant's mental state.

Diaz’s defense attorneys believe the evidence about their client's mental state can be used legally. They say Diaz didn’t know the man he is accused of attacking was a human, and are thus presenting a “mistake of fact” defense.

The motion comes as the U.S. Supreme Court is considering, for the first time, whether it is unconstitutional for states to ban the insanity defense, as Idaho has done. In October, justices heard arguments in a case from Kansas, another state with no insanity defense. The court is expected to issue an opinion this spring or summer.

The attorneys in Diaz's case aren't presenting an insanity defense, but some of the same issues, such as a defendant's state of mind at the time of alleged crime, are still at play. The Idaho Supreme Court would only decide whether the district court judge erred in his ruling that the evidence can be used — the higher court would not decide Diaz’s guilt or innocence.

In August and September, Diaz’s attorneys filed reports in the case from James Davidson, a psychologist who interviewed Diaz about his mental state on the day prosecutors say Diaz stabbed Vinsonhaler after following the elderly man into his house in the 3900 block of Preamble Place in Boise. Vinsonhaler had been raking leaves in his yard.

While those reports are not public, the case’s judge and attorneys have referenced them in documents and in court since then.

Davidson found Diaz, who has received treatment for schizophrenia in the past, was delusional at the time of the attack and thought Vinsonhaler was an alien.

RELATED: 'If he hadn’t arrived when he did, I probably wouldn't be here': Boise stabbing victim thanks officer who saved his life 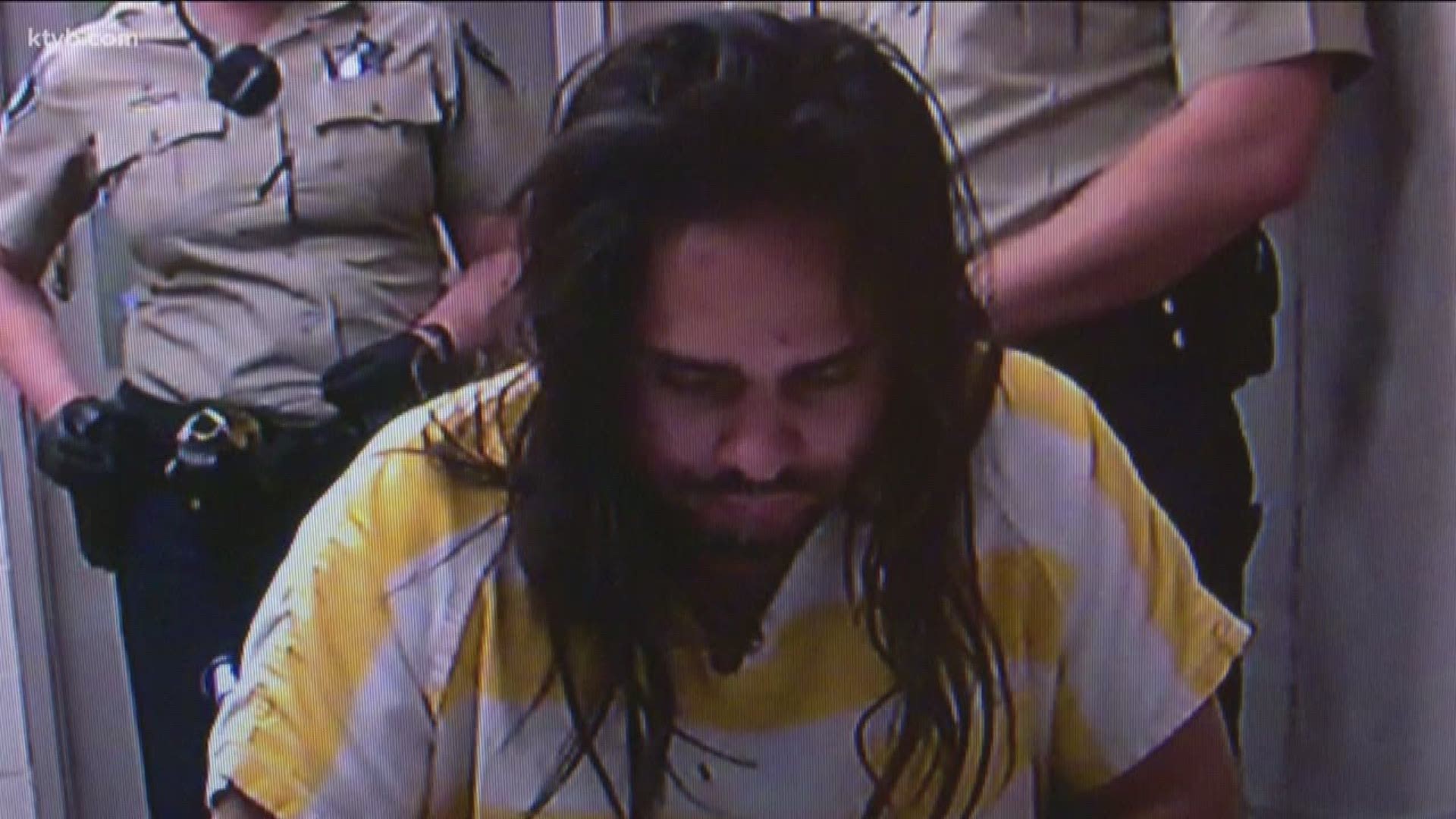 Diaz had served time in prison as a result of two stabbings he committed in 2007 and 2008 — and both times, he’d been off his medication and believed people around him to be aliens, he later said at a parole hearing, according to hearing minutes.

On Nov. 8, 2018, when prosecutors say Diaz stabbed Vinsonhaler, Diaz was on parole and living at a group home a short walk from Vinsonhaler’s house where the incident occurred. Group home staff and Diaz’s parole officer were tasked with making sure he took his medication and complied with probation.

Diaz’s attorneys argue that, because Diaz didn’t know he was attacking a human being, he could not form the necessary mental state to willfully have committed the crime.

“I understand largely this crime is on video, and in my understanding of the defense psychology report, Mr. Diaz has essentially confessed to doing the act alleged here,” said 4th District Court Judge Jonathan Medema at a Jan. 21 hearing. “The issue is simply his mental state at the time that he did so.”

The question, prosecutors wrote in their Dec. 24 motion to the Idaho Supreme Court, is “whether Diaz’s act of stabbing the victim was ‘[w]illful.’”

Prosecutors believe the act was.

“Even if Diaz believed he was battering an alien, he was willfully committing a battery,” attorneys wrote in the motion.

The Idaho Supreme Court has not yet decided if it will hear attorneys’ arguments on the matter. Attorneys are waiting for that decision before they move forward in the case, although there is a hearing scheduled on March 3 during which they will discuss what to do next.

If the higher court makes a decision before then, though, Medema told attorneys he would let them know and they would have a hearing sooner.

Since April 2018, the Ada County Prosecutor’s Office has charged eight people with first- or second-degree murder. Three of those people — Kimberly Swa, Timmy Kinner Jr., and Andrew Ray Garcia — have, at some point in their court cases, been declared by a judge to be mentally unfit to proceed and were ordered to receive treatment. A fourth, David Randall, who was arrested in December on suspicion of killing his ex-girlfriend, has a competency hearing scheduled for February.

Diaz was declared mentally unfit for trial and underwent more than five months of treatment at one of Idaho’s state psychiatric hospitals before he was found in April to be mentally competent.

In Idaho, if a judge feels a person is mentally unfit to proceed — meaning they lack the ability to understand the court process and cannot meaningfully participate in their own defense — they are ordered to undergo treatment to restore their mental competency.

If at any point in the process they are ruled to be competent again, they must return to court to face the charges against them. Doctors in Diaz’s case recommended he be tried as soon as possible to avoid him slipping back into mental incompetency — something they routinely recommend in Idaho in cases in which people must be restored to competency.

But the U.S. Supreme Court is considering for the first time whether states may legally abolish the insanity defense as Idaho has done, or whether removing the defense is a violation of the Eighth and Fourteenth Amendments. In October, justices heard arguments in the case of Kahler v. Kansas, involving James Kahler, who was convicted of murder and sentenced to death after he shot and killed his ex-wife, her mother and two of their three children in 2009, according to The Atlantic. Kahler raised an insanity defense at trial, claiming his mental illnesses — depression and personality disorders — meant he couldn’t form the guilty mindset necessary for conviction.

The defense has existed in criminal law in one form or another for centuries, but when John W. Hinckley Jr. — the man who shot President Ronald Reagan and three others in an assassination attempt outside the Washington Hilton in 1981 — used the defense successfully at trial, four states abolished it. It remains prohibited in Idaho, Kansas, Utah and Montana.

The U.S. Supreme Court, in a 3-4 decision, previously declined to rule on the issue in an Idaho case in 2012 when John Joseph Delling appealed to the court. Delling had been sentenced to life in prison after a weekslong crime spree in which he killed two people and seriously injured a third in 2007. Delling later explained he’d become “a type of Jesus” and he attacked people because they were stealing his “energy,” according to the Washington Post.

Shaakirrah Sanders, a University of Idaho law professor, said she thought the court’s decision not to hear Delling’s case left many in Idaho on “pins and needles,” due to lack of clarity about whether abolishing the death penalty is legal or not.

The implications of Kahler v. Kansas for Idaho depend largely on how the U.S. Supreme Court rules, Sanders said. It’s possible justices might rule narrowly and say only Kansas acted unconstitutionally in banning the insanity defense. But justices could go further and say all states must have language in their statutes allowing for an insanity defense — meaning defendants can claim they aren’t criminally liable, even if it’s proven they did commit the crime they’re accused of.

“What’s going to be tricky here is ‘insanity’ is a pretty broad term,” Sanders said.

Thus, even if the U.S. Supreme Court rules it’s unconstitutional for states to abolish the defense, it would likely take more litigation to define when and how the defense can be used — and all of those debates would play out in lower courts.

“For Idaho, I certainly think this is a case we should have our eyes on,” Sanders said.