Father W. Thomas Faucher, 72, faces 12 counts of sexual exploitation of a child, as well as additional charges for possession of marijuana and ecstasy. 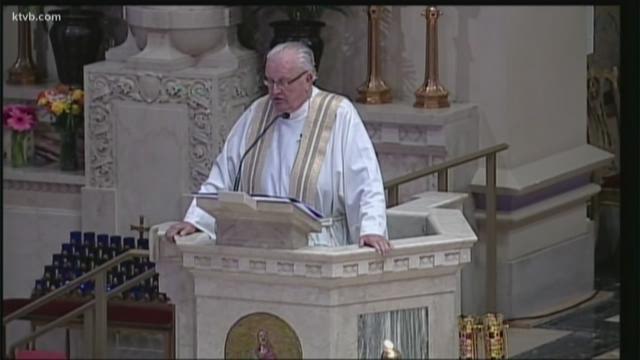 The news of Rev. W. Thomas Faucher’s arrest and the evidence collected by law

enforcement agencies is deeply disturbing to say the least. The shock and emotions that

many Catholics and others are experiencing over the allegations are understandable.

“When I first heard of these allegations, I was absolutely stunned,” said Bishop Peter F.

Christensen, Bishop of the Diocese of Boise. Bishop Christensen continued by stating the

diocese has never received similar complaints regarding Father Faucher, and if the Diocese

had, it would have immediately contacted law enforcement officials, as it would for any

“If these allegations are true and proven in court, they are a betrayal of the trust we place in

all ministers such as Father Faucher. Anyone who takes advantage of and exploits children

for their own gratification is absolutely wrong. There are no excuses for such behavior by

any one of our clergy,” Christensen said. He concluded by stating that we must pray that

the truth of this matter is revealed; pray that any children who are exploited may be healed

by the grace of God, as we also pray for an end to such a disgusting evil.

Bishop Christensen, on behalf of the entire diocese, encourages victims of child sexual

abuse to come forward and report to law enforcement officials. They may also report to

Father W. Thomas Faucher, 72, faces 12 counts of sexual exploitation of a child, as well as additional charges for possession of marijuana and ecstasy. Two of the sexual exploitation charges are related to the distribution of child pornography, although Faucher is not accused of creating any of the disturbing images he allegedly shared.

Prosecutor Kassandra Slaven said during Faucher's Monday arraignment that investigators zeroed in on the priest after receiving a tip from the National Center for Missing and Exploited Children that his email address had been used to send two child pornography images to another person. In the email exchange, Slaven said, Faucher expressed a sexual interest in children and indicated he was interested in "grandpa incest" pornography.

The IP address from which the email was sent was traced back to Faucher's home, a house he rents from the Catholic diocese. When officers arrived with the search warrant, Slaven said, they found an online chat open on his computer in which the defendant wrote about his desire to molest children "as well as physically harm a child."

A full forensic analysis of Faucher's computer is still pending. But Slaven said some of the material seized by police depicted torture and sexual abuse of "very young children," including infants and toddlers.

She asked Judge Michael Lojek to set bond at $500,000, arguing that Faucher was a danger to society and may try to flee the country if released.

But the priest's attorney, Mark Manweiler, said that such a high bond was unnecessary.

"It would be an understatement to say he would be a highly-respected and valuable member of our community," he said.

More than a dozen of the retired priest's supporters attended the hearing, many of them sitting through the five-and-a-half hour arraignment calendar as they waited for Faucher's case to come up.

Manweiler noted that Faucher is cooperating with law enforcement, agreeing to a five-hour interview with officers after they searched his home. The lawyer also stressed that the priest is not accused of actually molesting any children.

"There's never been a single complaint of him acting inappropriately with children," he said.

Roman Catholic Diocese of Boise said the church had never received any complaints or other indications of inappropriate behavior from Faucher, despite his countless interactions with adults and children in his role at St. Mary's. Faucher, who has preached at the church several times after retiring, will no longer be allowed to minister, due to the serious nature of the charges, the diocese said.

Diocese spokesman Gene Fadness said the church is not paying for Faucher's defense lawyer, and added that the diocese is cooperating with the Idaho Attorney General's investigation. The church will conduct its own review after the AG's investigation is complete, he said.

According to the church's website, Faucher was raised in Boise and graduated from St. Mary's Grade School in 1959. He was ordained in Boise in 1971 and held numerous assignments in and out of Idaho. A diocese spokesman said he returned to St. Mary's in the early 2000's.

Lojek - who blocked KTVB and other news outlets from bringing camera equipment into the courtroom or recording the proceedings - ultimately set Faucher's bond at $250,000, telling the defendant he had taken reputation in the community and lack of criminal history into consideration along with the "very, very serious" nature of the allegations.

The judge ordered that if Faucher is able to post bond, he must surrender his passport, agree to GPS monitoring and have no access to the Internet or any minors while the case is pending. Lojek also ordered Faucher to not use any illegal drugs, but told the priest he would not bar him from drinking alcohol, so he could continue to take communion.

A preliminary hearing in the case is set for Feb. 15.