Police say a man fled the scene in a vehicle but was apprehended a short time later in Caldwell. 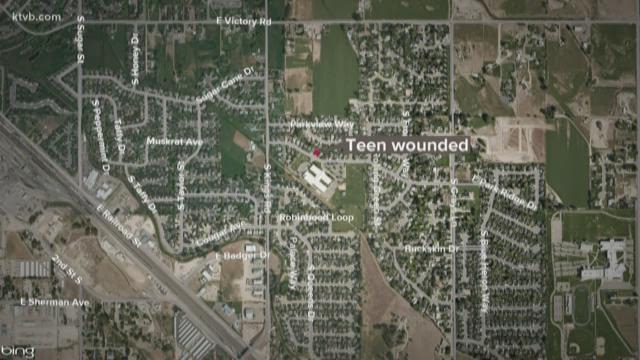 NAMPA, Idaho — One person was taken into custody after a 15-year-old boy was shot in a Nampa neighborhood Thursday afternoon, police said.

After investigating further, a second suspect was taken into custody on Friday. A 16-year-old boy was arrested on four charges of aggravated assault, according to Nampa Police officers.

The victims were two boys and two girls all aged between 15 and 16 years old. They were traveling in a car together when Christopher Baker, 34, of Caldwell and the 16-year-old boy were following them in another vehicle.

Baker was looking for a family member who was in the car, police said. The victims stopped their car and one of the teenage boys' got hit by the gunfire.

Officers were called to East Park Ridge Drive at 5:13 p.m. for a report of a shooting. At a home they found a teen suffering from an apparent gunshot wound to his leg.

At this point, there is no word on the teen's condition.

Police say a man fled the scene in a vehicle but was apprehended a short time later in Caldwell. Baker was booked into the Canyon County Jail on three drug-related charges. He has not been charged with any shooting-related charges.

The 16-year-old boy is in custody at the Canyon Juvenile Detention Center in Caldwell.

Crime scene investigators are still processing the scene and doing further interviews to continue piecing together the circumstances surrounding the shooting.

The home where the shooting happened is across the street from Park Ridge Elementary School.

Anyone with information about the shooting is asked to contact Nampa Police Sgt. Rodgers at (208) 475-5714.

RELATED: There were more U.S. mass shootings in 2019 than days on the calendar