According to court documents, the baby died from intrauterine pneumonia. 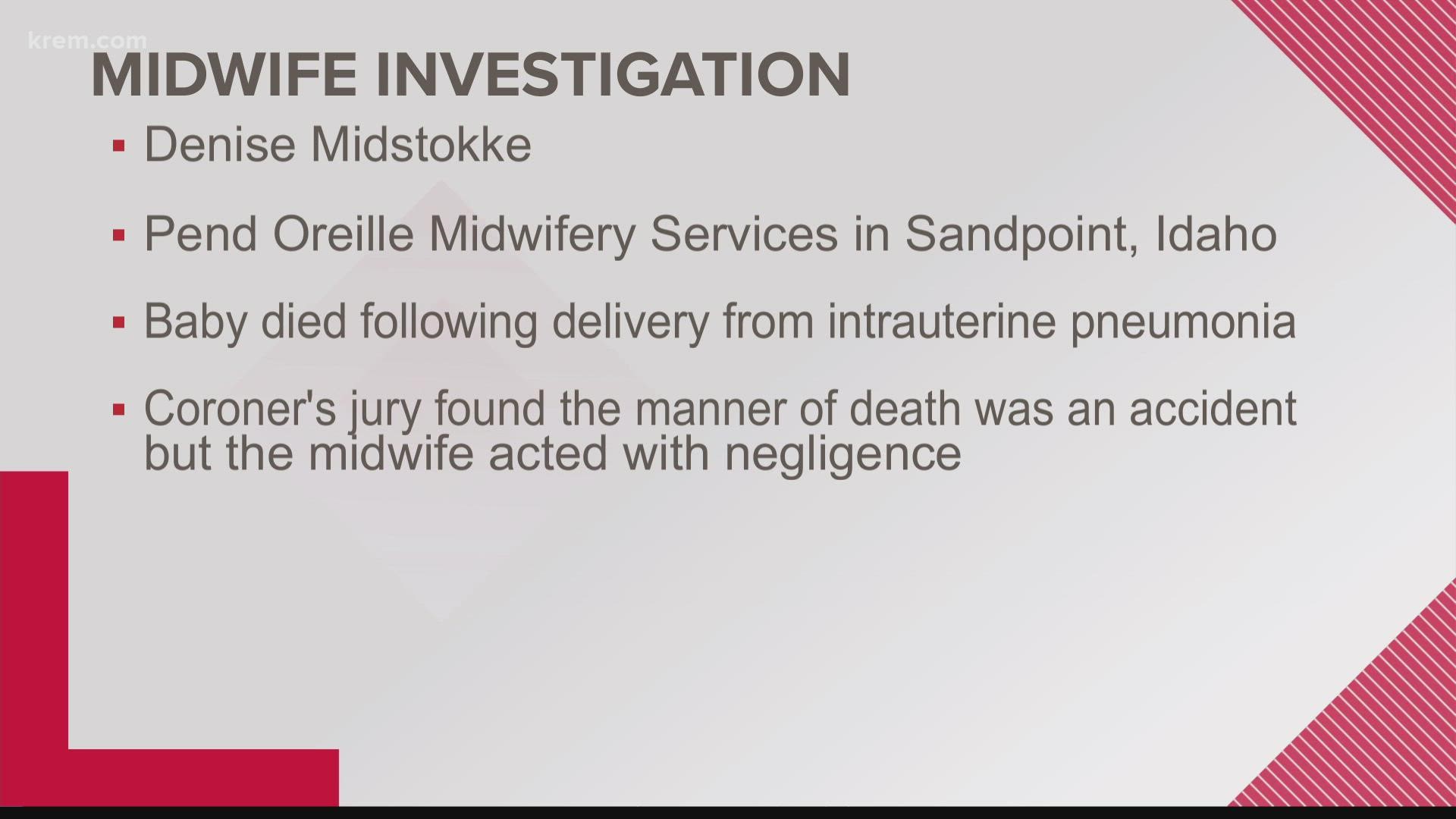 BONNER COUNTY, Idaho — WARNING: This article contains graphic details regarding the death of a baby.

A midwife in Bonner County is charged with involuntary manslaughter after an at-home birth ended in tragedy.

Denise Midstokke is the owner of Pend Oreille Midwifery Services in Sandpoint, Idaho. She was in charge of caring for a woman during her pregnancy and childbirth. On Jan. 26, she delivered a baby who died hours later from intrauterine pneumonia, according to court documents.

Midstokke, 64, is out on $50,000 bail for charges of involuntary manslaughter and destruction of evidence, according to KREM 2 news partner the Bonner County Daily Bee. If convicted, she could see a sentence of up to life in prison, and up to a $50,000 fine. In her conditions of release, Midstokke had to surrender her passport and cease providing midwife services until further notice from the court.

On June 2, Magistrate Judge Tara Harden found probable cause in the charges made against Midstokke, but a preliminary hearing has yet to happen. Midstokke waived her right to a speedy trial on Aug. 4.

Five witnesses, were subpoenaed to testify as witnesses on Aug. 4. According to court minutes, Midstokke’s defense asked for a continuance in the case, mentioning they were considering entering mediation. The mediation process is where a mediator, usually a judge, reaches an agreement with both parties outside of court.

Spokane County Medical Examiner Dr. Sally Aiken performed an autopsy on Jan. 29 and testified that she discovered an infection that caused the baby's lungs "had no capacity to absorb oxygen," court documents say.

Aiken said the insertion of a Foley catheter could possibly cause the infection the baby died from, court records say. Dr. Aiken added that she felt the death was not salvageable and there wasn't a way she could have been resuscitated due to the state of her lungs.

It was found that notes taken by Krista Hayes, the other midwife, on Jan. 15 and 16 were not included in Midstokke’s lab report and several entries by Hayes were modified or deleted.

According to court documents, Midstokke attempted to induce labor by inserting an inflatable catheter on Jan. 15., which is considered to be outside the scope of midwifery. At that point, the mother was 37 weeks and four days pregnant. That night, the catheter fell out and the mother went to Midstokke's midwifery center the morning of Jan. 16 to be checked out and have the catheter replaced.

Later that evening, Midstokke reportedly visited the mother, removed the catheter on the couch in her home to allow her to urinate and subsequently performed a vaginal exam on the non-sterile couch.

Midstokke did not see the mother again until Jan. 26, when her water broke while she was in the shower at about 7:30 p.m. After feeling feverish and learning she was running a fever of 100.5 degrees, the mother had her husband call and inform Midstokke of the fever.

Midstokke reportedly arrived at the home at about 9:30 p.m. with another midwife and neither checked the mother's blood pressure or temperature, court documents say, even though midwifery guidelines require that a mother must be transferred to a medical facility if she's running a temperature of 100.4 or higher.

The baby was delivered at 10:53 p.m., and she never took a breath on her own, documents say. Both midwives attempted to get the baby to breathe and at about 11:12 p.m. the child's father demanded an ambulance. Midstokke assured the baby's father that the child had "good heart tones and good oxygen levels," according to documents. She then made the call to 911 at 11:15 p.m., according to court documents.

At about 1 a.m., the infant's father notified Midstokke by phone from the hospital that the child had died.

The autopsy was then performed on Jan. 29.

A coroner's jury is a body convened to assist a coroner in determining the identity of a deceased person and the cause of death.

After one-and-a-half days of sworn testimony, the coroner's jury found that the manner of death was an accident but Midstokke acted with negligence. They said the negligence was due to:

In Midstokke's testimony, she said she has been a midwife for 35 years, licensed for 10 years and involved in nearly 1,500 births. Midstokke said her team made the decision to place the catheter in the mother and other than some discomfort, it was successful.

When asked about the necessity of inserting the catheter for 10-days, she said she was not aware of any risks and didn't see anything concerning during those 10-days.

During the birth, Midstokke said the baby came out moving her shoulders and had a heart beat. Then, Midstokke said she saw blood coming out of the baby's nose and she did not know what that meant.

Midstokke then said she did call 911 when she needed to.

According to a subpoenaed report, Midstokke has been placed under administrative investigation regarding her standard of care in this case and she refused to surrender her license to practice midwifery.