The 13-page probable cause statement details text messages and other online records allegedly showing Lori conspired with her brother to kill her then-husband. 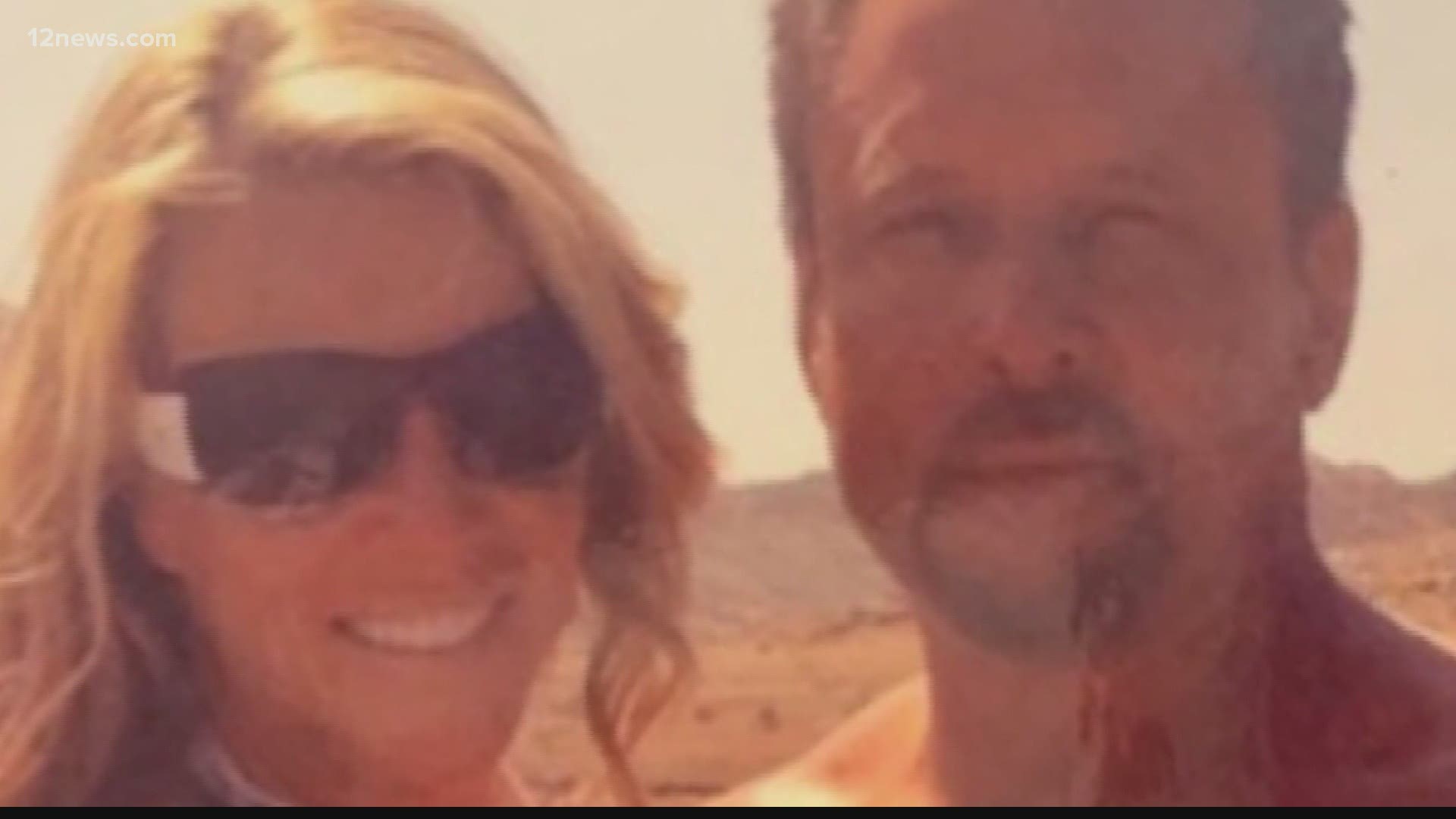 CHANDLER, Ariz. — Chandler police revealed on July 1 all the evidence they've gathered in a case against Lori Vallow Daybell, accused of conspiring with her brother to murder her fourth husband Charles Vallow.

The 13-page probable cause statement details text messages and other online records used in their case.

Lori Vallow Daybell was indicted in Maricopa County on Tuesday for allegedly conspiring to murder Charles Vallow in Chandler.

It’s the latest twist while the serpentine case surrounding the disappearance and deaths of her children is paused in Idaho.

Lori Vallow Daybell and her new husband, Chad Daybell,  were in jail in Idaho facing murder and conspiracy charges connected to the deaths of Lori's children, Tylee and JJ, along with Chad Daybell's first wife, Tammy Daybell.

However, on July 7, the Maricopa County Attorney's office declined to prosecute Chad Daybell on the conspiracy to commit murder charge due to "no reasonable likelihood of conviction."

Charles Vallow was shot and killed by Lori's brother Alex Cox at their home in Chandler in July 2019, after Alex told police he shot Charles in self-defense after Charles hit him with a baseball bat during an argument.

The newly released evidence from Chandler police said Lori had just moved into the home in Chandler on Four Peaks Place after she and Charles had become estranged. At the time Charles was staying in Texas, where the family used to live.

Court records show by this point Lori had already connected with Chad Daybell, a doomsday author in Rexburg, Idaho, and was part of a group that followed Daybell's alleged "end of times" teachings.

Charles reportedly confronted Lori about her relationship with Chad Daybell on June 29, 2019, and told her he'd tell Chad's wife Tammy if she didn't come clean.

The probable cause statement said Charles was hoping to plan an intervention along with another one of Lori's brothers, regarding Lori's darkening religious beliefs. Charles planned to fly back to Arizona for this the week of his death.

The records show Lori found out about the intervention and reached out to her brother, Alex Cox, and two other unnamed people to warn them about Charles' plan.

Lori later asked Alex Cox to stand by her for "protection." In text messages before Charles' death, she told him, in part, "Thank you for standing by me. It's all coming to a head this week..."  Chandler police noted Alex's "mission on this earth was to protect his sister."

The probable cause statement details that Alex was the one to call 911 after shooting Charles, but says he made no attempt to provide aid despite a dispatcher giving him CPR instructions on the phone. Chandler police say Charles "would have laid dead or dying for approximately 43 minutes before Alex called 911."

Body camera video from Chandler police showed Lori appeared not to be phased by her brother killing her husband. The probable cause statement said she left the home before Alex shot Charles, taking JJ to Burger King for food, then stopping at Walgreens to buy flip flops for her and Tylee before she returned to the home. Chandler police said phone records showed Alex Cox called Lori during this time before he called 911.

Chandler police say a text message from Lori to Chad Daybell after the shooting talked about death percentages in relation to Charles and Chad's first wife Tammy who would be killed later that year.

You can read the full probable cause statement here:

"I'm worried about her"

Court records show the marriage between Lori and Charles grew rocky by the end of 2018.

At the end of January 2019, Charles called Gilbert police after he returned home from a business trip and told officers he thought Lori's religious beliefs turned radical and that he feared for his own life and their children.

Charles was trying to locate Lori so police could serve her with a mental health petition he filed.

"She needs help," he said to officers. "She needs some serious help. I want her to get help. I’m worried about her."

The probable cause statement from Chandler police noted that Charles claimed in the petition that Lori thought he had been taken over by a dark spirit.

Investigators later uncovered this belief in "dark" sprits was linked to Chad Daybell's religious teachings, according to the probable cause statement:

It was discovered that Lori and Chad believed that they had extraordinary abilities. Some of these abilities included the power to teleport and cause harm to others, the ability to call up natural disasters, the ability to pray away demonic spirits attached to others and also visionary capabilities. Because of these abilities provided to them, they felt that they were qualified to tell whether someone had a “light” or “dark” scale associated with them.

The records go on to say Chad and Lori would refer to people who were "dark" as zombies. Testimony from the case in Idaho shows that Lori also called her children, Tylee and JJ "zombies" that needed to die.

After Charles asked Gilbert police for help, records show Lori gave Gilbert police her side of the story hours later, claiming she wanted Charles out of their home because she allegedly caught him cheating. She told the same to Chandler police when they questioned her about the estranged marriage.

Police say she did get the mental health evaluation and was released.

Charles filed for divorce, but in the months that followed, the couple reportedly reconciled. They were estranged but still married when Chandler police say Alex Cox shot and killed Charles.

Police say the first sign of a conspiracy to harm Charles came in November 2018, when Lori was texting with Zulema Pastenes, who would later become Alex Cox's wife.

Lori reportedly told Pastenes that Charles was "blocking her gifts" and had a conversation, that was redacted from the released statement, that talked about "causing harm to Charles Vallow."

Pastenes is a witness listed in the cases against Lori and Chad in Idaho.  In an Idaho court hearing earlier this year, Pastenes attorney indicated she'd been offered an immunity deal in this case, but didn't elaborate on what that meant or if they took the deal.

Other text messages recovered by Chandler police showed Lori would text others in her religious circle about time to "work on" Charles before his death.

Police later linked this to a text between Lori and Chad Daybell one week after Charles' death. The message detailed that Lori learned Charles changed his life insurance policy before he died, making the beneficiary his sister, Kay, rather than Lori.

She went on to tell Chad she'd still get $4,000 in Social Security money from Charles' death, something police say she only could have known through that online search before Charles died.

Investigators in Chandler say they found no "obvious communication" between Lori and Chad that would show he was "directly involved with the planning of Charles Vallow's murder."

In October 2019, Tammy Daybell died in the Rexburg home she shared with Chad. Her death was originally ruled natural causes, but she was later exhumed and investigators announced charges in her murder in May 2021.

Less than two weeks after her death in November, Lori and Chad would marry in Hawaii. It was around this time that JJ's grandparents, Kay and Larry Woodcock, were starting to worry. They contacted Gilbert police to see if they could do a welfare check on the kids, not realizing Lori took them to Idaho.

Eventually, investigators tracked Lori down in Rexburg but were unable to find the children after they first questioned her about their whereabouts.

When police in Idaho went to circle back with Lori, she was nowhere to be found. Investigators eventually tracked her and Chad down in Hawaii, where she was arrested in February 2020 for failing to produce her kids. She was extradited back to Idaho in March and put in the Madison County Jail, where she's been ever since.

In June 2020, investigators discovered Tylee and JJ's bodies buried in Chad Daybell's backyard. Chad was arrested later that day and has been in the Fremont County Jail ever since.

Last month, the couple was indicted on several felony charges connected to the deaths of the children and Chad's first wife Tammy.

Alex Cox was also listed in Idaho court documents as someone who was involved in the kids' deaths.

Investigators say it was pings from Alex Cox's cell phone that ultimately led them to discover JJ and Tylee's bodies. The records show his phone was in the yard for several hours during the time each child was believed to have been buried.

Cox is also accused of shooting at Lori's niece's ex-husband in Gilbert and attempting to shoot Tammy Daybell in the days leading up to her death. He's not been charged in either of those cases.

Lori ruled "not competent" for trial in Idaho

The latest charge is the first Lori faces in Arizona. The Maricopa County Attorney's Office said any court proceedings in Arizona would begin after the cases in Idaho were concluded.

Last month, just days after new charges were announced for Lori and Chad, court documents were filed saying Lori Vallow Daybell was "not competent" to continue on with her court proceedings.

Records show the psychological assessment was taken before Lori and her current husband, Chad Daybell, were indicted on new murder and conspiracy charges earlier this week connected to the deaths of her children, Tylee and JJ, along with Chad's first wife, Tammy Daybell.

"She is simply not competent to go forward and proceed at this time” David Leroy, former Idaho Attorney General said.

The trial is paused for 90 days as doctors try to get her competent enough to stand trial. If they are not successful, her time admitted could be expanded a further 180 days.

The case against Chad Daybell is still ongoing. His trial for the murder and other related charges is scheduled to start in November 2021.

For the latest, up-to-date information on the Lori Vallow Daybell case subscribe to our YouTube playlist dedicated to the case.