You Can Grow It: Raising backyard chickens 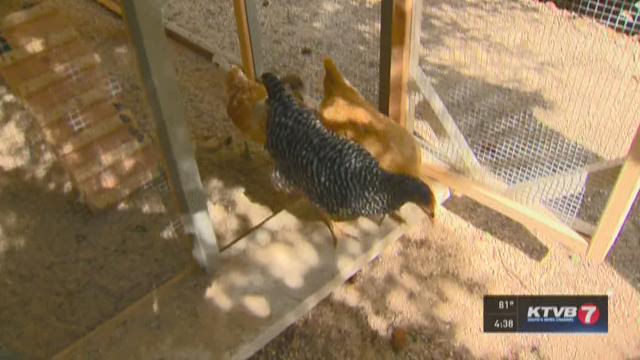 How would you like to step outside your door and get fresh eggs for your breakfast every morning? You can, if you’re raising chickens in your own backyard.

Garden master Jim Duthie gives us a glimpse of what’s involved. And while it can be fun and egg-citing, it does take some preparation and commitment.

It’s Saturday morning with the di Donato family, and time for the girls to get a little exercise. But in this case, the girls are chickens.

Blue and Charlie are two laying hens known as Easter Eggers, so called because their breed lays eggs that often have different colored shells.

“And then you’ve got Delta, which is the Buff Orpington, the little blond one – she’s our little blondie girl.”

“And then you’ve got echo and she’s the Plymouth Rock. She’s the black and white one.”

“So they’re all named after the Jurassic World movie. We thought it would be funny to name them after the velociraptors in that movie. So we’ve got…. Blue, Charlie, Delta and Echo.”

The di Donatos don’t live on a farm. Instead, this is their backyard, right in the middle of a Boise neighborhood.

A lot of people are growing their own food in their backyards, from vegetables to fruit. And now a growing number of people are raising backyard chickens. The benefits include fresh eggs and fertilizer.

“Talked to my wife and I go - what do you think about raising backyard chickens? And she said – yes, do it. Since we’re kind of like animal lovers,” said Mike.

“We’re also very interested in knowing like where our eggs are coming from. I mean, just kind of that whole movement just knowing where your food’s actually coming from. And of course every morning you can go out there and have farm-fresh eggs and be able to pick them up and also know they’re coming from happy chickens.”

Raising backyard chickens takes some planning and commitment, including learning about local city regulations and ordinances.

“We went to a few classes. My wife read quite a few books just to know what we were exactly getting into,” said Mike.

“If you live in the city of Boise, the ordinance is up to six hens, no roosters. And there are a few other details in there where you need to make sure you’re okay when it comes to space and where your chickens can be.”

Finally, a few of months ago, they picked up their baby chicks, called pullets. The chicks were only two days old.

“When you first get into it, you have to get a brooder, and that ranges from $40 to $60 or so for the brooder,” said Mike. “You’ll get a light and your bedding and your food and your trays and everything else. So you can kind of take care of your hatchlings.”

Mike built the outdoor coop himself, although you can buy pre-built coops at farm supply stores. The chicks are now about three months old, so it will be a few more months before they start laying eggs.

“It takes about five to six months for them to lay their first eggs,” said Mike. “It’ll happen after their first molt. We’re hoping right around September we’ll hopefully be getting eggs.”

While the newcomers have made themselves at home in the backyard, it took a little getting used to for the family dogs, who have to put up with an occasional game of….chicken.

“It’s mostly the chickens that go after our little Chihuahua mix,” said Mike.

Eggs are the primary reason for having backyard chickens, but they also produce another benefit. Chicken manure added to the compost pile makes a great organic fertilizer for the garden.

“A lot of people think that chickens smell. If you maintain it, you can’t smell a thing. They’re pretty clean, actually,” said Mike.

And in a few months, the di Donatos expect to have some fresh eggs for breakfast, and they’ll know where they came from.

“And I know what I’ve been feeding my chickens and what they’ve been eating and also that they’ve been loved and cared for, so hopefully that also gives me healthy delicious eggs.”

Oh, and what happens if the chickens don’t end up laying any eggs? Will they become Sunday dinner?

“They will not become dinner,” said Mike. “My wife and I are animal lovers and they’d become kind of pets. They all have their own personalities and love them just like our dogs or any other animals we have. So they’ll probably end up retiring here and living out the rest of their lives. Even if they’re not laying eggs they’ll still be our little chicken pets.”

Most Treasure Valley communities allow for backyard chickens, but be sure to check the local regulations where you live, including homeowners association rules.

If you’re interested in getting a backyard brood started, here are a couple of helpful links: