With more than 400 bands playing in 20 venues over five days organizers of the 8th annual Treefort Music Fest wanted to help music fans get around downtown. This year, they did it with a soundtrack. 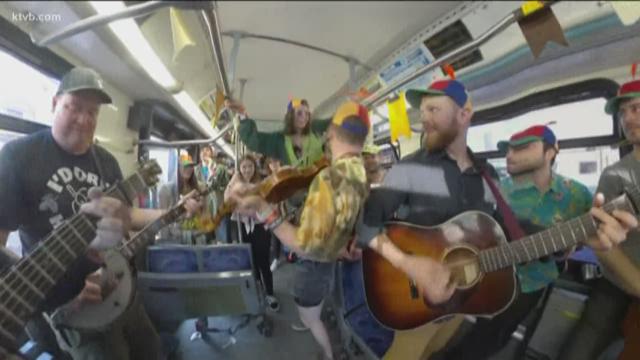 BOISE, Idaho — Buses traversing the City of Trees is not an unusual sight, but for four days in March two Boise buses become a moving musical menagerie.

The 8th annual Treefort Music Fest wrapped up on Sunday. For the first time this year, organizers wanted to offer those trying to get around downtown a ValleyRide venue vehicle, complete with its own en route ensemble.

"It's not your normal, everyday bus route is it?" the bus driver is asked.

"No, it's not," she responds, as she motions a rider toward the back door. "It's more exciting!"

Dubbed "the Treeline," the bus gave festival goers an option to get from place to place with a soundtrack, this hour provided by a 7-piece bluegrass band from Alaska known as Good Not Great.

The libatious loop took riders across a 10-block stretch of Boise along Main and Idaho streets with six stops conveniently located near Treefort stages, all while the band plays on.

If maybe you missed the chance to ride this fun-filled, festival-fueled freighter during the duration of Treefort, now you can hop on-board as we take you inside and along for a 360 degree ride.