Worried about winter? Here's what could be in store for the Treasure Valley 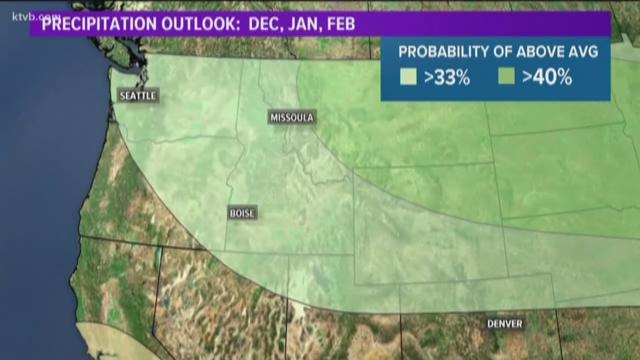 BOISE, Idaho — As meteorologists, we often get the question, “What will this winter be like?” That question is often followed by statements filled with fear or anxiety: “I heard it’s going to be bad!”

Let’s be real, have you ever heard anyone say, “I’m not worried about this winter! It will be a cake-walk!?”

After our “cold-tober,” it’s likely that you may be feeling a little worried about winter. So, let’s talk it out…

In recent years, when anyone asks about the upcoming winter, it’s usually followed by some PTSD from that winter we won’t soon forget. The winter of 2016-2017, which is still referred to as “snowmageddon” or “snowpocalypse.”

With just over 39 inches of snow, 2016-2017 was the sixth snowiest winter on record for Boise, and the snowiest winter since 1985-1986. That brutal winter brought nearly 40” of snow, and long stretches of sub-zero temperatures.

"In '85 and '86, I remember it quite a bit and, I think what stands out in my mind was that we had an inversion that lasted for over 30 days,” says Idaho’s Chief Meteorologist Rick Lantz.

The million-dollar question is: Could that happen again this winter?

"Those were really rough winters, even the really cold ones when we're 23 and 25 below, they don't happen too often,” says Lantz.

Of course, it would be nice if we could see a blockbuster winter coming before it happens; get the bread and milk, the chains and snow tires, pack your patience and prepare. Yes, a forecast is always helpful, so that we can take a peek into the future and plan ahead. But forecasting for a 90-day period, December 1st through the end of February, is tricky business – if not almost impossible.

"People want to do as much long-range planning as possible,” says meteorologist Larry Gebert, “but you always have to remember, in the next five minutes, we're exactly accurate. Anything that goes beyond that becomes this wide range of what can happen."

When it comes to seasonal forecasting, there are several “puzzle pieces” around the globe that meteorologists look at to put together a general outlook. We have to look at the global scale of weather patterns to get some hints as to what the future holds.

One big piece of this puzzle is ENSO, the El Nino Southern Oscillation. This is the warming and cooling of sea surface temperatures in the equatorial Pacific. The state of ENSO can be a big clue, because we can usually forecast it for several months out. In contrast, many of the other global patterns may change every couple to few weeks.

So, we look at ENSO. This year we don’t find El Nino which is the warm phase. We don’t find La Nina, the cold phase. What we find is ENSO neutral, SST that are fairly close to average. Some call it “La Nada.” ENSO neutral could mean anything. To be frank, it’s a bit of a wild card when it comes to seasonal forecasting.

While I was looking at some analogues, I found 23 winters since 1950 that were ENSO neutral years. Out of those 23 winters; 10 had average snowfall in Boise, 8 had below-average snowfall, and 5 winters were wild winters with between 30-40” of snow! One of those “neutral” winters was 1985-1986.

If that gives you a bit of a foreboding feeling, hold on just a second. While we can sometimes find patterns by looking at past winters, it’s important to remember that no two years are exactly alike. Plus, on any given year, a new “puzzle piece” could pop up in our ever-changing climate and throw a potential pattern off.

For example, there’s this: “The Blob” as it’s been called. It’s a big pool of sea surface temperatures off the Pacific coastline that’s abnormally warm. It’s fairly “new,” due to our changing climate. “The Blob” has been found to have been a contributing factor to recent weather patterns that supported drought conditions and warmer than average temperatures across the West in recent years.

Okay, so now, meteorological winter begins on December 1st. By now you’re probably thinking, “What do I need to know?”

#5) The Climate Prediction Center (CPC) outlook shows that above-average temperatures are most likely in Southern Idaho. This is the outlook for all of December, January and February.

Remember, that’s a “general outlook” over 90 days. There will be “warm” winter days, as well as bitterly cold winter days.

#4) The CPC outlook also calls for most likely above-average precipitation. However, with warmer-than-average temperatures, that may mean “more wet than white” for the valley. Still, plan on a few very difficult morning commutes.

"We'll have some snow here in the valley, but I believe it will be around the range of 15-20" total for the year,” Gebert says.

#3) We’ll have more inversion days this winter than we did last winter.

The gloom, the haze, the longing for spring. With a ridge overhead, there will likely be stretches of dull, stagnant air days.

#2) The first half of winter will be different from the second half.

If December is full of snow and cold, February will likely be drier and warmer. We can check in again around January 16th, or “winter half-time.”

Seasonal forecasts are tricky, and they only give us a very general outlook for 90 days of weather. That’s why it’s important to stay on top of the forecast, every day, with our team of meteorologists at KTVB, on-air and online.

If you’re worried about winter, remember: Winter is a season. After it ends, spring begins. This we know for sure.

BOOKMARK THIS PAGE FOR THE LATEST FORECAST: Dense fog again this morning with air stagnation until Friday

RELATED: Up, up and away: Why Boise meteorologists still rely heavily on weather balloons