Here's a look from KGW reporters at what the winter weather looks like Sunday throughout the Portland metro area, Columbia River Gorge and Southwest Washington. 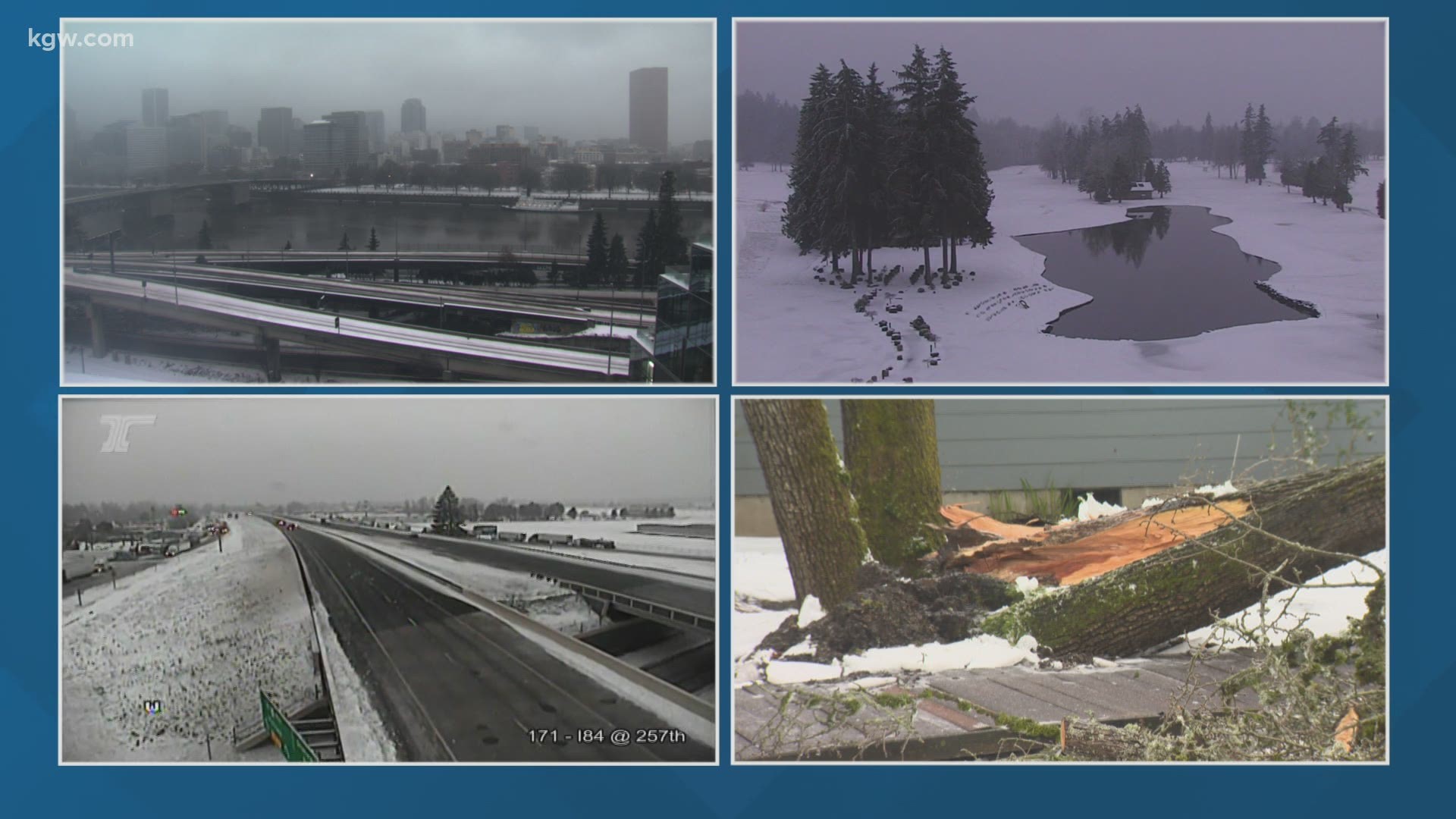 PORTLAND, Ore — The winter weather isn't quite over yet. More snow fell in parts of the Portland area on Sunday morning and an ice storm warning is in place until Monday morning.

The ice and snow has closed roads, brought down trees and power lines and knocked out power for hundreds of thousands of people from southwest Washington down through Salem.

Here's a look at what KGW reporters are seeing as they're out covering the winter storm:

PBOT says if you don't have to travel, don't

Portland Bureau of Transportation spokesperson Dylan Rivera said you shouldn't travel if you don't have to due to treacherous road conditions. However, according to River, there are crews of 100 workers working through the day and another 100 working through the night to help clear the roads.

Right now, PBOT's focus is on major roads through Portland like Burnside, Skyline, Capitol Highway and Multnomah Boulevard. You can view a map put together by PBOT that shows where crews are working to clear the streets.

Tim Gordon headed to Clackamas County to get a look at the icy conditions there. On his way south from Portland, he said 99E was like a "washboard and icy in spots."

Gordon talked to Jim and Peggy Craig, who live on River Road in the Oak Grove area. The Craig's have been without power for 24 hours. They were chipping away at the ice on their sidewalks on Sunday morning.

Portland General Electric (PGE) says more than 112,000 customers are without power in Clackamas County. PGE has 120 crews out working to restore power. They have brought in workers from as far away as Montana to help restore power in our area.

During the KGW Sunrise show on Sunday, PGE spokesperson Steve Corson said in some extreme cases customers could be without power for as long as 10 days.

Arborists and tree services were in high demand, but little work was being done in icy conditions Sunday. Dash Schenck of Davey’s Tree Expert Company was hoping to get his crews out Monday morning if things thawed out a bit.

“Typically we’re able to respond in just a few hours but because of the road conditions I just haven’t felt it’s safe to send our guys out on the roads,” said Schenck.

Just talk to Jim and Peggy Craig, who live along River Road in Milwaukie Oak Grove area. No power for 24 hours and they are chipping away at the ice. Hoping to get a vehicle out to get supplies @kgwnews pic.twitter.com/BqWWo3sPbW

First the pandemic, then all the snow and ice. Restaurants were given the go-ahead to offer limited indoor dining on Friday, but many concerned with safety remained closed.

Keely Chalmers talked with Santa Fe Taqueria and, despite it all, they are opening for Valentine's Day.

Sometimes you just got to enjoy it

When they are not on-air giving you the latest on the snow and ice hitting the region, KGW News reporters, anchors and meteorologists are enjoying the snow. Here are some highlights: