How will Idaho recover from a record-breaking drought season?

As winter approaches, Idaho water systems are left with little to nothing in terms of an "emergency supply" available for next year. 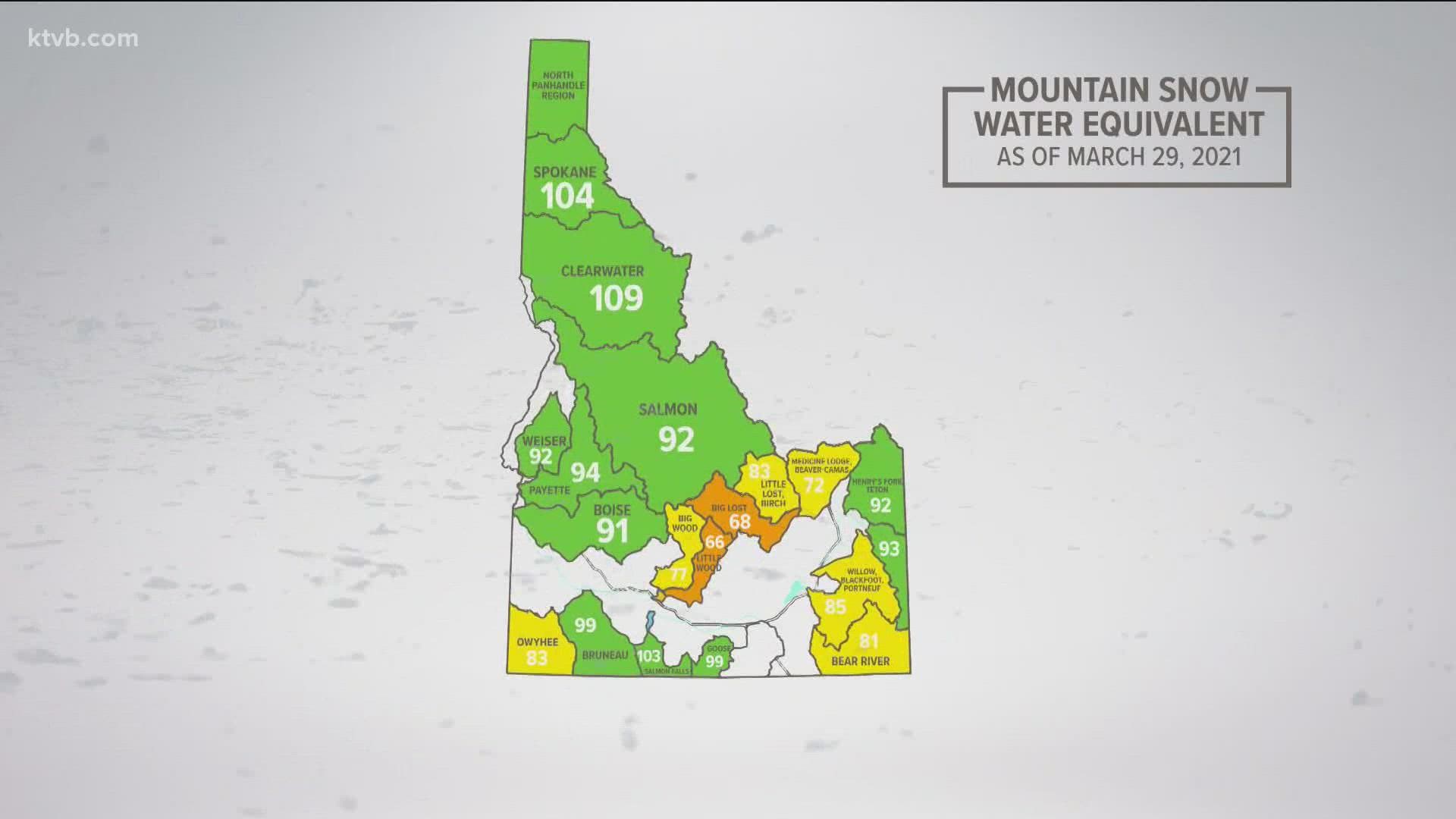 BOISE, Idaho — From the shortest growing season in the Magic Valley in seven decades to reservoirs emptying rapidly, Idaho may continue to feel the effects of one of the most severe drought seasons in state history.

As winter approaches, Idaho water systems are left with little to nothing in terms of an "emergency supply" available for next year.

At the beginning of last spring, the water outlook was not bad. Most of Idaho's mountain areas had decent snowpack and the reservoirs still had a bit of carryover.

The Snow Water Equivalent report from the Idaho Department of Water Resources (IDWR) showed most of Idaho very close to seasonal averages at the end of March 2021. In January, the Idaho Water Supply committee reported that most of the reservoir systems serving southwest Idaho had a decent carryover, with between 50-60% capacity.

Most of the region was not concerned about water last winter. However, the outlook in central Idaho, including the Big Wood, Little Wood and Big lost region, was not as encouraging.

Many of the great snow-making storms last winter rolled in from the west and the northwest. This track appeared to be unfavorable for the Central Mountains, as the available moisture would get “rung out" over the West Central and Boise Mountains. Areas to the east kept missing out.

Runoff was inefficient statewide as spring approached, due in part to snow melting and directly absorbing into the dry ground rather than running off into streams and rivers. In addition, the spring showers that are common in Idaho were virtually nonexistent this year. The showers would have added more overall precipitation but also would have supported more efficient run-off, melting the snowpack from the top rather than the bottom.

Experts believe Idaho will need to produce 120% of an average water year to enter recovery mode this water year.

However, if the wet weather of October is any indication of what's to come, the outlook is hopeful. At the end of October, Idaho saw the perfect storm set-up: The "bomb-cyclone" off the Pacific Northwest coast supported an Atmospheric River that pumped a firehose of moisture into the Gem State. Some storm totals in the mountain areas were three to four inches of precipitation.

Furthermore, a lot that precipitation fell in the central part of Idaho, where it was needed most. This decreased the exceptional drought conditions from covering 23% of the state to just 5% of the state.

Despite this, experts believe the region still needs at least two to four more of these types of storm events to dig out of the drought.

Idaho is in store for another La Nina winter, which typically brings above-average precipitation to the region. However, data from past La Nina years suggests this rainfall may be just what the region needs.

Anytime Idaho has seen back-to-back La Nina winters throughout the last three decades, the second one has always been drier than the year before, according to IDWR Hydrologist David Hoekema.

If this pattern continues, it means that this winter – the second consecutive La Nina winter - could be even drier than last winter. If this happens, Hoekema said Idaho will experience unprecedented drought conditions next year, potentially the worst drought in more than a century. 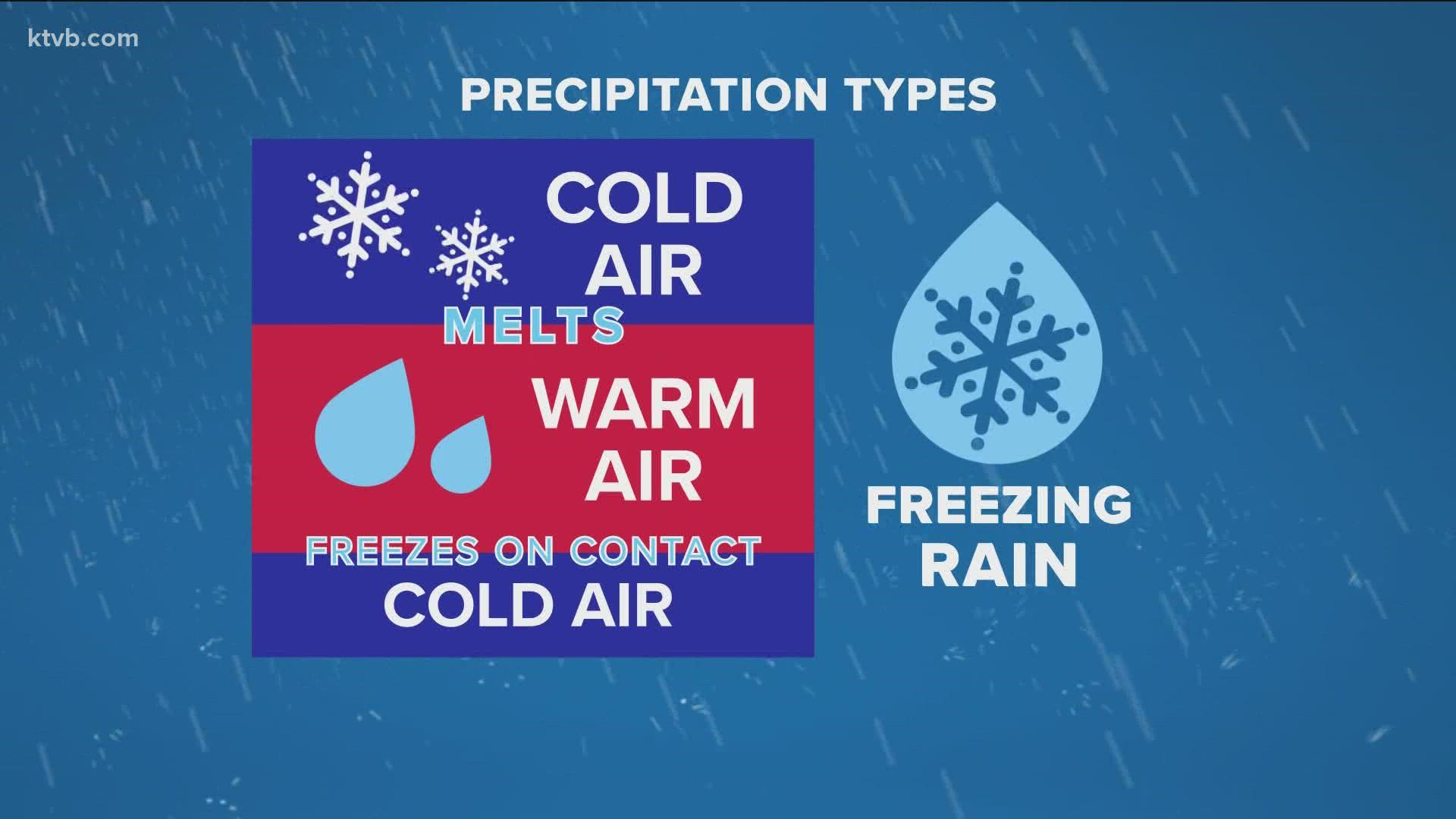 What determines whether precipitation falls as heavy snowflakes or freezing rain?