Police: 9 vehicles were involved in I-84 crash in Boise

ISP says the chain reaction also included two semis, one which burst into flames. Four people were hospitalized, one with life-threatening injuries. 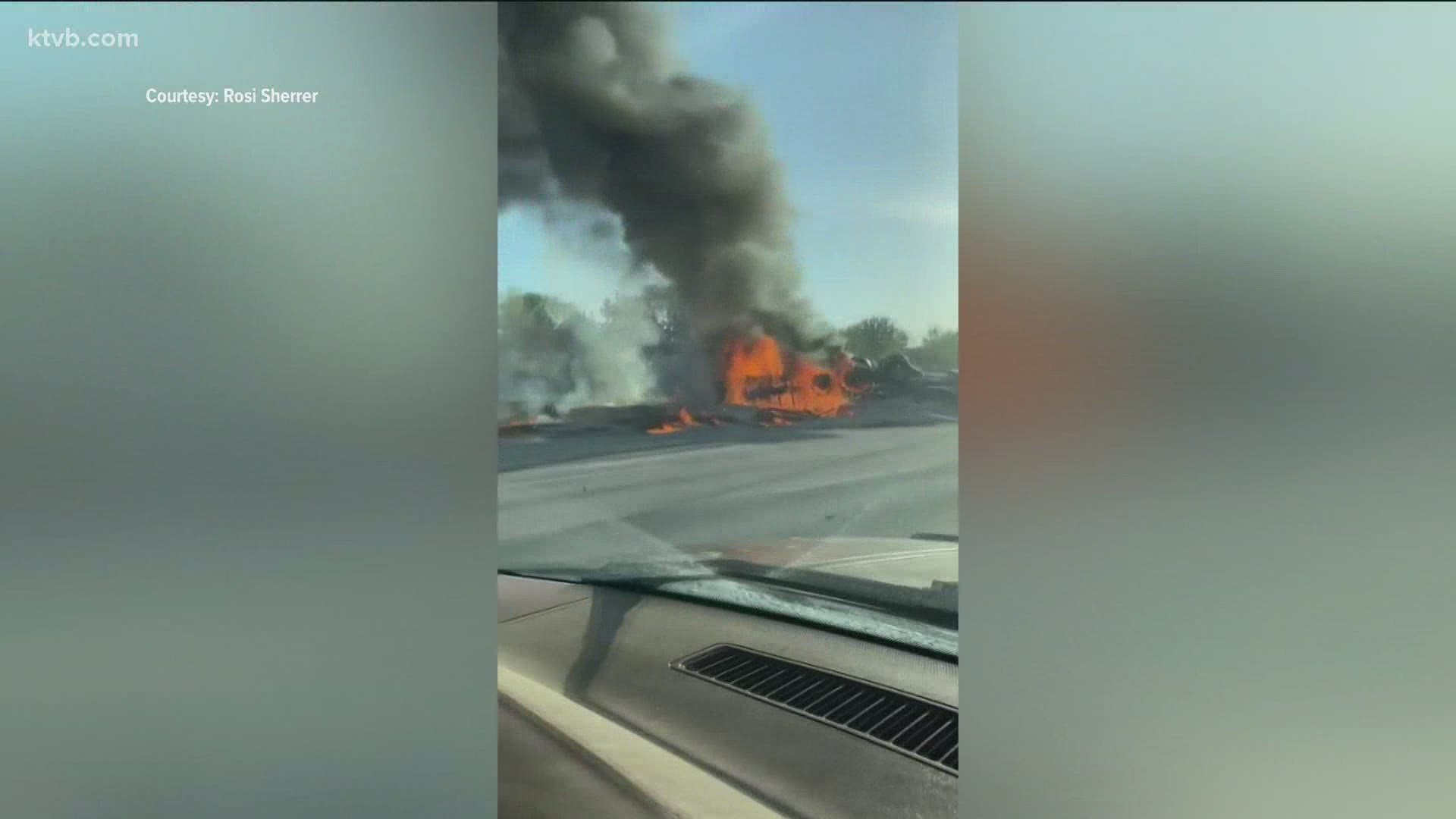 BOISE, Idaho — Idaho State Police are investigating a crash they say involved nine vehicles and blocked or delayed traffic on Interstate 84 for much of the day in Boise.

A Boise woman is hospitalized with what troopers say are life-threatening injuries. Three others were transported to nearby hospitals with minor injuries.

ISP and other emergency responders were dispatched Tuesday morning to a report of a multi-vehicle crash including a semi-truck on fire on I-84 near the Cloverdale overpass at 7:34 a.m.

When troopers arrived, they found a semi-truck hauling 65,000 pounds of lumber on fire in the median. Debris and wreckage from the crash was blocking nearly all traffic in both the east and westbound lanes.

Investigators say the incident began in the eastbound lanes when the driver of a red Toyota Tacoma pickup, a 28-year-old man from Parma, made a sudden lane change and hit the semi that was loaded with lumber. The semi sideswiped an eastbound passenger vehicle before crashing into the concrete median, catching fire and striking a westbound semi that jack-knifed.

Investigators believe that flying debris from one of the semis hit the roof of a westbound Toyota Camry. The impact appears to have knocked the female driver unconscious. Her car was located about a half-mile past the crash scene in a westbound lane. The driver, a 27-year-old woman from Boise, was taken to the hospital with what are reportedly life-threatening injuries.

1 / 12
Ryan Carlton
A vehicle burst into flames on Interstate 84 in Boise during the Tuesday morning commute. Emergency crews are on scene. Traffic is backed up in both directions.

Three others were transported to nearby hospitals with what are reported to be minor injuries; the driver of the red Toyota Tacoma, a 28-year-old Boise man who was the driver of the semi hauling lumber, and a 40-year-old Nampa man who was driving an eastbound in a white Toyota Tacoma pickup. A viewer sent us video of the truck driver narrowly escaping through a window as his truck burst into flames.

Police say the chain reaction from the initial impact involved six eastbound vehicles and three westbound vehicles, including a semi-truck in each direction.

Police say all but one lane of travel each way was blocked for most of the morning and all eastbound lanes were blocked for more than an hour before crews were able to open two lanes in each direction shortly after noon.

The blockage caused traffic back-ups for miles both east and westbound. Delays continue at this hour while road crews work to clear debris and repair the roadway and median.

The cause of the incident remains under investigation by the Idaho State Police.

RELATED: Looking back on the Oregon Trail fire ahead of wildfire season