Hundreds of wild horses rounded up in Eastern Oregon

The Bureau of Land Management said there are not nearly enough resources in the area to sustain the number of wild horses in the herd. 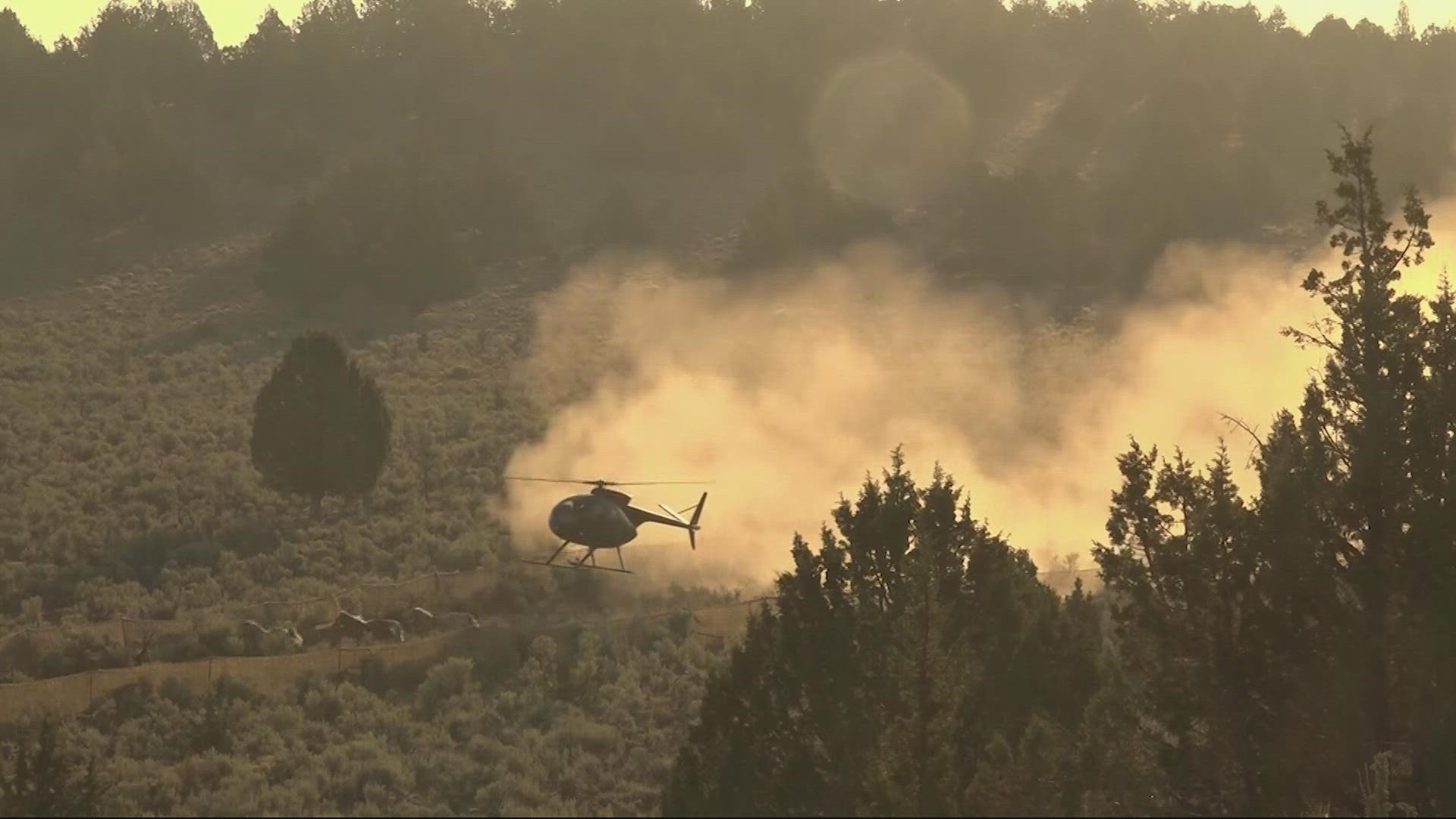 HINES, Ore. — As Oregon grapples with a historic drought and resources become more scarce, the Bureau of Land Management (BLM) rounded up hundreds of wild horses that roam the land in Eastern Oregon. Federal land managers said there are far too many horses for the taxed ecosystem to handle.

On Monday and Tuesday, BLM used helicopters to perform an emergency roundup of 253 wild horses in the Palamino Buttes Herd Management Area (HMA), about 15 miles southeast of Burns in Harney County.

According to BLM, there are enough resources in the Palamino Butte HMA to support 32 to 64 horses — what they call the "Appropriate Management Level" (ALM). Prior to the roundup there were an estimated 427 horses or more living there.

"In the absence of this gather, or if this overpopulation was returned to the range for another season, dozens to hundreds of animals could die of water starvation and/or stray onto privately owned lands outside the HMA boundary," BLM said in a statement.

Dozens of horses were found dead near a dried-up watering hole in northern Arizona in 2018.

Rather than returning these animals to their habitat, some of the horses will be taken to the Off-Range Wild Horse and Burro Corrals, a BLM facility located in Harney County. While there, they’ll be prepared for adoption or sale. Others will be taken to long-term holding facilities located in Midwestern pastures.

Wild horse roundups have long caused conflict between government and wild horse activists. The Biden administration announced plans to sharply increase wild horse roundups this year due to much of the West facing extreme drought conditions, but advocates fear land managers are using the drought as an excuse to appease ranchers and make way for cattle to graze without competing with horses for resources.

“Part of their mandate is to allow for the free roaming behavior of these horses,” said Theresa Barbour, a consultant and legal researcher for Citizens Against Equine Slaughter. “We feel the AMLs that have been set traditionally have no basis in science. They set these AMLs based on the number of horses that the ranchers are willing to be out there.”

BLM said ranchers are making changes to deal with drought conditions too.

“Within the Palomino Buttes HMA, livestock permittees have taken various degrees of voluntary non-use as well as adjusted grazing rotations in response to wild horse utilization levels," BLM said in a statement.

Other activists believe the U.S. government needs to be thinking long-term about how it will manage wild horse populations in the future as a warming climate makes these drought conditions more common.

“There’s nothing that says their viewpoint should be so short term,” said Patience O’Dowd, founder of Citizens Against Equine Slaughter. “We’ve known about climate change for a long time.”

At least one federal lawmaker has concerns about wild horse roundups and the problems they present. California Sen. Dianne Feinstein has called on federal land managers to investigate how many wild horses captured on public lands end up at slaughterhouses. Feinstein also wants BLM to reevaluate the $1,000 cash payments it offers to people who adopt the mustangs. Some horse advocates allege the money provides an unintended incentive to obtain the horses then illegally sell them for slaughter. Feinstein urged Interior Secretary Deb Haaland to investigate how often the adopters have violated regulations protecting the animals and how many have been sold or transported for slaughter.

“Conservation work is not associated with the BLM’s mandate to manage wild horses,” said Manda Kalimian, the founder and president of the CANA Foundation. “They are maintaining the land.”

The CANA Foundation supports and works toward rewilding initiatives, or restoring natural habitats so wild animals can thrive without human intervention.

“The use of the public rangelands, which we pay taxes on, is of great value to the politically higher-ups in these western plains states,” Kalimian said. “It’s all about industry and business. There’s oil, fracking, drilling, coal, uranium. It’s everywhere, because it’s so rich in that place. And the horses are just caught in a land grab.”

According to the USDA Forest Service website, there are about 770 million acres of public rangelands in the U.S. More than 50% of Oregon is federally managed public land.

Kalimian wants to know why BLM and the Forest Service can't relocate the horses to other areas, rather than continue the practice of selling them off.

“You mean to tell me the government can’t find room for 70,000 wild horses?” said Kalimian. “Yes, because of climate change, the variables have changed. Nobody wants to admit or acknowledge that perhaps we have to change the way we manage these public rangelands, our leasing, and our cattle grazing.”

Kalimian argues that horses provide a vital role in managing grassland, and horses are better for the lands than cattle based on the way they graze. She says by rewilding horses, it gives the U.S. a chance to build biodiversity, combat climate change and protect other natural species that could be disappearing due to the effects of a warming planet.