One-third of Idaho is in severe drought: What it means and why that matters

Low water in many parts of the state has a number of impacts, including farm production, wildfire danger, and possibly your power bill. 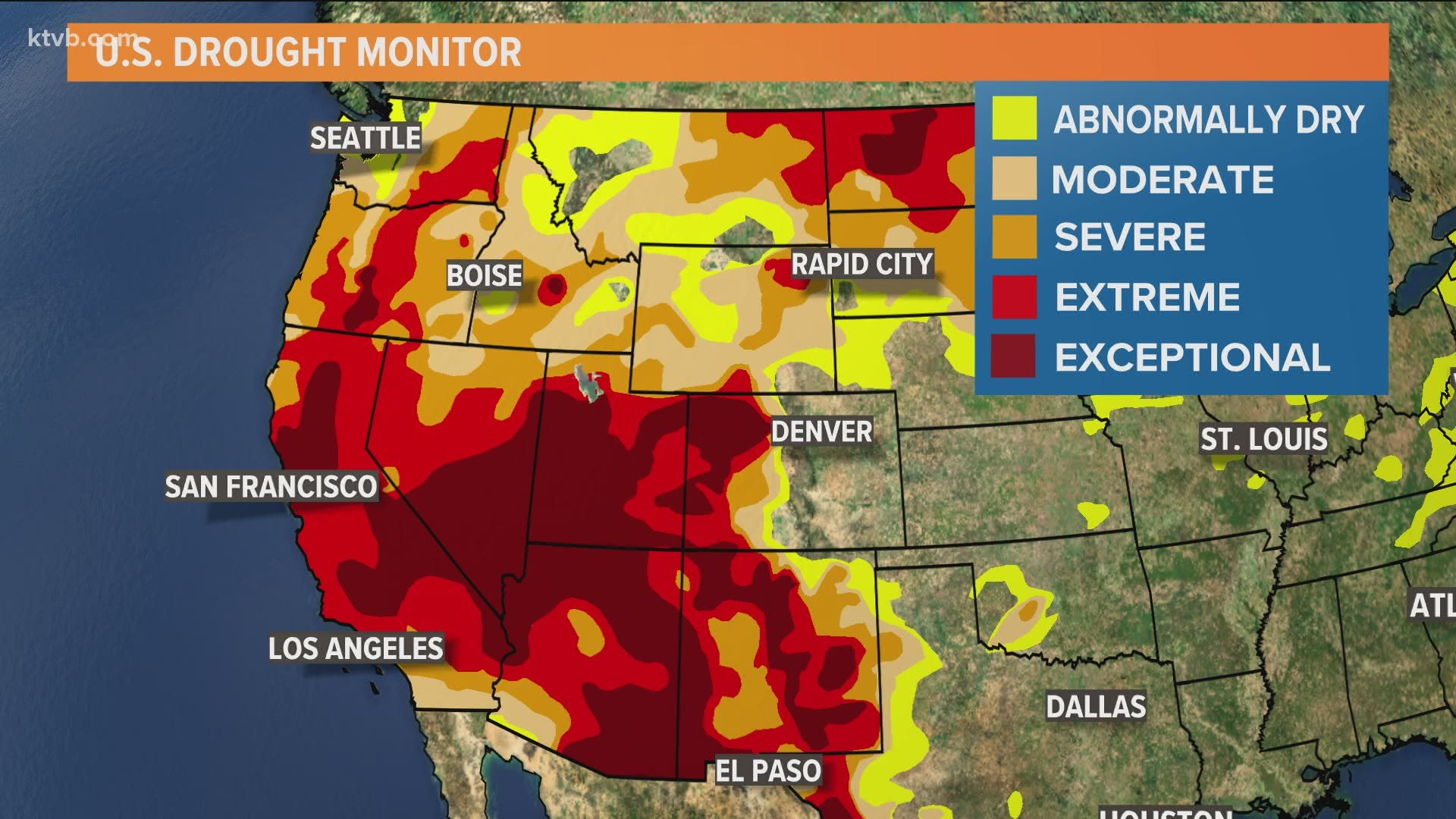 BOISE, Idaho — It's abnormally dry all over Idaho in these final days of spring, but the impact of below-normal snow and rain, followed by early snowpack melt, is making the situation much more severe in some parts of the state than others.

Water levels at the reservoirs that feed the Boise River are at, or near average right now - a casual look at Lucky Peak Reservoir, for example, would not suggest anything severe.

In fact, Lucky Peak was 96-percent full as of Monday, according to the U.S. Bureau of Reclamation. But that apparent abundance of water won't last forever. Anderson Ranch and Arrowrock - the two reservoirs that drain into Lucky Peak - are only 68- and 60-percent full, respectively, and the snowpack that feeds them has already melted away.

The situation is much more severe on Central Idaho's Big Wood River -- where irrigation water has already been shut off. In a typical year, the gates would stay open into October.

RELATED: Areas of Idaho can expect a shorter irrigation season this summer

Those are a couple examples of real-world effects of extreme drought on farms and fisheries -- the livelihoods of many Idahoans, and sources of food for many more.

Less water also increases the risk of wildfires on Idaho's forests and rangelands. It reduces hydroelectric power generation, leading utility companies to raise your rates and/or purchase power from other sources.

The National Integrated Drought Information System (NIDIS) has a five-level rating system for drought conditions -- ranging from "abnormally dry" (D0; indicated in yellow) to "exceptional drought" (D4; indicated in very dark red/maroon). After yellow, the darker the shade of red, the more severe the drought situation is.

Ada County, the westernmost portion of Elmore County, and part of northern Owyhee County are at D0. Elsewhere in and adjacent to the Treasure Valley, most of Canyon, Gem, Owyhee and Payette counties are at D1, or "moderate" drought.

Blaine and Custer counties are at D4, the most severe level.

The last time any part of Idaho experienced level-D4 drought was a period that included parts of 2003 through 2005, according to the U.S. Drought Monitor's timeline of historical conditions. A look at the drought map from the week of June 15, 2004, shows the southernmost areas of Idaho were in severe or extreme drought, and much of East Idaho was in exceptional drought.

This year, as of May 27, 79.9 percent of Idaho is in some form of drought ranging from moderate to exceptional. Drought is severe or worse in 34.4 percent of the state, but the area in the "exceptional" category makes up less than four percent.

In areas with "exceptional drought," the NIDIS says, fire danger is high, trees are stressed and threatened by insect infestation, fish and wildlife populations decrease, habitats are degraded, and hydropower generation is affected.

At the "severe drought" level, river levels are very low, crops may go unharvested, and irrigation water allotments may be severely curtailed.

Fire risk is elevated and wildfires may spread quickly even at the "moderate drought" level.

Impacts to be expected at D0 - "abnormally dry" - include higher demand for irrigation, lower snowpack, and later openings at ski areas.

Drought picture: where it's most severe in Idaho and the West; the outlook for rain