The Ocosta School District has now carried out its first tsunami drill for about 750 students and staff on the roof of its new school. 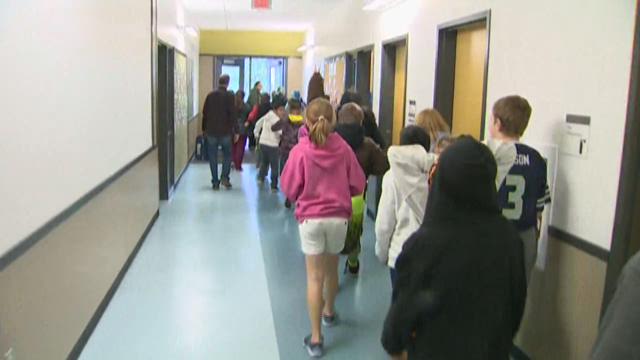 WESTPORT, Wash. – It's considered the first building of its kind in North America, a building that provides safe refuge from a tsunami.

The Ocosta School District has now carried out its first drill for about 750 students and staff on the roof of its new school.

It's not any roof. This roof and the surrounding walls to keep people from falling off is designed to withstand tsunami waves that would be carrying with it battering rams made of other buildings, vehicles, logs and other floating debris. Some of the walls on the west side toward the Pacific Ocean are designed to break away relieving pressure on the structure.

Ocosta is a small school district – both its elementary and high schools are on the same piece of land just south of Westport, Washington.

The district made the case it needed a new elementary school to replace an older structure, and broke ground in 2014. $2 million of the $13.8 million bond issue would add both the structural strength and access points for the structure.

Heather Sweet, who was principal at the time, said voters approved it by 69 percent.

When you look at it, you see a nice looking modern school, but if you look closer, you see that certain emergency doors have their push bars facing outward. That will allow people from the community, as well as the school, to easily enter the building at all four corners and make their way up wide stairwells to the top some 53 feet in the air. This is well above potential tsunami waves of 30 feet or more.

Chuck Wallace, deputy director for Grays Harbor Emergency Management, was deeply involved in the Ocosta school project. He has received at least 50 inquiries from other communities and government agencies around the world wanting more information on vertical evacuation.

On the lower level is a cafeteria and gym, which are not designed for nor expected to survive the rushing water. But the heavily reinforced concrete and rebar columns, strong beams across the top, and 50 foot deep pilings are expected to make the structure tsunami proof for the people riding it out on the roof. The roof is designed to handle 2,000 people or more.

In June, as part of the statewide earthquake drill known as Cascade Rising, a demonstration was performed lifting a person off the roof into a military helicopter. Extraction by air is one reason the roof is open to the sky.

A magnitude 9 earthquake along what geologists call the Cascadia Subduction Zone has left evidence of tsunamis in the geological record. Geologists believe the last one occurred in January 1700, more than 300 years ago, and believe we are in the window where the next one could happen. A tsunami generating earthquake, which is feared, would swamp Westport and other low lying communities. When it will happen is not known.