'To be the biggest, the best, to be the Alabama of eSports': Boise State eSports team has big ambitions

Some consider video games a hobby, many more a waste of time. But in just two years' time, BSU is at the forefront of the fastest-growing programs in the country. 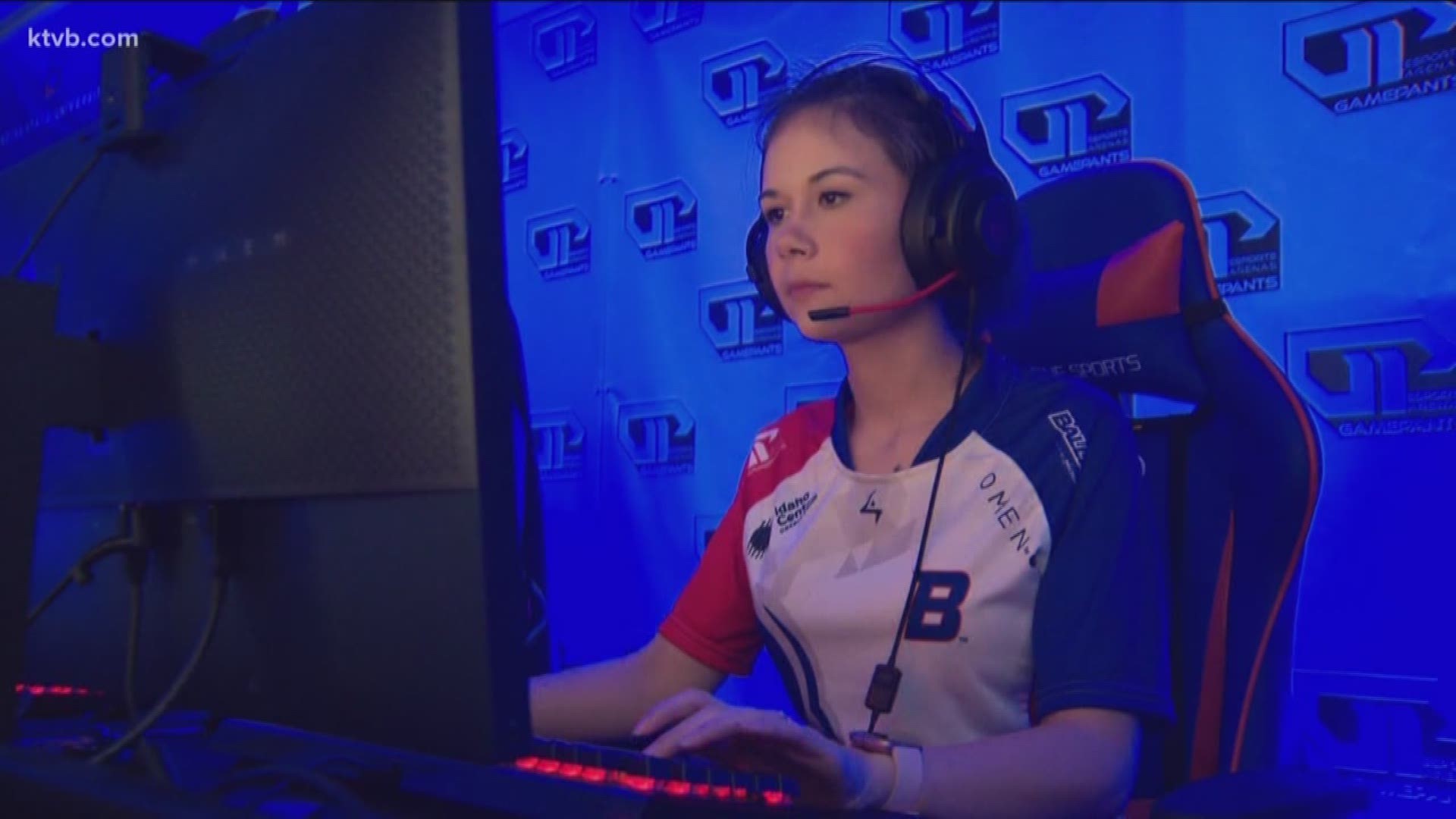 BOISE, Idaho — It's flashy, full blast, and fan-friendly. It's also fast-paced and sometimes hard-to-follow with so many moving parts.

These are all are good descriptions of sports at Boise State University, even those that are played in padded chairs.

This is Boise State eSports.

Like basketball or football or any other varsity sport, they play as a team, they compete against other colleges, they have their own broadcast team they call "casters," and they have a faction of fans and family that fill any empty space in the GamePants arena.

"We don't even know which one my son is really," Darin Strickler, who is trying to follow the action on a big video screen in front of him, said.

So yeah, it's pretty much the same scene, just a different diversion.

That's a bold statement but not necessarily an overstatement.

RELATED: Are esports the next major league sport?

Just like other sports game-day performance is a product of practice, which they do on a second-floor classroom on campus that is stocked with computers where the team's 65 players can sharpen their skills, sometimes like it's a full-time job.

Only 20 of those hours are spent here since, just like other varsity sports, instruction time is limited.

What hasn't been limited is the progress of the program.

"It's pretty crazy how much it's grown in the past few years," Trevor Lutz, a junior who was one of the original team members, said.

In 2016 Doc Haskell was doing some research on gaming.

"And I discovered very quickly that eSports was about to explode," he said. "And that we had this kind of generational opportunity to be the first."

That September two dozen student-athletes showed up and showed an interest in getting a gaming-team going.

"'You're going to school for gaming?!'" senior Madisyn Benge mimicking what her family says when she tells them what she's doing at Boise State. "'What? How do you do that?!'"

Madisyn, or N3rdybird as she's known on the screen was also one of the originals. At that time there were only seven other varsity eSports teams across the country.

Today there are more than 170 member-schools in the National Association of Collegiate eSports.

So how do the Broncos fit into that field?

"We're really good at some of these games," Dr. Haskell admits.

Let's put it this way, no other Boise State program - in any sport - has gone from formation to domination in such a short time.

"We have the most wins of any collegiate program right now," Dr. Haskell said.

"We've played more games, we have the biggest broadcasting program associated with our eSports program," DR. Haskell continued. "We had the first female team captain in collegiate eSports, any year we're probably the third most-watched program on campus."

They are the second most viewed eSports program for college eSports on Twitch with more than 200,000 unique viewers.

And they are ranked top-10 in all four games they play, including Rocket League.

"Car soccer with rockets," Joe laughs while explaining the game. "That's about it."

They also play League of Legends, Hearthstone, and Overwatch, which is a bit more complicated.

"I have no clue what's going on," Darin, who is trying to watch his son, Garrett Strickler, play for the fourth time, said.

Credit: KTVB
Darin tries to explain what is going on while his son, Garrett Strickler, plays for the Boise State eSports program.

"After all the years of me telling him not to play games he's up here playing in college," he said. "So, it's good."

And soon his son could be playing games on a scholarship, just like any other athlete.

Something the professor-turned-coach Dr. Haskell sees as the next step to making going to school and getting a degree more attractive to the next generation.

"To let them keep doing the thing that they're really good at for the university," he explained. "In the process of becoming the next version of themselves. That's collegiate athletics."

So is it sports? That's debatable. What isn't, the fact that eSports aren't going anywhere and is likely going to get more popular.

I guess that makes it just like any other game.

Dr. Haskell expects eSports will eclipse football when it comes to collegiate participation simply because of cost.

He says he still can't believe he gets to sit in living rooms and recruit kids to play video games for the Broncos.

Again, Doc Haskell emphasizes, BSU eSports are a major incentive for Idaho kids to get a college degree.

With a major sponsorship deal in the works, Dr. Haskell says they plan to start offering full-ride scholarships as soon as spring of 2020.

TRENDING: 'This is the marijuana capital of Idaho': Pot sales bring cash infusion to Ontario