The Next Knight? Katie Davis is well on her way

Born and raised in Boise, 16-year-old hockey player Katie Davis discovered her passion for the puck at a very early age, much like her idol. 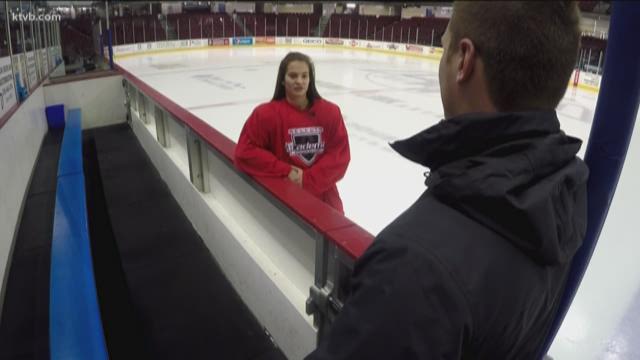 The ability to dream can be viewed as the foundation of almost any Olympian's career.

For U.S. women's hockey star Hilary Knight, she can easily recall the moment she started to believe that anything is possible.

"I remember in 1998 when those women brought home a gold medal and how ecstatic the United States was," Knight said. "The '98 medal allowed me to say, 'Okay, I can do that too.'"

"I turned to my grandma when I was five and was like, 'I'm going to be in the Olympics,'" continued Knight, who is now a three-time Olympian. "There was never a doubt it my mind I was going to be an Olympian."

Twenty-three-years after that conversation with her grandma, Knight set out to complete her own dreams, and inspire kids to start chasing theirs, at the 2018 Winter Olympics.

"If we can bring back a gold and continue to develop to the grass-roots program and inspire the next generation, then we'll succeed," said Knight, before leaving for PyeongChang - where she and Team USA won the gold this week after defeating bitter rivals Canada.

Little does she know, that process has already started, and Idaho's next Hilary Knight is well on her way.

Born and raised in Boise, 16-year-old hockey player Katie Davis discovered her passion for the puck at a very early age, much like her idol.

"I have two older brothers. They started playing before me and I wanted to be better than them," Davis recalled. "I mean, I love the game, and I think that it's really important to follow your dreams."

The biggest obstacle for Katie is the one Knight is currently trying to solve. A lack of common competition her in Idaho stood between Katie and her own gold medal goal. So two years ago, when she was just 14 years old, Katie packed up and move across the country to do just that.

"The area that I live in, it's not a traditional sport," explained Davis about why she moved. "I go to a boarding school in Rochester, New York (now). I'm on the U-16 team there. We're a showcase team, so travel all around."

"That's a really good question," said Davis with a laughed when asked how her lifestyle differs from most girls her age. "It starts with that I don't live at home with my parents. I moved out when I was 14."

It was a brave decision by Katie, and a difficult goodbye for mom.

"We miss her every day," said Patty Davis. "She's absolutely amazing in her dedication, and that helps us know that she's in the right place. It's been fun to watch her so far."

So, how good is Davis?

There are currently 33 Division I women's hockey programs in the United States. By the time Katie started her sophomore year of high school this past fall, she had already visited almost half of them.

"RPI and Penn State were the first two schools I visited," said Davis, "I visited Ohio State, I went to Yale, I went to the University of Vermont. It was definitely really cool to see the variety."

One stood out above the rest though, because of what it offered her both on and off the ice.

"So, I'm verbally committed to Harvard," Davis proudly stated. "There's a lot of people that have gone through Harvard's hockey team that I've looked up to. You can see that it's produced really great people."

In the meantime, Katie has her sights set on making another hockey team.

"I definitely think it has to do with USA hockey. There's a U-18 national team that I want to be a part of."

It's the same squad that Hilary Knight once use as her stepping stone to the U.S. National Team.

"A ton," Davis quickly replying when asked how much Hilary Knight inspires her. "It's crazy just to think that I'm from somewhere like her."

What might be an even crazier thought, is that by the time the next Olympics roll around in 2022, Katie will be 20 years old, the same age Knight was when she made her Olympic debut back in 2010.

"[Knight] is definitely one of the world's best players right now," said Davis with a smile, "I could end up playing with her. That would be crazy."

Talk about a miracle on ice.