During the regional final between Minnesota Duluth and North Dakota, he scored the game-winning goal in the game’s fifth overtime. 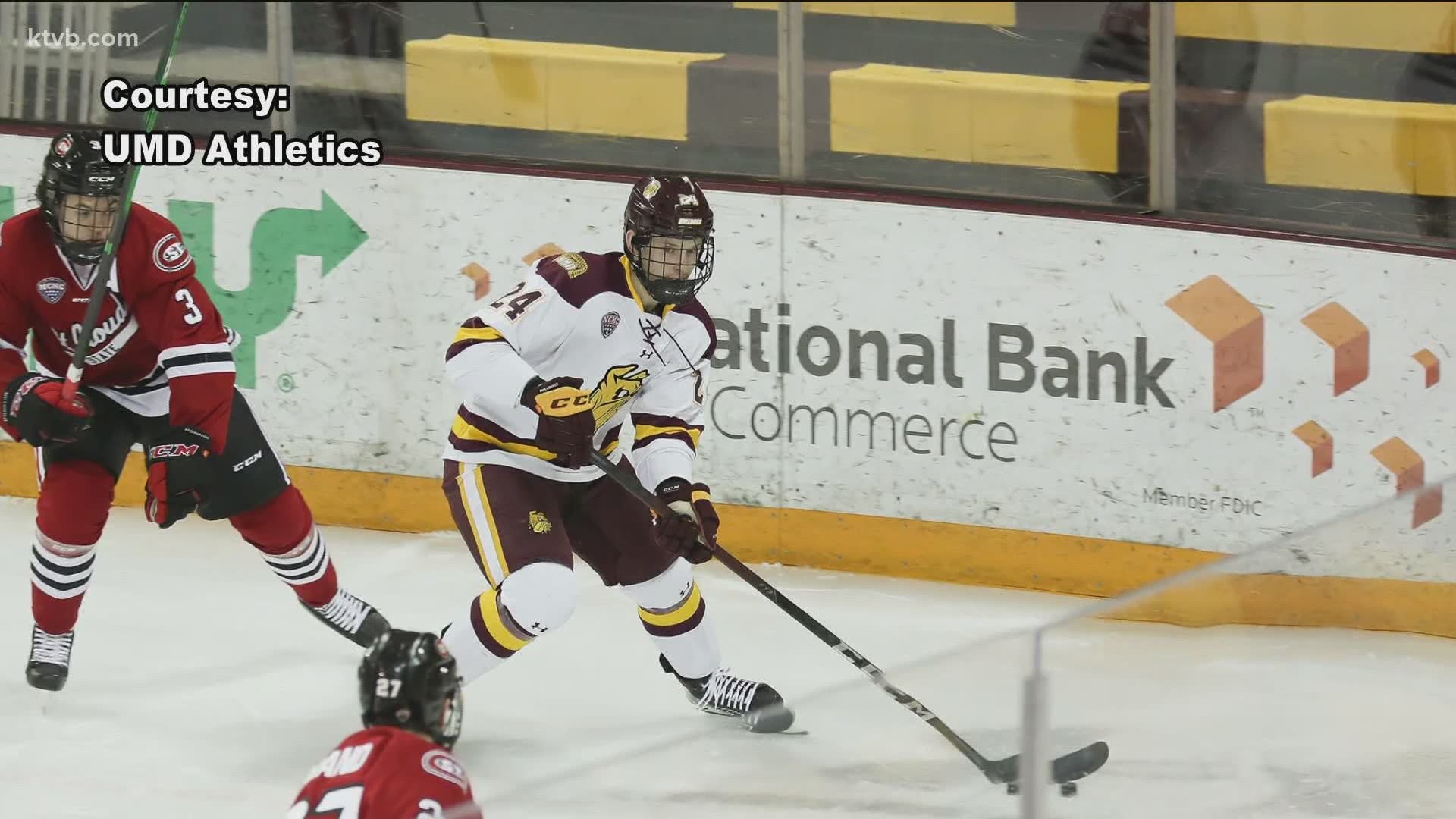 BOISE, Idaho — The son of former Idaho Steelheads captain Jeremy Mylymok is now one game away from playing in the NCAA men's hockey championship. A former player for the Idaho Junior Steelheads will now face the University of Massachusetts in the Frozen Four, the hockey version of the Final Four, on Thursday night.

Luke Mylymok is a freshman for the Minnesota Duluth Bulldogs and grew up in Boise while his dad played for the Steelheads. Jeremy Mylymok's all-time great Steelheads career included being a former captain, ECHL champion and his jersey was retired in the rafters of Idaho Central Credit Union Arena

He recently scored a historic goal to help the Bulldogs advance to the Frozen Four. During the regional final between Minnesota Duluth and North Dakota, he scored the game-winning goal in the game’s fifth overtime. The matchup is now the longest college hockey game of all time.

The freshman has appeared in 11 games this season for UMD, registering 2 goals and 2 assists so far this season.

Editor's Note: The interview below has been edited for grammar and clarity.

Will Hall: Luke, what's it mean to you to represent Boise on the biggest stage in college hockey?

"It's awesome, grew up in Boise, my dad played hockey there and that's where I was born. Boise wasn't a really big hockey town when I was there, but through the years it's grown as a huge hockey town, so to be able to put Boise on the map so to speak is pretty special," said Minnesota Duluth forward Luke Mylymok.

Hall: You scored the game-winning goal in the college hockey's longest game of all time, five overtimes, when you saw the puck go in, what was going through your mind?

"I was like, no way. I looked up at my linemate, Blake Biondi and he was screaming and I was like, are you kidding me right now? Just seeing all the guys jump off the bench was awesome as well," said Mylymok.

Hall: How exhausting was that game?

"My roommate, Zach Stejskal, he was just dead. He had IV's in him after the game, almost collapsed. It was crazy, guys were unbelievably bagged. It was a marathon of a game, and to reach the frozen four after a game like that, just puts icing on the cake," said Mylymok.

Hall: What do you remember most about watching your dad with the Steelheads?

"I was pretty young when he was a Steelhead, but I remember going to the rink with my older brother Conor and being a hassle to my Mom, running around the rink while she was trying to watch the game. Was there when he got his jersey up in the rafters, so that was a special moment, too. We had all his old teammates and all his new teammates there to support him and I think that's the biggest memory I have of being at the old Quest Arena there watching my Dad play," said Mylymok.

Hall: Luke, you grew up playing for the Idaho Junior Steelheads, what do you remember about those days?

"The whole time was awesome. Some of those guys are my best friends to this day. Guys like Jon Jisko and Cam Gallagher and I still talk to those guys to this day. We got to go to some pretty cool places as a squirt team. That was definitely a really cool experience and those are days I look back on and reflect," said Mylymok.

Luke and the Bulldogs play Thursday night at 7:00 p.m. MT on ESPN2.