These are the Idaho athletes we will be following closely in PyeongChang this February. 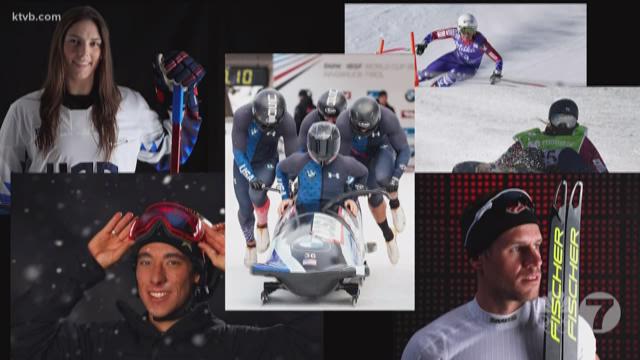 The 2018 U.S. Olympic Team roster is officially set with 242 athletes, the largest contingency of any country competing at the Olympics and, once again, Team Idaho has a deep and talented roster.

These are the seven athletes that we will be following closely in PyeongChang this February.

Following a decorated career as a sprinter in college, the former Boise State Bronco bought himself a plane ticket to Lake Placid, New York, to give the sport of bobsledding a try. The experience has turned into a decade-long run as one of the best bobsledders in the world. The only achievement that Cunningham has yet to accomplish is an Olympic medal, something he believes he has positioned himself to claim in PyeongChang.

RESULTS: Cunningham bounces back in Run 3, but fails to advance in 2-man bobsled

MAMMOTH, CA - JANUARY 20: Ben Ferguson looks on after finishing in second place in the final round of the Men's Snowboard Halfpipe during the Toyota U.S. Grand Prix on January 20, 2018 in Mammoth, California. (Photo by Sean M. Haffey/Getty Images)

Ben Ferguson was born in Boise and still has family there, including his grandparents. His family moved to Bend, Oregon and he began snowboarding at Mt. Bachelor when he was 6 years old. Ben has two younger brothers, one of whom is also on the U.S. Snowboarding team. His hobbies include fly fishing, mountain biking, skateboarding, surfing, painting and drawing.

The one-time member of the Sun Valley Ski Team is getting set to make his third, and potentially his last, trip to the Olympics. Hamilton has had a highly decorated career in his sport, but an Olympic medal has eluded him to this point. Once again, Hamilton is one of the strongest members of the Team USA Cross-Country Ski Team. As he approaches the next chapter of his career, there would be no better way to finish off this impressive chapter than with a medal.

Jenson has been at or near the top of her sport for over four years now. At the 2014 Games in Sochi, she missed qualifying for the slopestyle finals by one spot. Jenson earned the discretionary pick for the slopestyle team and is up against some pretty big competition, but she does have a number of Top 10 World Cup finishes in her career, and much like Kaitlyn Farrington in 2014, is only one good ride away.

Immediately following the 2014 Winter Games, plenty of people pegged a then 18-year-old Josey as an up-and-comer. The Hailey-native lived up to the hype, making his first Olympic team this year. Josey is known for pushing the limit with his tricks, maneuvers that are usually accompanied by a high degree of difficulty. At just 22 years old, Josey is the second youngest member of Team Idaho.

360 VIDEO: Bomb down Baldy with Olympian Chase Josey as he describes what helps keep him level and focused before the biggest competition of his life.

Knight has established herself as one of the premier faces of the U.S. Women's Hockey team. When she made her first Olympic team back in 2010, Knight was the youngest player on the on the women's roster. Now, not only is she one of the most experienced players heading to Pyeongchang, but she is also a team captain.

RESULTS: Team USA continues to struggle against Team Canada at the Olympics

Over the last four years, Michener has emerged as one of the best breakman in the world. Michener, who ran track at the University of Idaho, will team up in the 4-man bobsled race along with Nick Cunningham, a Boise State alumnus. This will be Michener's first-ever Olympic Team.

Caitlyn Patterson and her brother, Scott Patterson, were both born in McCall and spent their early years there before the family moved to Alaska. The 2018 Pyeongchang games will be the first Olympic experience for both siblings. Caitlyn's hobbies include photography, hiking and running up mountains, mandolin, violin and architecture.

Scott Patterson and his sister, Caitlyn Patterson, were both born in McCall and spent their early years there before the family moved to Alaska. The 2018 Pyeongchang games will be the first Olympic experience for both siblings. Scott's hobbies include running, backcountry skiing, climbing and rafting.