He is the first American man to medal in the event. 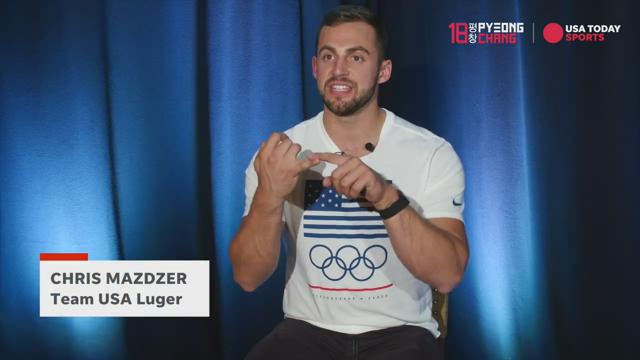 Chris Mazdzer set U.S. Olympic history Sunday by finishing second in the luge men’s singles competition, becoming the first American man to medal in an event that made its Winter Games debut in 1964.

Mazdzer put himself into position for the medal on his third run, moving up from fourth to second and setting a track record.

David Gleirscher of Austria, who passed Mazdzer on his final run, took gold, and Johannes Ludwig of Germany took bronze. Gleirscher's win was Austria’s first in men’s luge in 50 years.

In a shocking development, two-time defending champion Felix Loch of Germany made a crucial mistake on his final run and ended up fifth after leading through three rounds.

Mazdzer, a 29-year-old native of Lake Placid, N.Y., was a surprise contender after the first two runs of competition, held here Saturday, entering the final rounds in fourth, one-tenth of a second out of third.

The surprise stemmed from a subpar performance this past World Cup season, which saw a top finish of sixth place. Once ranked No. 3 in the world as recently as the 2015-16 season, Mazdzer hadn’t medaled since — until the Pyeonchang Games.

“It wasn’t my year, but that’s the best thing about the Olympics,” Mazdzer said Saturday. “You really put all your focus and everything into right now.

Long itself an underdog — if not an outright underachiever — USA Luge now has its first medal on the men’s side, joining five previous medals won either in doubles competition or in women’s singles. The USA claimed silver and bronze in doubles at the 1998 Nagano Games and the 2002 Salt Lake City Games, and Erin Hamlin claimed bronze four years ago in Sochi to become the first woman to medal.