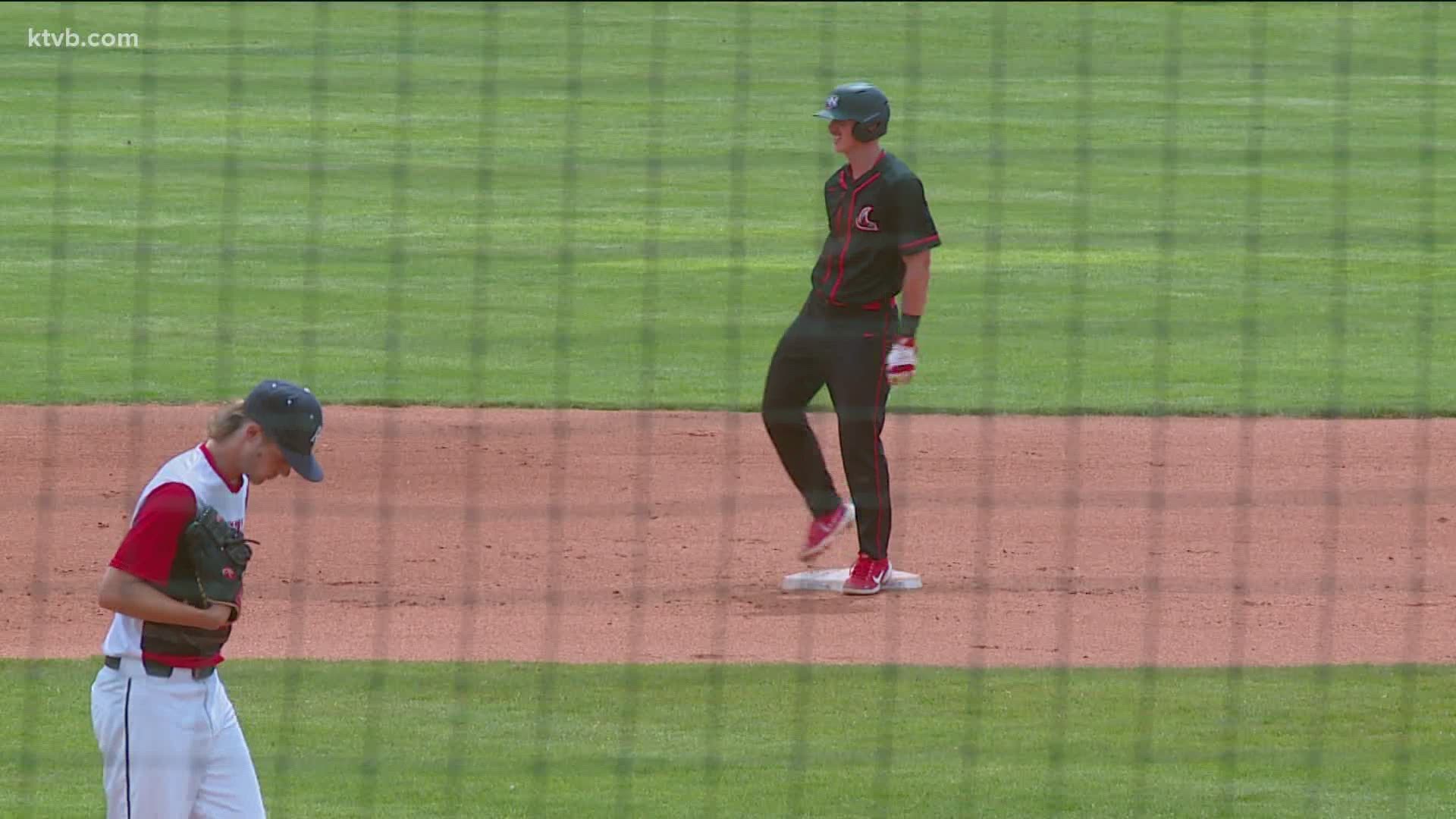 NAMPA, Idaho — It's been a season of firsts for the 15th-ranked Northwest Nazarene baseball team.

NNU was forced to play the Cougars after dropping a 2-1 heartbreaker against Western Oregon (21-6) earlier in the day. The Nighthawks took a 1-0 lead in the fifth inning when junior outfielder Alex Salsman plated junior second baseman Colton Moore with a single to left.

Freshman starting pitcher Kyle Ethridge managed to keep the Wolves' bats at bay, scattering four hits and striking out 12 over 8.0 innings of work. He was pulled after walking the first batter in the top of the ninth. That runner eventually scored on a throwing error by freshman shortstop Walker Moore, then later in the inning, junior closer Max Holtzclaw, who struggled with his commanded, issued a bases-loaded walk that forced in the go-ahead run.

"It was such a tough loss in that first one thinking we kind of had that thing and then having to rebound and play with your back against the wall in that next game against one of the best teams in the country, it was pretty tough," NNU head coach Joe Schaefer recalled.

Tough one for @NNUBaseball in Game 1 of the NCAA DII West Regional...

The game got way from NNU in the 9th. An error allowed the tying run to score and a walk pushed the go-ahead across. pic.twitter.com/SUSxUvMzCr

The Nighthawks (32-8) had 45 minutes to recover before playing Azusa Pacific (33-9) with their record-setting season on the line.

NNU wasted no time getting on the scoreboard against the Cougars. Senior third baseman Shawn Grandmont singled with two outs in the top of the first, then freshman right fielder Grant Kerry laced a run-scoring double to centerfield to make it 1-0. Senior Ben Johnson barely missed a two-run home run in the following at-bat, instead of settling for an RBI-double on a ball that hit halfway up the wall in right-center.

🔽4th | NNU 2, APU 1@GRANDY12_ singled with two outs in the top of the first, then @GrantKerry33 followed with a RBI-double to CF.@NNUBaseball needs a win in order to extend their historic season.

More highlights tonight at 6 and 10 on @KTVB! pic.twitter.com/U86Wjca4Oj

Azusa Pacific rallied back to tie that game at two in the fourth, but junior catcher Cody Nisbet quickly responded with a solo home run, his first of the season, in the top of the fifth to put the Nighthawks back in front.

That was more than enough breathing room for starting pitcher Sasha Jabusch. The senior southpaw tossed his first complete game of the season and tied a career-high with 10 strikeouts while limiting a normally potent Azusa Pacific offense to just five hits and two runs.

"That was not just the best outing of the year for him, but for just about anybody I've seen against us all year. He was outstanding. He was just efficient," Schaefer said. "He's got swing-and-miss stuff, but he wasn't typically a guy that was able to go real real deep into games for us.

"So to come out and go nine innings with no walks and still rack up 10 [strikeouts]," Schafer added, "that was huge. And he was just as good in the ninth as he was in the first. It was pretty impressive."

HUGE WIN for the @NNUBaseball team!

Senior LHP Sasha Jabusch was straight SHOVIN' today against one of the better lineups in the country...

More highlights and reaction tonight at 10 on @KTVB! pic.twitter.com/9SIWgNFibT

On To Day Two

NNU will now play Western Oregon again on Friday at 3:30 p.m. in Nampa. If the Nighthawks win, they will play again on Saturday at noon against a yet-to-be-determined opponent with an automatic berth to the NCAA DII College World Series on the line.

Yet another potential "first" the Nighthawks could add to the list this season.

"We usually play pretty well with our backs against the wall," Schaefer told KTVB. "Now we're fighting for our lives the rest of the way, knowing all we've got to do is win two more games over the next two games, I think it's very doable."

The @NNUBaseball team has relied on its offense all season, but today its starting pitchers carried them.

Joe Schaefer, head coach: "We usually play pretty well with our backs against the wall." pic.twitter.com/EwoZZ2r3hu