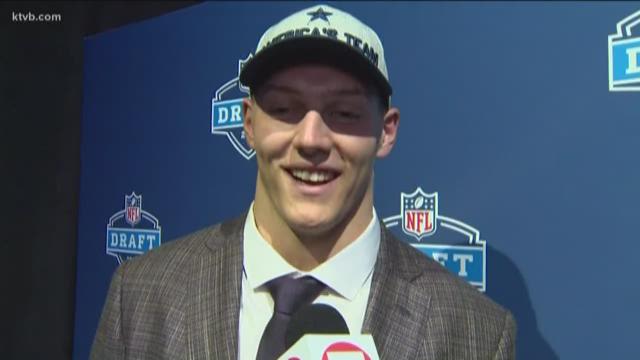 Vander Esch was the 19th overall pick in the first round of the 2018 NFL Draft.

1 / 13
Tom Pennington
ARLINGTON, TX - APRIL 26: Leighton Vander Esch of Boise State poses after being picked #19 overall by the Dallas Cowboys during the first round of the 2018 NFL Draft at AT&amp;T Stadium on April 26, 2018 in Arlington, Texas.

In front of the hometown crowd at AT&T Stadium in Arlington, Texas, Leighton was welcomed on stage by NFL Commissioner Roger Goodell.

"That was the longest hour, hour and a half of my life!" Vander Esch said at the Cowboys' press conference after he was drafted. "And then when I got that call from Dallas, it was like, nothing better."

Leighton says he was able to talk with Dallas Cowboys owner Jerry Jones and head coach Jason Garrett on the phone prior to the announcement.

"I'm so excited to get going, I don't think it can get any better," Vander Esch added. "This is where I want to be my whole time."

During that same press conference, Leighton answered questions about his rumored injuries.

"There's nothing to worry about. I'm completely and totally healthy," he said. "I don't know where any of that stuff came from. I'm good to go and I'm ready to play football."

Vander Esch began his career as a walk-on at Boise State, but he's leaving as a first-round NFL Draft Pick.

Today, his 40-time to 4.65 seconds despite gaining 41 pounds. His calculated one-rep power clean max jumped 100 pounds as well, as he saw his vertical rise from 31 inches in that first year of college all the way to 39.5 inches at the NFL Combine earlier this month.

Leighton joins the likes of Kellen Moore, Tyrone Crawford, Demarcus Lawrence and Orlando Scandrick, all of whom either currently play or played for the Cowboys.

Boise State has four all-time first-round draft picks. However, the Broncos haven't had one since both Doug Martin and Shea McClellin were selected in Round 1 in 2012.