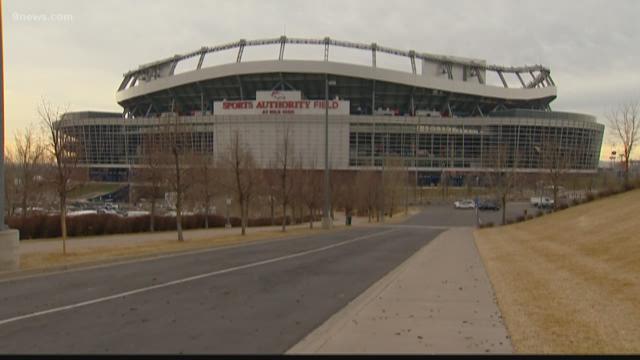 If you’ve read enough stories by 9NEWS Denver Broncos Insider Mike Klis, you probably know that at this point, where the Broncos play is known as “soon-to-be-renamed Sports Authority Field.”

It’s not the most catchy sounding name, for sure – and with the signs officially gone, it’s due for a change.

Former Denver mayor Wellington Webb wants that name to be restored to Mile High Stadium … and he wants fans, businesses and even the marijuana industry to chip in to make it happen.

But the Broncos say not so fast.

Webb's suggestion is not being considered, according to spokesperson Patrick Smyth.

"Our focus remains on securing a long-term, corporate naming rights partner and we continue to have productive conversations with prospective companies," Smyth wrote in an email to 9NEWS.

PHOTOS: The Sports Authority sign at Mile High is coming down

1 / 23
The sign is coming down! Crews are dismantling the Sports Authority signage outside Mile High.

Webb announced his plan to media on Tuesday, and wrote a letter detailing the specifics of the plan.

The Broncos are paying the $19 million left on the original $120 million naming rights deal, which used to be the burden of the now defunct Sports Authority and Invesco, which went bankrupt, before that.

They’re hoping another naming rights partner will pick up the slack. The money from this deal supports maintenance at the stadium.

Webb, however, says he believes there’s a different way – that fans with deep pockets can pay up to maintain the Mile High Stadium name, as well as businesses. In his letter, he equated the process with buying shares in a company.

Of course, Webb says he knows raising the $650 million in stadium improvements wanted over the next 20 years is no easy task.

“… so when I say we need deep pockets, I would include our marijuana industry,” he wrote. “The NFL would never allow pot signs to be televised, so auction off signs for the 76,125 folding seat bottoms and other locations not televised.

“I’m sure some savvy marketing people could find a way to make this work.”

Webb argued that this approach to funding stadium improvements would be less risky of an investment that relying solely on a single corporate sponsor.

“I have always believed strongly that the ‘Mile High Stadium’ name is the best PR and advertising for the city, state and the Broncos,” Webb wrote.

His letter ended with a suggestion to use the name “Bowlen field” as a secondary reference in honor of Pat Bowlen and his family.

Read more the full letter below:

Webb was Denver's 42nd mayor, serving from 1991 to 2003. His political career spans back to 1972, when he was elected to the Colorado House of Representatives, serving northeast Denver.

Mile High Stadium opened in 2001, during Webb's term, and was largely paid for by taxpayers.

RELATED | Mile High, you looks good - won't you back that S up?