Boise State's Brett Rypien passed for 380 yards and three touchdowns but was sacked seven times and pressured throughout the day. 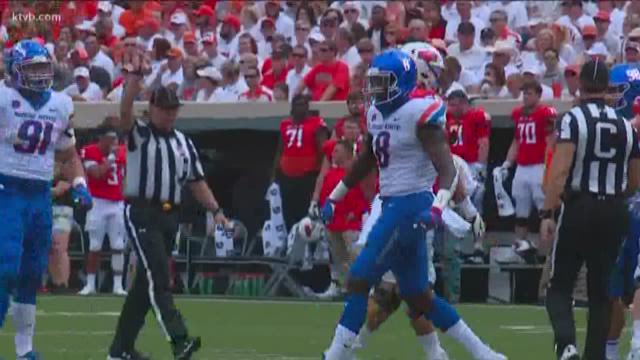 Stillwater, Okla. — Taylor Cornelius ran for two touchdowns and passed for another to help No. 24 Oklahoma State beat No. 17 Boise State 44-21 on Saturday.

Justice Hill ran for 123 yards and a touchdown, and Tylan Wallace had five catches for 105 yards for the Cowboys (3-0). It was one of the most important nonconference wins in Mike Gundy's 14-year tenure as coach.

Boise State's Brett Rypien passed for 380 yards and three touchdowns but was sacked seven times and pressured throughout the day. Jordan Brailford had three sacks, Jarrell Owens had two and Devin Harper had 1.5. Oklahoma State held the Broncos (2-1) to 34 yards rushing on 31 attempts.

A blocked punt by Oklahoma State's Amen Ogbongbemiga led to a 1-yard touchdown run by Cornelius that gave the Cowboys a 14-7 lead. Oklahoma State led 17-7 at halftime.

In the third quarter, Oklahoma State's Jarrick Bernard blocked another punt, and Za'Carrius Green scored on the return to push the Cowboys' lead to 34-14.

Rypien's 5-yard touchdown pass to Chase Blakley on fourth down cut Oklahoma State lead to 34-21 late in the third quarter, but the Cowboys maintained control. Cornelius closed the scoring on a 6-yard touchdown run on which several of his teammates ganged up and pushed him over the goal line.

Boise State: Rypien can only take the Broncos so far if he doesn't have time to throw. His quick release saved him from disaster numerous times, but the Cowboys still got to him too often and his running game was no help.

Oklahoma State: The Cowboys usually have to depend on their offense to win games, but they showed they can change the game on defense and special teams, too.

Oklahoma State handled a ranked non-conference opponent with a strong reputation and should make a significant leap in the Top 25. Boise State shouldn't fall too much with a road loss to a ranked Big 12 team.