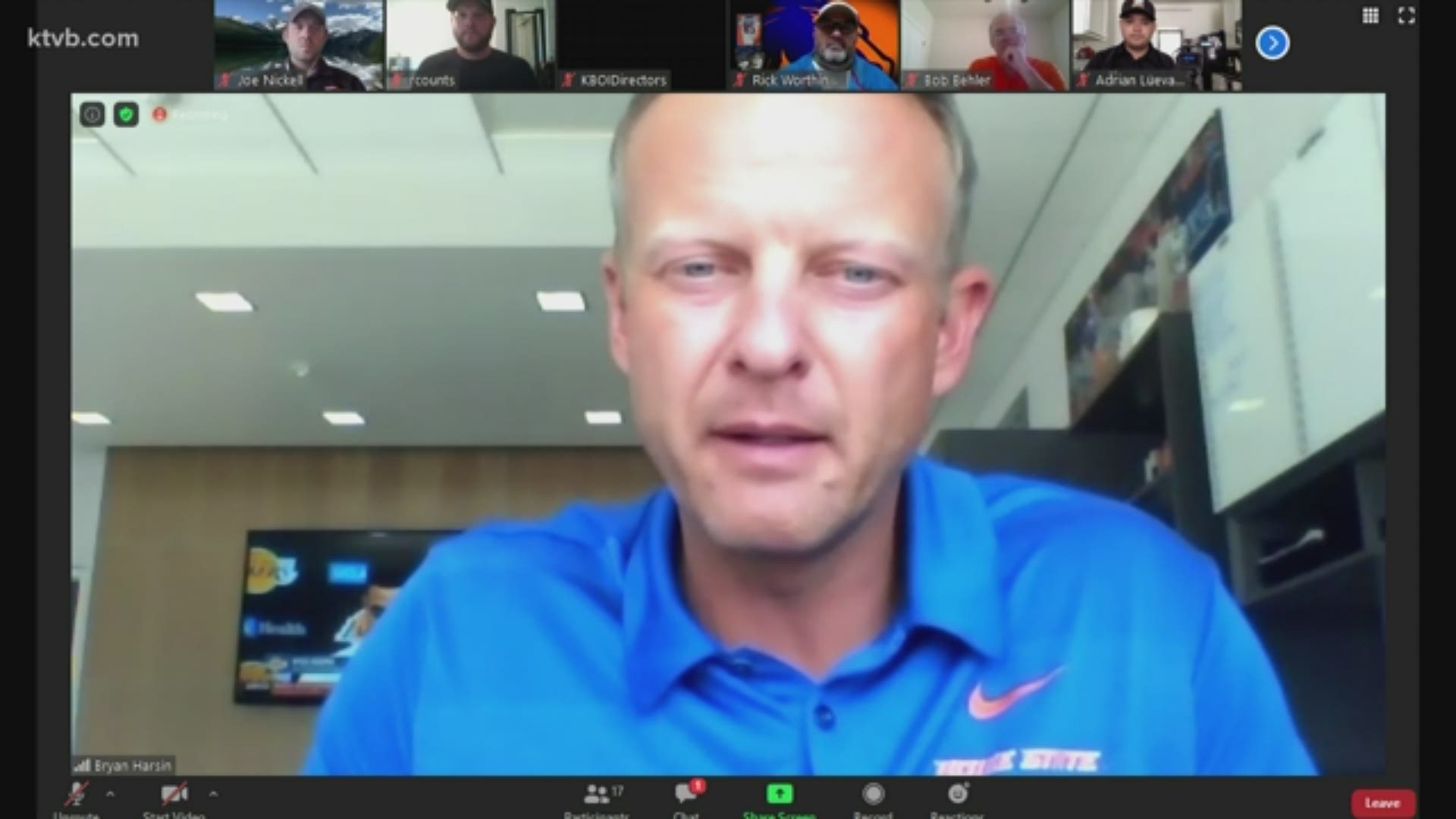 BOISE, Idaho — The Boise State Broncos' 2020 season was postponed after the Mountain West Conference canceled all fall sports on Monday.

Head football coach Bryan Harsin said when the news broke on Monday afternoon, he held a team meeting about the suspended season. He told everyone what happened and was open and honest about the unprecedented situation. He also allowed the players to process the news in their own ways.

"And then, you know, let everybody kind of process it in their own way. That's, that's just how you do it because there's really no one way to process this, there's not like a 'Boise State way of how we're going to process it.' Every single guy has to take a minute and just figure out, 'All right, how does this apply to me?'" he said.

So what does a delayed season mean for the players and staff, the university, and Bronco Nation?

After this week wraps up, the players will have a few weeks off before school starts and Harsin said he hopes his team will stay on campus to continue working out on their own.

"At this point as far as how do I feel about them being in a facility I feel like this is the best place for these guys to be," he said. "If you're going to work out and train, we want them to do it here at Boise State. You know, we come in we have our protocols, we fill out the information every day. I think our trainers have done a great job of staying on top of that. Certainly, you know, we get information every week there might be a tweak here and there, and our players did a great job of adjusting the way that we need to and I think our guys have taken this very serious."

Harsin added that he thinks that the 2021 season may also be impacted if this season is delayed to the spring, emphasizing that players will need plenty of recovery time.

For a possible spring season, Harsin said he'd like to just use the 2020 schedule but that could push the following season back. One issue with a spring season would that it also negatively affect recruiting for the Broncos, Harsin explained.

"Recruiting, a big part of recruiting for us, is evaluation and be able to see these guys and we haven't had a chance to do that. You know, we can see on film, we can have conversations, we can talk and we've been doing that quite a bit but there's got to be some time in there built for recruiting," he said.

For current players, especially the senior class, Harsin said there needs to be more clarity for what happens next.

"When you're a senior, you want that year to be perfect right you want to have. You want to have an undefeated season, you want to go out there and play your best. You want to have a great experience. Maybe you have your degree or you're getting your degree at that time right if that all just come together. And then, you know, if you're good enough, you get that chance to go on and play it the next [level]," he said. "Right, I think that's always the vision. And that's what every senior wants. And right now, I think it's really hard to see that for some of the guys, and as much as I say, 'Hey, we'll try to be positive about it,' I don't have those answers for me either."

Boise State Athletic Director Curt Aspey said on Monday that the decision was made because the conference was concerned about the health and safety of all athletes. The decision will now leave a void in the heart of the Treasure Valley and cost millions.

Without Bronco Nation filling up Albertsons Stadium this fall, Boise's economy could lose nearly $15 million in activity and the university also faces a $20 million budget shortfall.

"Boise State is probably the biggest national brand in the Group of 5," said KTVB sports analyst Tom Scott. "So it's a familiar TV brand across the country. TV revenue isn't as big for Boise State's level as probably it should be but that's still significant."

"I read a lot about, you know, 'It's all, it's all money-driven' and things like that, I mean that's never come into this facility," he said. "You know, 'Hey, we have to for these reasons." It's been about the players, it's been about the safety, it's been about the health and well being. We all understand that there's a financial component to this. All right, we do understand that but at the end of the day, it still comes down to this model, this amateur model, that we have all right for college athletics. This is about the experience, this is about the players. Can we play, because we want to play? Can we do it? Can we do it safely? Is it the right thing to do? Because that's what we do, right? ...We all want to make this work for Boise State and we all want to try to figure out a way to help."