During his weekly press conference, Bronco Nation can expect Harsin to explain why Jaylon Henderson started over Hank Bachmeier and Chase Cord on Saturday. 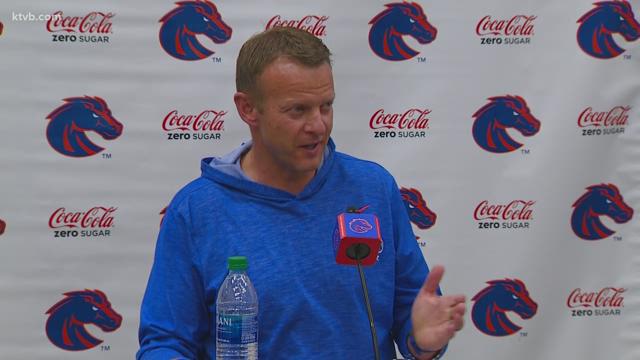 Harsin looked at senior quarterback Jaylon Henderson's play during his first D1 start, why Henderson was able to step in in his first start and earn Mountain West Play of the Week honors, previewed the Broncos' upcoming game against the Utah State Aggies, and what the game means for the Mountain Division.

The No. 20 Broncos travel to Logan, UT to take on the Aggies in a key matchup that will determine who will win the Mountain Division and go onto the Mountain West Conference Championship game. Just days after the Broncos' win, Harsin hasn't had much time to begin breaking down game film of the Aggies, but will likely discuss the series with Utah State and the importance of being prepared to win this game.

In last week's press conference, Harsin gave a rant of a lifetime with his "Twidiots" speech, where he discussed fan's criticism of an 8-1 team on social media. After that monologue, it will be interesting to see if Harsin gives another all-time speech.

RELATED: Boise State football: No Hank, no Chase, but there’s a Jaylon