During the Las Vegas Bowl press conference, coach Harsin made it clear what he wants to change moving forward from the university and the Mountain West Conference. 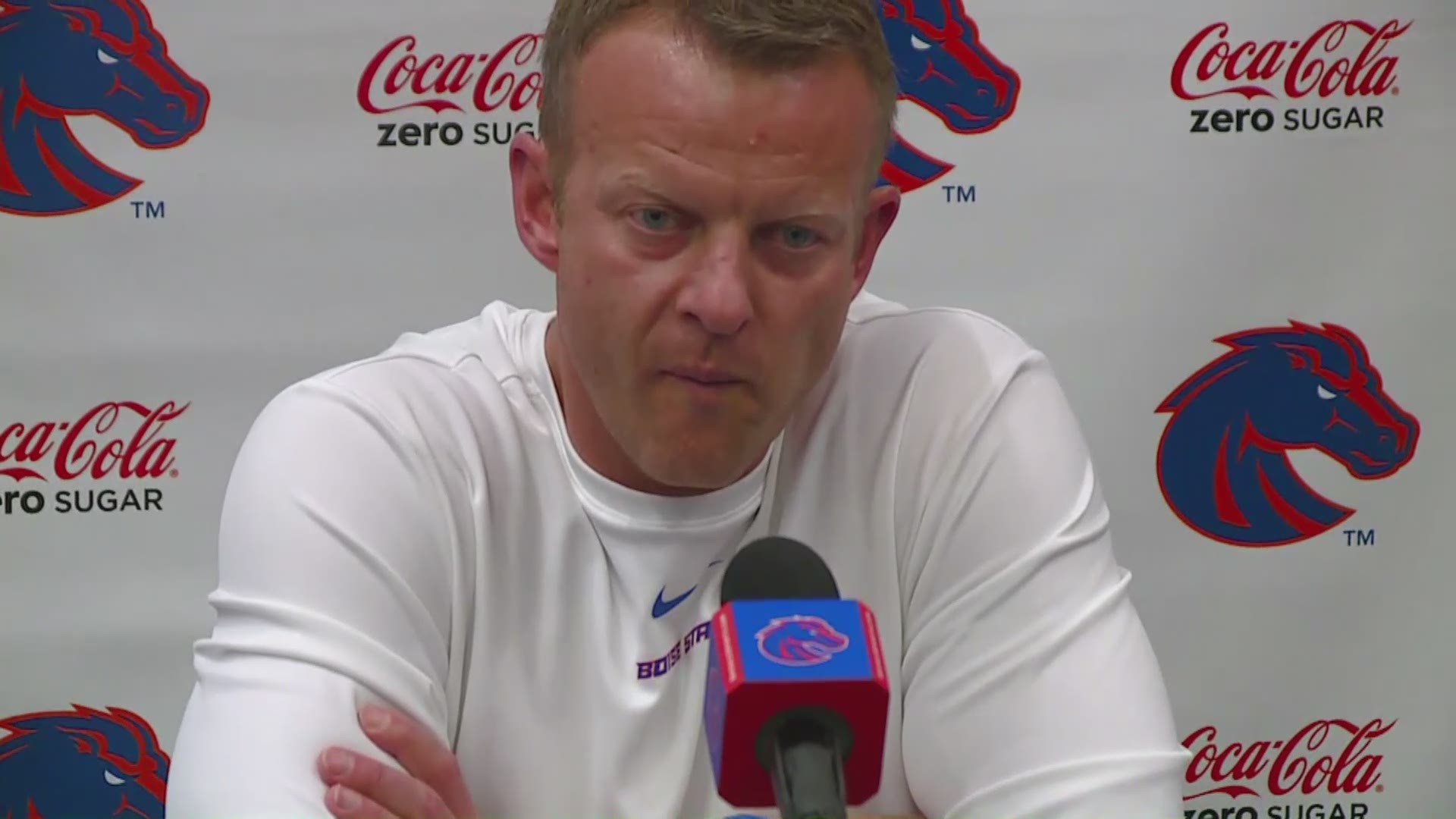 BOISE, Idaho — After the routine discussion and pleasantries about playing Washington and Chris Petersen in the Las Vegas Bowl were over, Boise State coach Bryan Harsin did something unexpected - he spoke candidly about what he wants to change at both the university level and conference level for the Broncos' football program and if and when he would leave his ala mater.

The press conference took a turn when Harsin was asked about if playing the Las Vegas Bowl was a let down when there was a possibility for the Broncos to play in the Cotton Bowl. From there, he started talking about what should change and what can be done better for the Broncos to get the opportunity to play in a New Year's Six Bowl.

"When things like this season are happening, you sure like to see our university and our conference do the most they can to put us in a position at the end of the year if everything else has been taken care of," he said.

Throughout the last several seasons, the American Athletic Conference's commissioner, Mike Aresco, has promoted schools like UCF and Memphis more recently to play in the College Football Playoff and in a New Year's Six Bowl - going as far as claiming that the conference is part of the "Power 6" conferences. During Sunday's press conference, Harsin didn't explicitly mention the American Conference's self-promotion but he did state that with a brand like Boise State that's different than everyone else it needs to be promoted.

"You need to take a program like Boise State and promote it," he said. "I see other conferences do that and I don't necessarily think we do a great job of that and I like to see it and do a better job of it. Certainly, I think those things need to be addressed and I don't think that we just stay and keep doing the same thing we've done every single year. That's not what we're about here and we talk about attacking, and that's the mindset."

For what else he wants to see change at Boise State, Harsin was light on specifics but said that with the Broncos' schedule for the 2020s, which includes home games with Florida State in 2020, Oklahoma State in 2021, Michigan State in 2022, and UCF in 2023, the university needs to move forward with making sure that they have the resources to stay competitive.

Despite being vague on what exactly needs to be addressed outside of promoting the team, he mentioned that the projects that have been in discussion need to put into place now.

"We've talked about it for a long time but it needs to happen now at this point and our league and our entire university need to be part of that," he said.

To wrap up the press conference, Harsin was clear about being linked to head coach jobs at different Power 5 schools every season.

"Let me say this - all that stuff that I think is out there - is just stuff," he stated.

The Boise native and former Bronco quarterback then explained what the program and university need to do for him to stay at Boise State and hinted at why he has stayed in Boise while other successful Group of 5 coaches move onto bigger Power 5 schools.

"I don't know if there's a lot of other people that bleed blue as much as I do and that's important. This place is important, we've built this... and I like to be a part of that and I enjoy that and I like to see where we have a chance to go," he said. "But at the same time, we have to keep building, we have to keep growing. Settling or same ol' same ol' - that's not the mentality and that's not what Boise State was ever built on was that type of mindset."

Three of the five coaches in the Group of 5 that won their conference championship have already been hired by Power 5 schools - only Harsin and Chuck Martin of the Miami (OH) Redhawks have stayed at their current schools.

For Harsin, he'll likely stay as Boise State's head coach as long as the program and university continuing building on its success and growing if his comments on Sunday are any indication.

"If we decide that we want to settle, settling is not a place that I want to be. If we want to get better, then I'm all about that," he said. "If we want to grow and develop and put ourself in a position where we can take that next step like we need to, with the type of opponents we're about to play moving forward, then those are the type of places that you want to be a part of."

"So as long as we're attacking, to me, that's the mindset," he said.

RELATED: No. 19 Boise State will play Washington in the Las Vegas Bowl

RELATED: Chris Petersen was never going to do this forever