After Thursday's close loss, the Broncos will return to The Blue on Sept. 10 to take on UTEP. 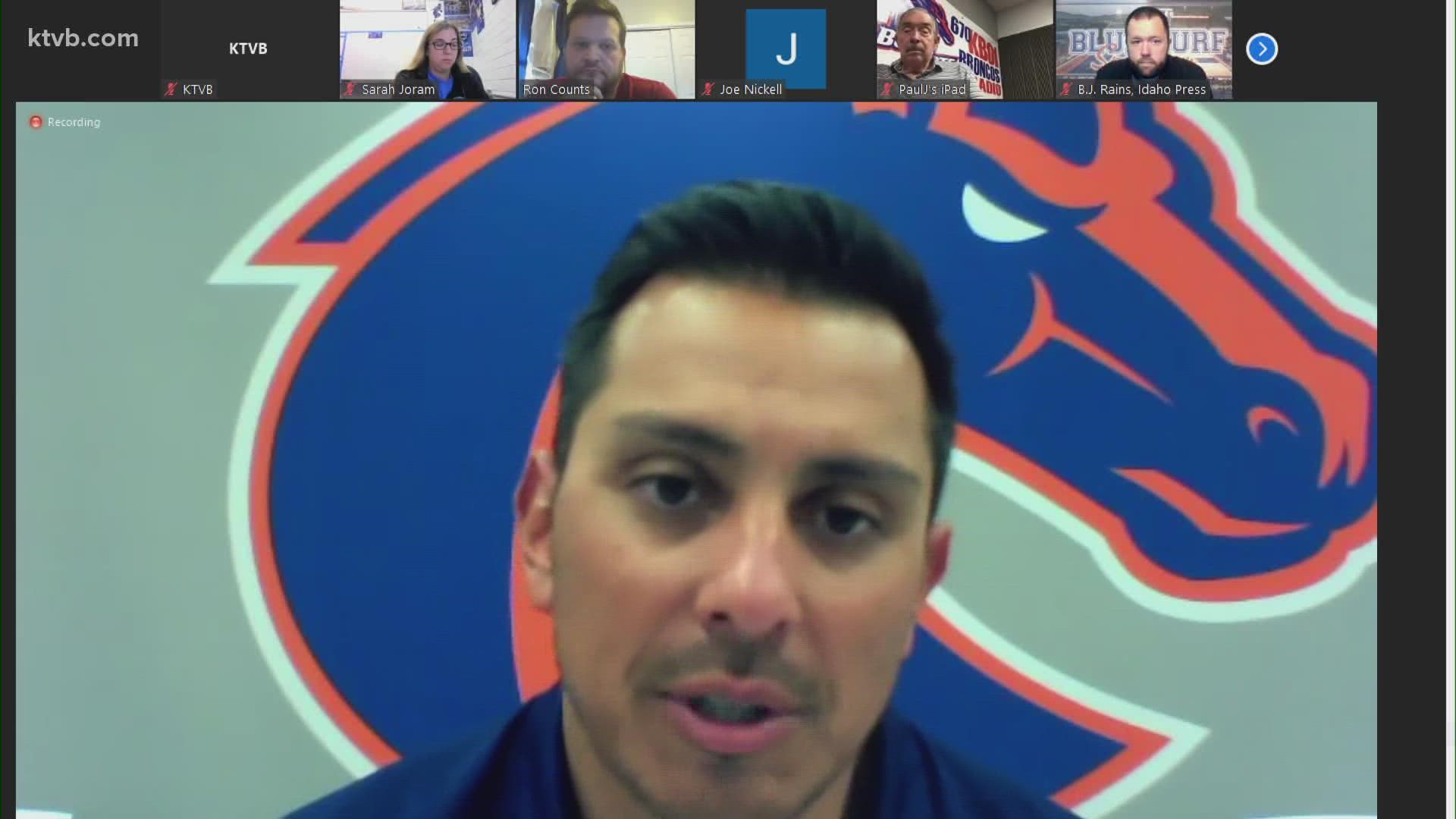 BOISE, Idaho — The Boise State football team's season opener against the University of Central Florida in Orlando was on Thursday. While the 31-36 loss to the Knights was heartbreaking and infuriating for many in Bronco Nation, there are still 11 regular-season games left for Boise State and the Broncos are returning to the friendly confines of The Blue in week two.

Before Boise State tries to record its first win of the season against the University of Texas-El Paso on Friday, Sept. 10, head coach Andy Avalos held a press conference on Sunday afternoon. Avalos was joined by defensive coordinator Spencer Danielson and offensive coordinator Tim Plough.

The first-year head coach reflected on the Broncos' five-point loss to UCF and look ahead to their home opener against the UTEP Miners. Avalos has not been part of a game against UTEP since he was a player for the Broncos.

"It was a physical game, an extremely physical game. There was some back and forth and there were a few special teams plays that had a big part in the game," he recalled. "We had some unbelievable matches, they had some really good players as we start to look at the film over the last couple days and look at what they look like this year. They have some explosive players on both sides of the ball. It's going to be a physical game, especially up front with the way they run the ball."

In addition to potential challenges presented by UTEP's front line, nearly half of the Broncos will also experience their first home game with fans in Albertsons Stadium. As someone who has experienced game day at Albertsons Stadium as both a player and coach, Avalos said the energy in the stadium is unmatched.

After analyzing the game against UCF, Avalos said the team is very proud of staying in the fight until the end. He said the team was able to analyze what they looked like at their best and figure out what did and did not work.

"If you watch that first half and see us get into our rhythm and get into our tempo and distribute the ball to a lot of people, that's really what we want to do, that's what we want our identity to be," Plough said. "You look at that third-quarter, which a lot of people are going to focus on, and there's just so many things that go into us struggling there. Great opportunity to learn from that and grow from it."

Plough said the only way to win a football game is to be able to run the football and stop the run. He added that a lot goes into the team's run plays and almost every run play the team has will include a pass option.

Danielson described what went wrong in the run game against UCF, saying it was "disappointing" but something for the team to improve on for the upcoming home game.

"There's things we got to clean up out front, from the D-line to the edge players, there's tackling issues," he said. "There's some situations where they ran the ball, we thought they were going to pass. I probably could have put them in a better call. I take responsibility of it."

Immediately after the Broncos' game against UCF, Avalos and Plough held a post-game press conference where Avalos called the loss heartbreaking and Plough shouldered the blame for the offense's second-half woes.

"It's heartbreaking that we didn't finish," Avalos said. "We didn't finish the game. But the biggest thing for us is we're excited about who we can become and where we can grow from here."

Heading into week two, the Broncos will likely focus on the running game, which should be boosted with a healthy George Holani, who was held out of the UCF game, and wide receiver Khalil Shakir, who was on a rep count during the game.

With Holani and Shakir back at 100% against UTEP, the Broncos' offense should rebound after only getting. Running back Andrew Van Buren led Boise State's rushing attack with ten carries for 26 yards. Oregon transfer running back Cyrus Habibi-Likio led ended the game with 12 carries for 23 yards.

"We all know that we need to establish the run game, we can't just drop back and throw the ball every play, so that hurt us," Plough said.

Following Sunday's press conference, this article will have individual clips of each of the coaches' interviews. Check back for updates.