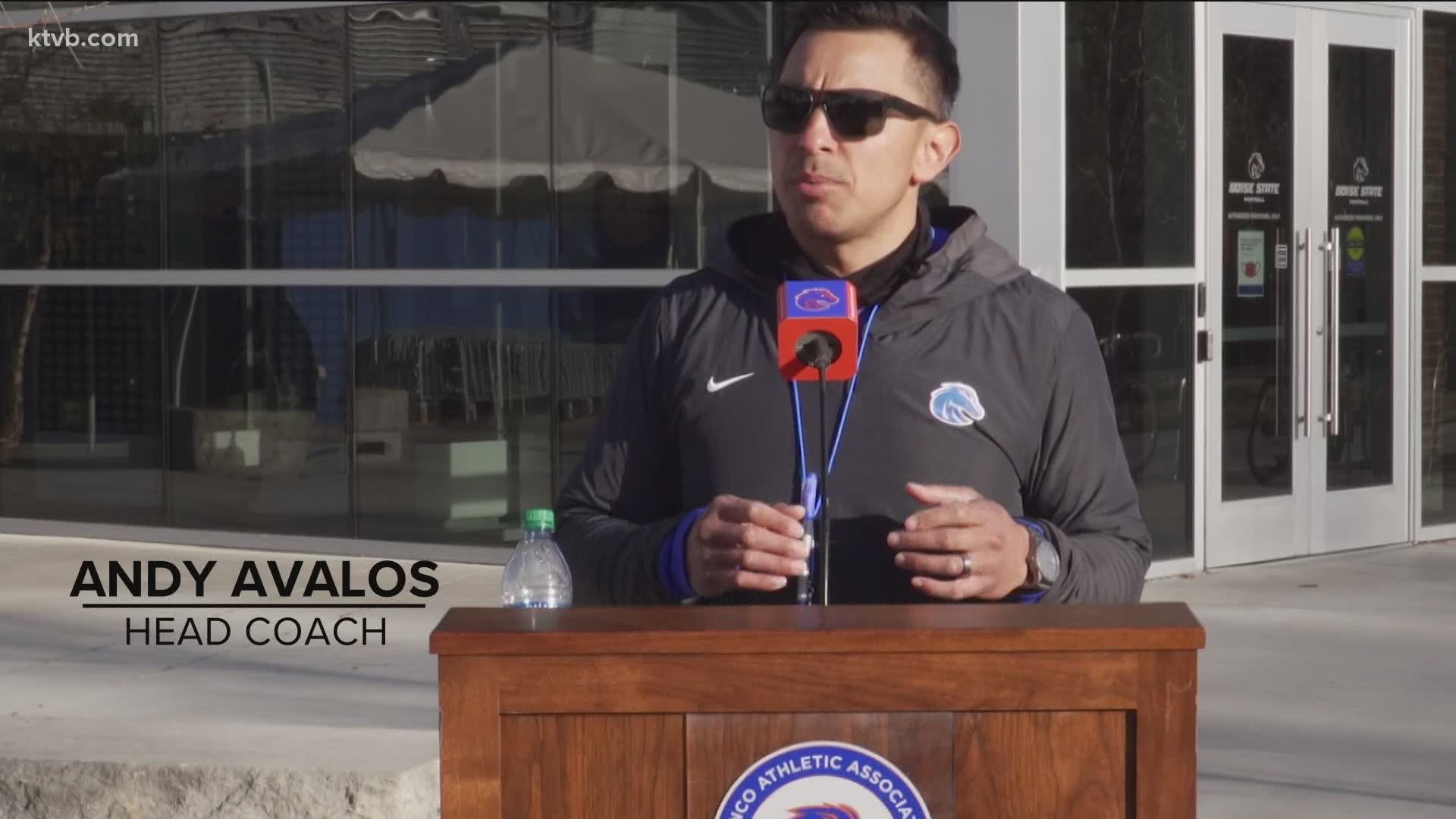 BOISE, Idaho — Since 2000, Bronco Nation has witnessed four head football coaching eras, each building on top of what their predecessors accomplished. None have had to build a new culture during a global pandemic but first-year head coach Andy Avalos is doing just that ahead of the Spring Game on Saturday.

The former Boise State linebacker and defensive coordinator emphasized that day-in, day-out habits between coaches and players will be key to building the culture that they want to live in. He explained that much like defense, offense and special teams, the team needs to install new habits.

"We're excited to get moving back forward and feel like the teams made a bunch of progress on the field," he said during a press conference on Wednesday. "Off the field more importantly, how we're going together as a family, habits that habit so we're installing and living by every day in our environment that we want to create is going to help us grow, continue to grow."

The Spring Game is at 3:30 p.m. Saturday at Albertsons Stadium and 6,300 fans will be allowed in attendance. There will be free parking in the stadium lot and all concessions will be prepackaged and grab-and-go, according to the university.

For Avalos, the Spring Game represents a step towards a post-pandemic normal, whatever that means.

Wednesday was the last practice before Saturday's Spring Game and Avalos said the Broncos are focused on improving every day and working towards a new culture.

"Everybody wants to talk about culture and drop that word, there's a lot of things that build a culture where we're working very hard and trying to focus our everyday priorities on the habits that are going to create that culture, getting reps and doing those things and living by these habits," he said.

I don't know what they're calling it, but the hype circle the #BoiseState football team is doing before practice is new and AWESOME!

In his press conference on Wednesday, Avalos addressed the new format for the Spring Game, how many alumni will be at the game and the state of the quarterback competition.

While sophomore quarterback Hank Bachmeier led the Broncos in passing yards in 2019 and 2020, his health opened for the door for other quarterbacks on the roster to step in. With a new head coach, the quarterback competition is wide open in 2021.

In 2019, Jaylon Henderson led Boise State to a Mountain West Championship with 1,080 yards, 12 touchdowns and two interceptions after Bachmeier was out for much of the season. But Henderson was benched by former head coach Bryan Harsin in the Las Vegas Bowl against the Washington Huskies for Bachmeier, who ended the game with 119 passing yards, an average passing attempt of 1.1 yards and two interceptions. The Broncos' lone score was a touchdown by Henderson.

In 2020, Bachmeier was out for several games due to COVID-19 protocols, which allowed USC grad transfer Jack Sears to start against Air Force on Oct. 31, where he went 17-for-20 for 280 yards and three touchdowns, plus a rushing touchdown.

Sears would go out of the game the following week against BYU with a head injury, forcing untested freshmen Andy Peters and Cade Fennegan to take on a solid Cougars defense. Boise State lost 51-17.

With a new coach and offensive coordinator going into the 2021 season, the Broncos' quarterback competition is something to watch.

'Those guys are doing awesome'

"I know we want to talk about the quarterback situation and those guys are doing awesome," Avalos said. He added that the staff isn't strictly looking at each quarterback's stats and percentages but also how they're a leader on and off the field.

"It starts with their leadership, off the field, how they're bringing guys together, how they're building confidence within each other, to work together when we get on the field together. And they're doing a really good job at that stuff and we're excited to continue to build those relationships because when we get on the field, then allows us to operate to compete together, and that's really where it starts at the quarterback position, and how those guys are competing on the field."

Fun getting out to watch a little practice today. Looking forward to the Spring Game on Saturday! pic.twitter.com/8dGwYefOPr

Under new offensive coordinator Tim Plough, Avalos said Bronco Nation can expect a different type and style of offense in the Spring Game.

He described the offense as explosive with precision,

Saturday's Spring Game will be set up as offense versus defense, with both being in their own locker rooms before the game. The game will feature eight-minute quarters and offense and defense will warm up on opposing sides of the field before kickoff, Avalos explained on Wednesday. Offense and defense will be live but special teams will not.

The university announced the format of the game on Thursday. The offense will score six points for touchdowns, three for field goals, one point for PATs and one point for an explosive play, either a run of 12 yards or more or a pass of 16 yards or more.

On defense, a touchdown is worth six points, a turnover or stop on fourth down is three points, two points for sacks or three and outs and forcing a field goal attempt in the red zone is worth four points.

The first-year head coach explained that players will play physical on Saturday, even if it is just a scrimmage. He added that players won't be reckless and they address that daily with their mindsets and how they control themselves.

"The physicality, that's what we breathe and how we do that is everything," he said. "We will not be out of control. We will not be reckless because we're playing physical. We're gonna play physical under control with the right mindset and not compromise each other, and that has been our message here all along. Our physicality always has to be under control."

Avalos said he expects about 100 alums of the football program to be in attendance for the Spring Game. Four former players will also be honorary captains for the game.

On defense, former linebackers Shea McClellin and Tanner Vallejo will be honorary captains. Vallejo currently plays for the Arizona Cardinals and McClellin retired in 2018 from football due to repeated concussions, but won a Super Bowl with the New England Patriots in 2016.

Former offensive lineman Matt Paradis and running back Alexander Mattison will be honorary captains on offense. Paradis is the starting center for the Carolina Panthers and Mattison plays for the Minnesota Vikings and was drafted in the third round in 2019.

Bringing former players in as honorary captains is a new tradition that Avalos is beginning this year.

"Those guys teach us things when they come back. They teach us and we're there for them when they need us as well," he said. "And so, you know we can't have our social like we usually have, we will have that for sure next year brothers, and, but this year we're not. Its exciting to see the guys are still coming back though and we want to continue to build that."

He added that having former players back on The Blue is big for everyone.

"The former alumni that have been able to come to practices, it's inspiring for our current players and our current coaches," he said. "It is also very beneficial, to always have a reminder of who we are, where we've come from and what it's going to take."