'It's awesome': After years away from the Blue, Matt Miller is excited to be back at Boise State

It's been over five years since Miller left Boise State, but he told KTVB that he's excited to get to work with a loaded and experienced wide receiving corp. 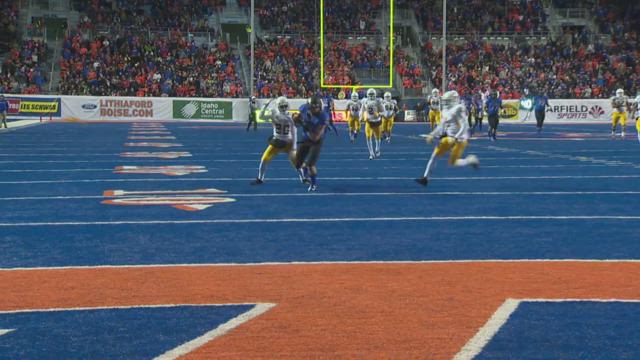 BOISE, Idaho — Matt Miller, one Boise State's greatest wide receivers, is returning to his ala mater as the Broncos' next wide receivers coach and passing game coordinator. As one of the toughest players to play on the Blue, he's ready to coach a talented wide receiving corp and instill a "dog mentality" that'll be "feared" in all facets of the offense.

Since graduating in 2014, Miller was a graduate assistant under coach Bryan Harsin for a single season before heading to Bozeman, Montana to be Montana State's wide receivers coach in 2016 and 2017. In 2018, the Boise State product was then promoted to offensive coordinator and quarterbacks coach.

Even though he was leading the Bobcats' offense into the FCS playoffs, Miller knew it was the right time to move on and find new ways to grow as a coach. The timing of Boise State's search for a new wide receivers coach was perfect for the former Bronco star.

"It was a lot of fun [at Montana State], learned a lot of football, met a lot of great people and we had some success there in Bozeman in the last four years but it was also time for me to challenge myself, get into a different role and go learn more," he said, "and do things a little bit differently than what I was doing. Now, it's good for me to take a step back and really examine that and become a better football coach at the end of the day."

MORE: Boise State football: A guy who knows what it’s all about

One of the first things that Miller noticed when he returned to Boise was the Treasure Valley's rapid growth and development that has happened in the five years since he left the City of Trees.

"You just drive downtown for the first time and I'm like, 'That's a new hotel, that's a new hotel, there's a new restaurant, there's a new restaurant.' And then you get to drive west towards Meridian and I'm like 'Holy smokes. What the heck is going on here?'" he said. "It's an awesome community and its awesome that it's growing and it still has that same old feel that it had when we were in college together."

While away from Boise, Miller married another Boise State grad, Sarah, who Miller says is more competitive than he is. He said his wife, who was an All-American volleyball player, will also enjoy all of the growth that the Treasure Valley has seen since they've been away.

"I'm excited for Sarah to get down here and see it too cause she'll be very surprised too about all the new developments in town but I know she'll like it because there's plenty of shopping out in that Village for her," he said.

While coaching at Montana State, Miller had the goal of returning to Boise State.

"It's an awesome opportunity to be back in Boise. It's a place that I obviously fell in love with when I came to school here," he said. "It's always been a goal of mine to get down back here, so when the opportunity to coach wide receivers, at my ala mater, the position I played, [it was] an opportunity that I couldn't pass up. Excited to get to work."

Now that he's back on campus, Miller will be working with a talented group of wide receivers that includes Khalil Shakir, CT Thomas, and Octavius Evans. The three combined for over 1,600 yards and 12 touchdowns last season while playing with three different quarterbacks. With the talent that this group of receivers has, Miller is now focused on instilling a new mindset in them so they'll be feared by opposing defenses.

"I'm a big mindset guy. I've played the game with the right mentality, I believe. There's a toughness, there's a physicality that comes along with a "soft position," we're gonna change that," he explained. We're gonna be a physical outfit and be feared, not just in the pass game but in the run game too."

The Helena native is the new wide receivers coach after Eric Kiesau was promoted to the Broncos' offensive coordinator when Zak Hill left the coaching staff for Arizona State. Miller inherits not only a group of skilled players but also great young men that have welcomed him back to his ala mater with open arms.

"I thank Coach Kiesau every day because they are some talented wide receivers, but most importantly, they're great dudes. They care about each other. They're a tight-knit group," he explained. "They welcomed me in with open arms, which I know isn't the easiest thing to do sometimes with new position coaches."

While next season is still months away, Miller is already setting new challenges for himself and his players.

"I think we got a good thing going in that room, now my challenge is to make those guys just 1% better every day so when it comes next fall, we can really make a splash with this thing," he said.

Miller might hold some of the biggest school receiving records, including single-season receptions with 88 and career receptions, he said he hopes that his players break them so he can stop talking about them.

"The only record I care about is wins and losses," he said.

RELATED: Decade in Review: 11 biggest moments in Boise State football in the 2010s