The teams will kick off the 2020 season on Saturday night in an empty Albertsons Stadium. 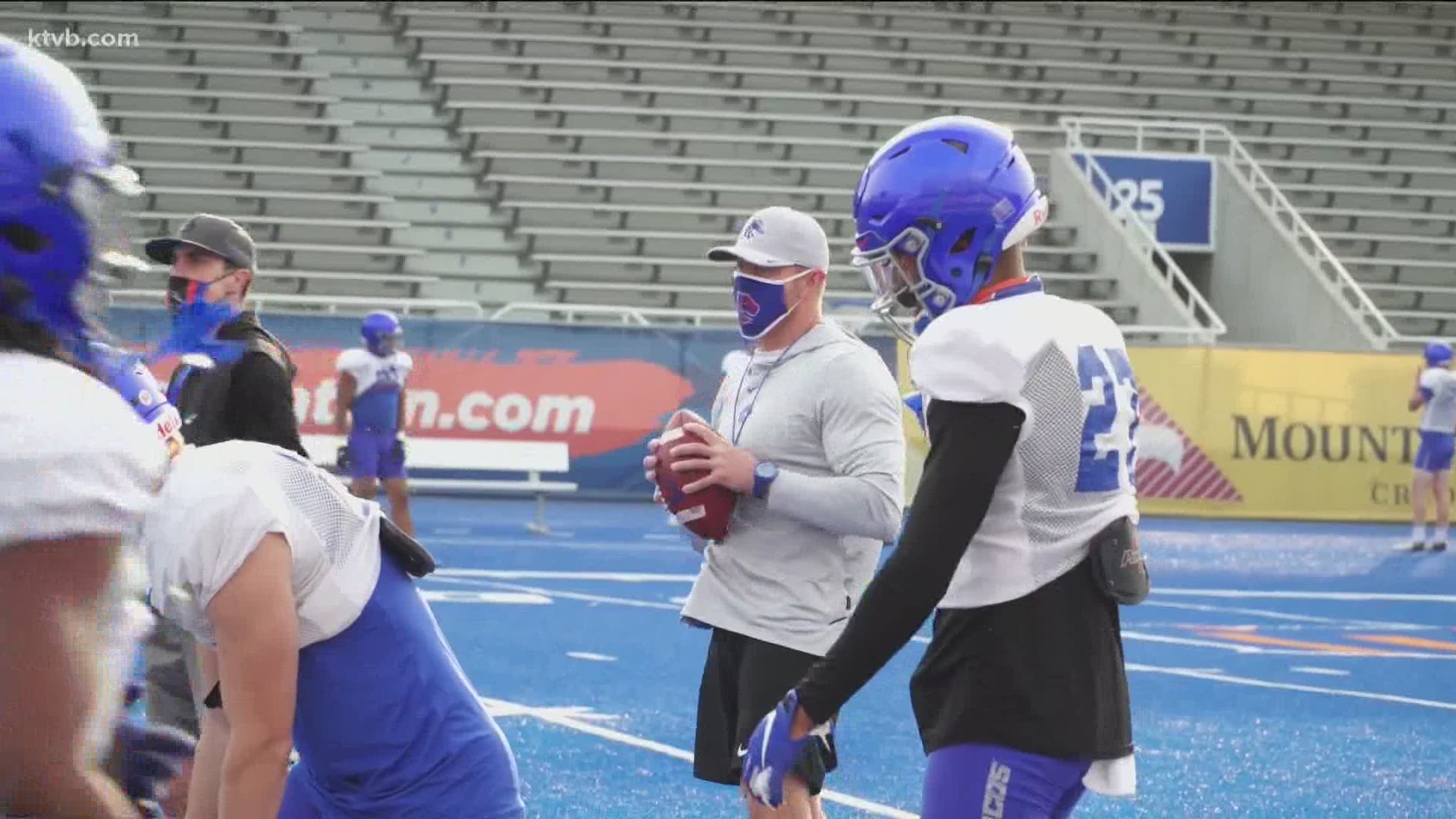 BOISE, Idaho — Boise State will open its abbreviated 2020 football season on Saturday, Oct. 24 with a home game against Utah State.

The Mountain Division matchup is scheduled to kick off at 5:10 p.m. and will air on Fox Sports 1 (FS1).

Due to the coronavirus pandemic, there will be no fans in the stands at Albertsons Stadium. But there will be cardboard cutouts, similar to what many other college and professional teams have done when local health restrictions prevent thousands of fans from gathering in one place.

The game against the Aggies will be the Broncos' first of eight regular-season games. Seven of the games will be against Mountain West Conference opponents and the eighth will be a home game against BYU on Nov. 6.

The Broncos could potentially play two more times after the regular season. They will play a ninth game if they earn a berth in the Mountain West Championship game; this year, the participants will be the two teams with the highest winning percentage, regardless of division. Chances are also very good that Boise State will get a trip to a bowl game for the 19th consecutive year.

Coach Bryan Harsin said during his game-week press conference on Monday that his team is both excited and grateful to be playing an actual football game this week.

"There's just more energy, more enthusiasm, there's obviously that extra bit of excitement because you get to go play somebody else," Harsin said. "It's fun to be back in that game mode. Just kind of getting back and doing things that you love to do, how that changes your outlook on so many things."

The Broncos - especially the seniors - have embraced an "attitude of gratitude," according to Harsin.

"That's been a part of this program for a while," he said. "We get to go play football, there's a lot of real things happening around the country, we're grateful we get to go as a football team and deal with those things together."

"We expect to go out there and compete at a high level, just as I'm sure they do," Andersen said. "This year has been different for everybody, but at the end of the day, these kids get to line up against each other with Boise versus Utah State for three hours... and we'll see exactly where we sit and they'll see exactly where they sit."

The game will be televised on Fox Sports 1 (Kevin Fitzgerald, Robert Smith), which can be found on the following channels:

The game will stream live on the Fox Sports website, as well on the Fox Sports mobile app, available in Apple and Android app stores. The service is only available to subscribers of participating cable and satellite television providers (including Sparklight, Dish Network, Hulu and DirecTV).

KTVB's Bronco Roundup Game Day show will be live from Albertsons Stadium before the game from 4 to 5 p.m. on KTVB, KTVB.COM, and on the KTVB mobile app.

Join Jay Tust, Will Hall and special guests live on the Blue for a look at all of the major storylines surrounding this matchup.

NO FANS IN THE STANDS

Boise State's home games, at least at the beginning of the season, will take place in an empty Albertsons Stadium.

Boise State Associate Athletic Director Joe Nickell said the university worked with public health officials and ultimately decided it was in the interest of public health that no fans attend games at the stadium.

Nickell added that the university "will continue to monitor the situation in the Treasure Valley throughout the course of the season."

In lieu of actual fans in the stands, the university is selling personalized cut-outs, in which fans can upload a photo. The cut-outs will then be placed in seats during home games. The cut-outs cost $50 each and fans will be able to pick them up at the end of the season.

Fans looking to support the Broncos (or Aggies) at Albertsons Stadium will need to find another location to cheer their team on. The university told KTVB this week that tailgating in the stadium parking lot will be prohibited. The new rule is expected to remain in place until fans are allowed back into the stadium on game days.

Due to the abbreviated season, Boise State lost four games from the initial 2020 schedule – three non-conference games and a divisional Mountain West opponent.

Georgia Southern and Florida State were each supposed to travel to Albertsons Stadium, and the Broncos were set to visit Marshall and New Mexico. All four games have been removed from the 2020 schedule.

The Broncos' game against UNLV, originally scheduled to be played in Boise, was adjusted to a road game.

In a normal season, we would have a pretty good idea of Boise State's strengths and weaknesses by the end of October. But this isn't a normal season.

One thing is certain though: there is no quarterback battle heading into Game 1. The Broncos released their inaugural depth chart of the season, and sophomore Hank Bachmeier is firmly entrenched in the starting spot.

Harsin said earlier this month that he's expecting Bachmeier to take the next step as the Broncos' signal-caller.

"I think a lot of the mistakes that Hank made, you want to see him make new mistakes," Harsin said. "That's the simplest way I can put it for how I think a quarterback develops. You make mistakes the previous year, don't make the same mistake, make new ones.

"It's not about being perfect, it's just about learning what you did the year before and now there's that natural progression, don't make that same mistake, lets make new ones," he added. "He's got to become a big part of this offense, as far as how we do things and his input is crucial now."

MORE: Breaking down the first Boise State depth chart of 2020 and ahead of the Broncos game against Utah State

As for Sears, Harsin said the USC grad transfer will have an important role in the offense this season.

"Jack's very talented," he said. "[He] throws the ball well, he's athletic and I think he's competitive. He's a very focused player, and I like that about him. I like that he is driven, every single day he has a purpose and he wants to get better at whatever it is we have discussed and he'll hone in on that and work on it," said Harsin.

As for Utah State, the Aggies have the unenviable task of replacing all-Mountain West star Jordan Love, who was drafted by Green Bay in the first round of the NFL draft.

Junior Jason Shelley will take the first snaps at quarterback on Saturday, coach Gary Andersen said during his news conference on Monday. Sophomore Andrew Peasley is also expected to see some playing time.

"There has been some back and forth, which we expect," he said. "They both want to play and they both want to compete. Jason will go out and take the next snap, but it's not off the table to have Andrew come in and play and I think they both deserve an opportunity to have a chance to be able to compete.

"How they react and how they go out and play, that's the next step," Andersen added.

Boise State leads the all-time series 19-5 in a rivalry that stretches back nearly half a century. The Broncos and Aggies first played in 1975, a 42-19 Utah State win at Bronco Stadium. The teams played sporadically until the mid-90s and now play annually as divisional foes in the Mountain West Conference.

The Broncos have dominated the series since both teams joined the conference, many of the wins coming as blowouts. The lone exception was a Boise State trip to Logan in 2015 - when the Aggies beat the Broncos 52-26.

Last year's meeting between the teams decided the Mountain Division when No. 23 Boise State defeated Utah State in Logan on Nov. 23.

The Broncos are 10-2 when playing in Boise, with the last home loss to the Aggies happening way back in 1996. Boise State won the last meeting at Albertsons Stadium, 33-24, in 2018.